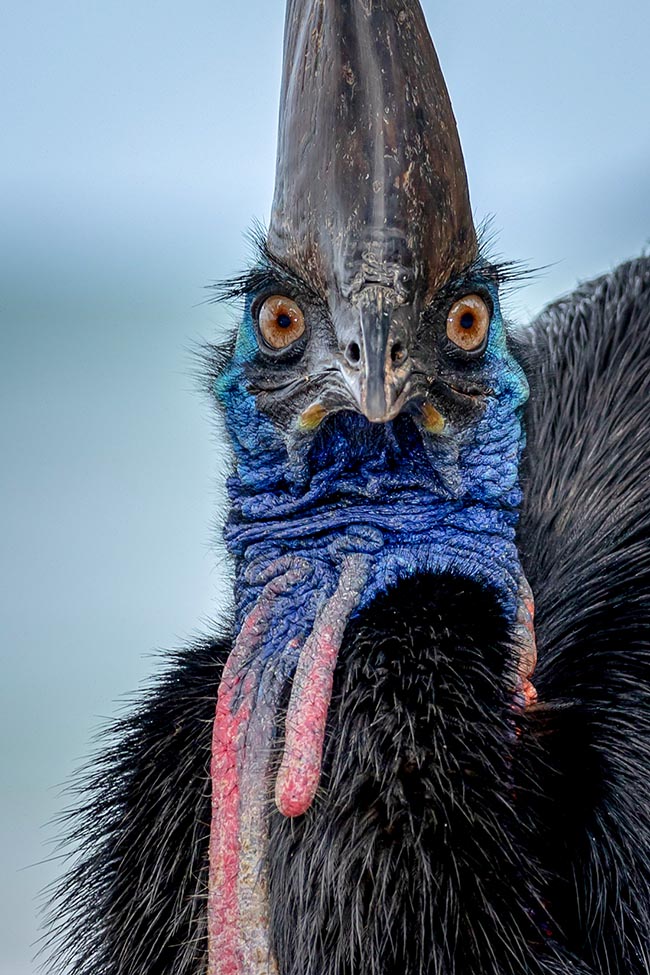 Looks odd, but Southern cassowary or Australian cassowary (Casuarius casuarius) is one of the most dangerous terrestrial animals and surely the most fearful of its similars © Julien Rouard – Dreamtime Nature Photography

It seems strange but scrolling through the pages of the Guinness World Record Book we find, among the curiosities of the natural world, a bird that is pointed out as one of the most dangerous terrestrial animals and surely the most fearsome among its similars.

Shy bird and unknown to many, though massive and large living in hidden places in areas often inaccessible and that does not hesitate, to defend itself and its progeny, to attack the human being with such a strength that can cause its death.

Usually, we consider the birds as gentle and timid beings, defenseless towards man and unattainable to envy them when we see them hovering in the air.

And yet, we know the unforeseeable strength of the Ostrich (Struthio camelus), the aggressiveness of the birds of prey, the insane greed of the vultures but all is forgiven by their grace and beauty but also by the fact that they do not jeopardize our life.

The Double-wattled cassowary or Australian cassowary (Casuarius casuarius (Linnaeus 1758)) belongs to the order of the Struthioniformes and to the family of the Casuariidae and is, like all membres of this order, an apterous bird, that is, a bird unable to fly.

We know that the Ostrich at times has very strong reactions towards the aggressors.

When it sees the possibility of winning the fight, here it is facing a small feline or the jackals trying to attack its progeny or, spreading its wings and swelling the feathers of the sides, multiplying its already remarkable dimensions frightening whoever is disturbing its peace.

In rare instances it has been able to face even the human being displaying an aggressiveness that only a bird weighing 150 kg is able to show.

The Australian cassowary is different. In the size as well as in the behaviour. As soon as it sees a being crossing its own territory and, more, jeopardizing its progeny, it attacks head down without making distinctions of size or aggressiveness of the intruder. It just attacks.

Knowing something about this the Australians of the Cape York Peninsula in northern Queensland have scattered the whole area where it lives, with road signs along the ways inviting passersby to not enter the forest without precaution, spaced with others that invite them to pay attention to the specimens crossing the road. 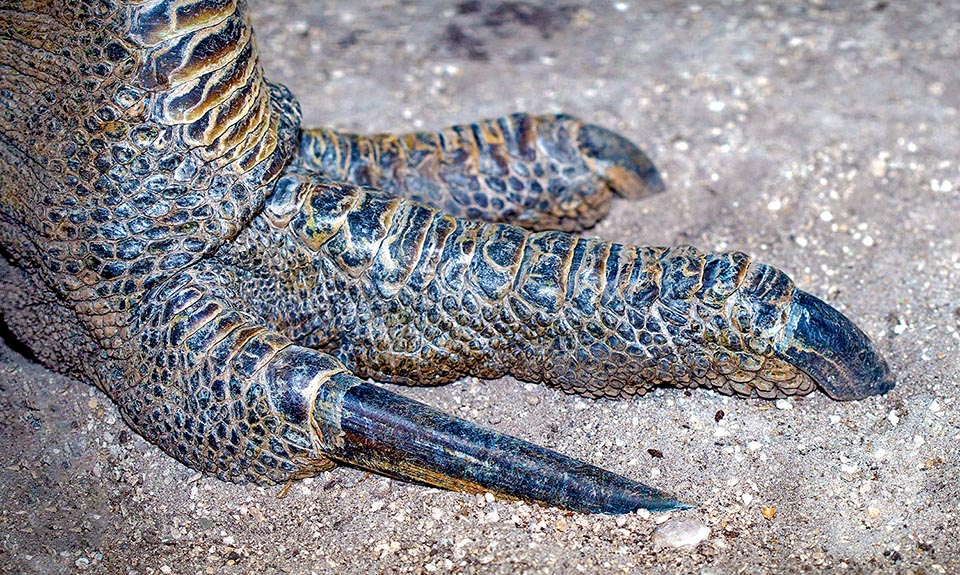 In fact, the foot has a claw sharp as a blade that can exceed 10 cm. A fatal weapon, used with violent kicks that tear the intruders’ body apart © Giuseppe Mazza

Also the natives of the New Guinea and of the Indonesian Irian Jaya know its strength but this does not prevent them to hunt it for the meat and the strange feathers but even more for the bones of its legs with which they prepare splendid daggers. Legs so robust and with such thick bones to allow them to get more than 30 cm blades, strong as they were steel and made razor sharp.

The etymology of the scientific name gets its origin from the local epithet “kasuari”, given by the Malaysians when they met it centuries ago before their wandering among these remote islands. 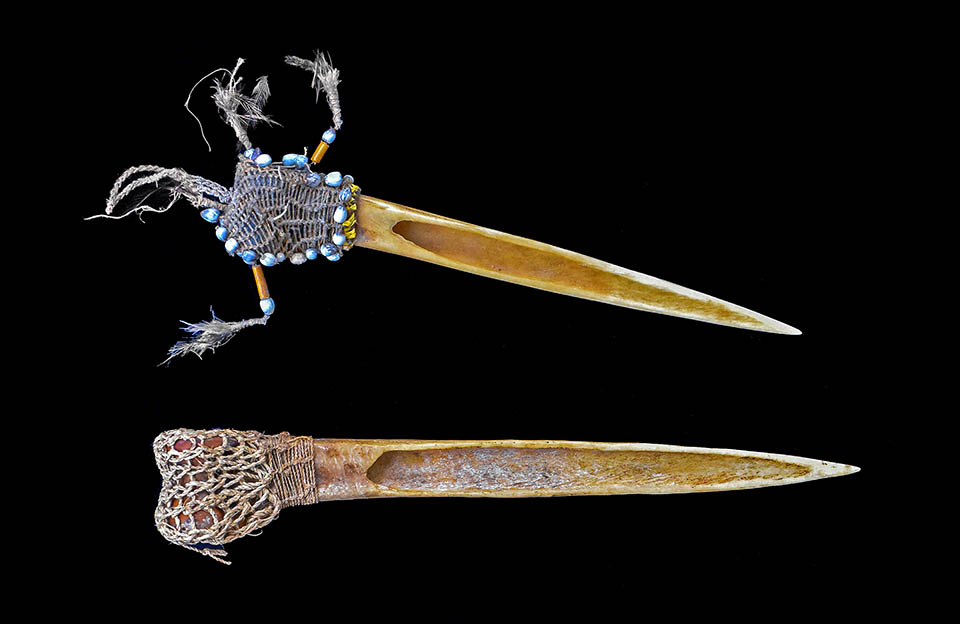 The legs have so much thick bones that the natives get from them blades of more than 30 cm, as strong as steel and sharp as razors © Gianfranco Colombo

The territory inhabited by this bird is very limited and this condition renders it an endangered species. It is present in New Guinea, in particular in the Irian Jaya, the Indonesian part of the island and in eastern Queensland in the coastal belt of the peninsula of Cape York. It lives even apart in the Indonesian islands of Aru and Ceram. 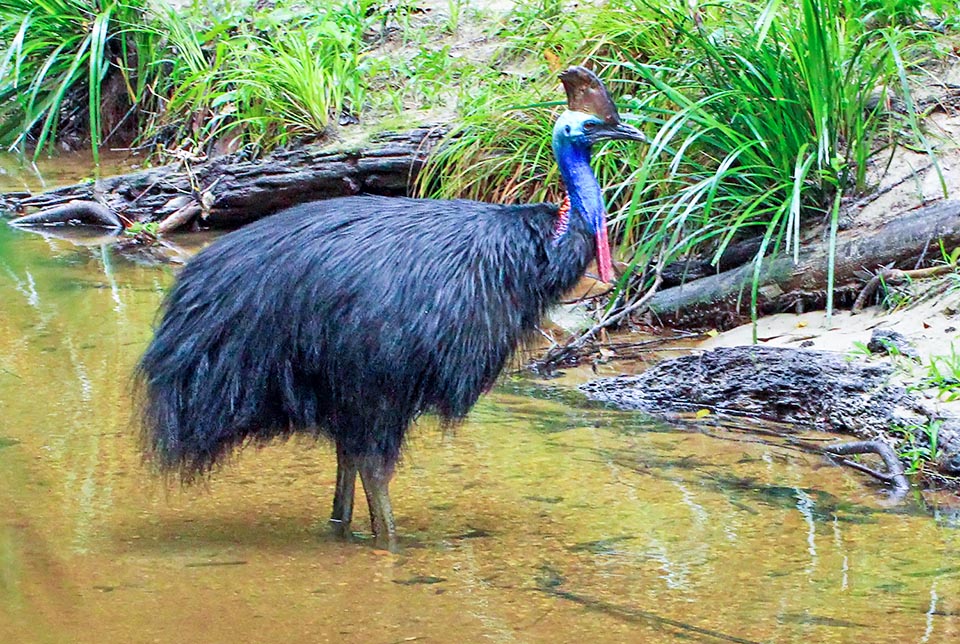 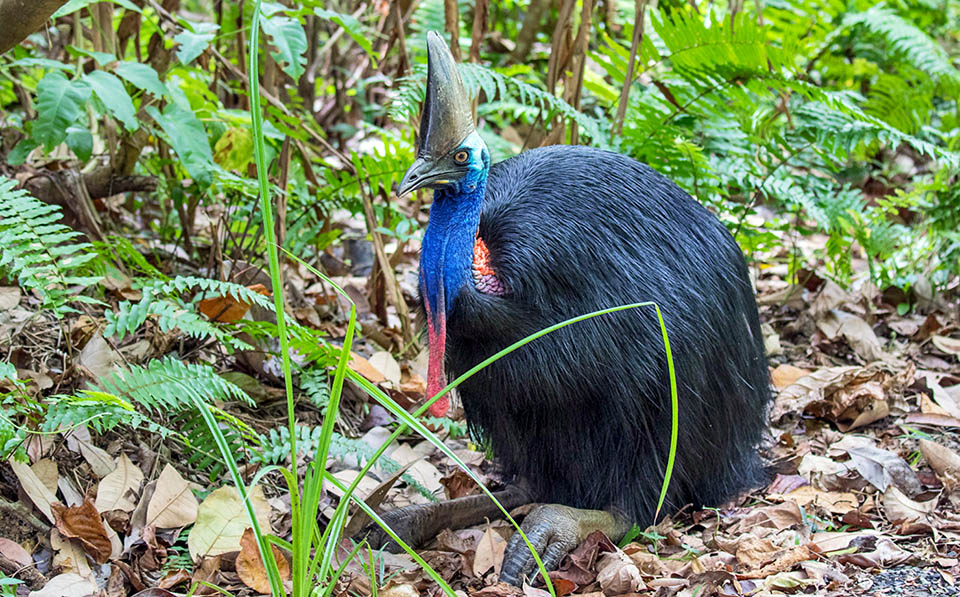 It is an endangered bird, extremely shy, living often in the impenetrable undergrowth and it’s difficult to evaluate the right consistency of populations © Peter Boman

Extremely shy bird, the Australian cassowary lived in dense and thick rainforests, with impenetrable undergrowth, preferably lapped by the sea and dotted with marshes, water streams and reed beds. An isolated and poorly frequented forest with limited inacessibility. It is so true that the only way for observing it in these areas is to see it suddenly crossing the roads that intersect these territories.

This characteristic of invisibility is also cause of the inability to evaluate the exact consistency of the populations in those little anthropized or unknown areas. 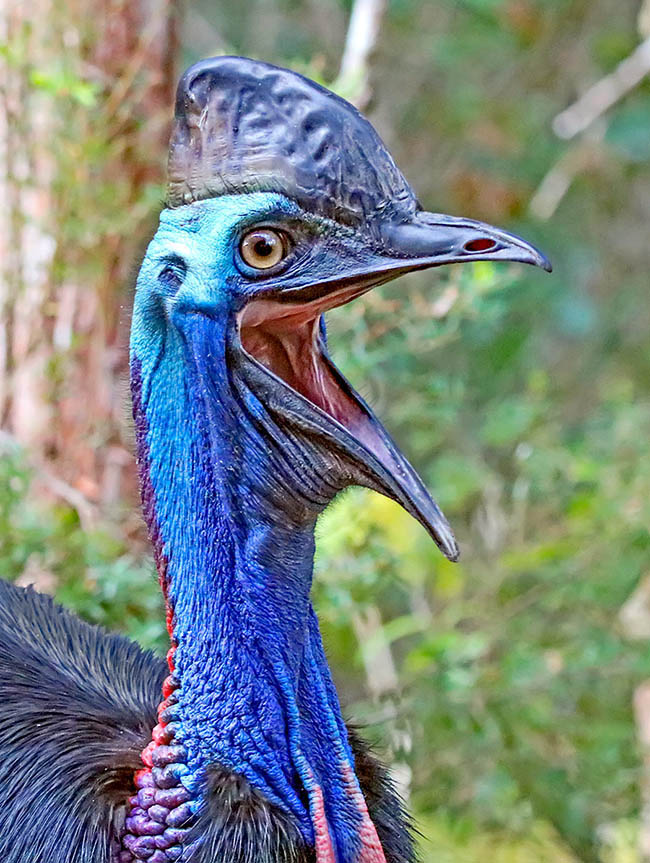 Young female. Cassowary is a polyandric bird. The females usually mate every season with more males building up several nests: small depressions full of withered leaves sheltered by a bush or by a tree © Lorraine Harris

Also in more habited areas it is however quite difficult to realize a sure evaluation.

The Australian cassowary has a remarkable size, even if much more reduced than an African Ostrich, but its massive structure, its stubby legs and the rounded body, give immediately the idea of how strong and bellicose it can be.

Together with the Emu (Dromaius novaehollandiae), it holds the record of being the biggest bird of the Asian continent and of Oceania and the second in absolute after the Ostrich.

The female is bigger than the male and can reach the length of 190 cm and attain 70 kg (60 on average) of weight.

Conversely, the latter reaches 170 cm of length and 35 kg of weight.

The livery is completely greyish formed by fine crinkly and bristly feathers, unsuitable for the flight, especially since it is practically devoid of an alar structure as it does not have remiges and those of the tail.

The neck is bare in the upper part and presents a bright blue turquoise colouration covering also the head up to the nape where the colour gets paler.

From the fore part of the neck hang two immense, even 20 cm long, wattles of bright red colour.

The bill is rather short and flat and is always lead in colour.

On the head is present a very strange and archaic fleshy crest, made of keratin, of greyish colour that reaches to touch the upper jaw of the bill, also bare and more or less raised and protruding depending on the age and the sex and up to 18 cm high.

Often, it is worn and frayed due to the continuous chafing with the vegetation and reveals cracks and crevices as if it was modelled with clay. While looking at this appendage it is not difficult to remember those flesh crests of the dinosaurs that we see, remade, in the museums of the whole world. 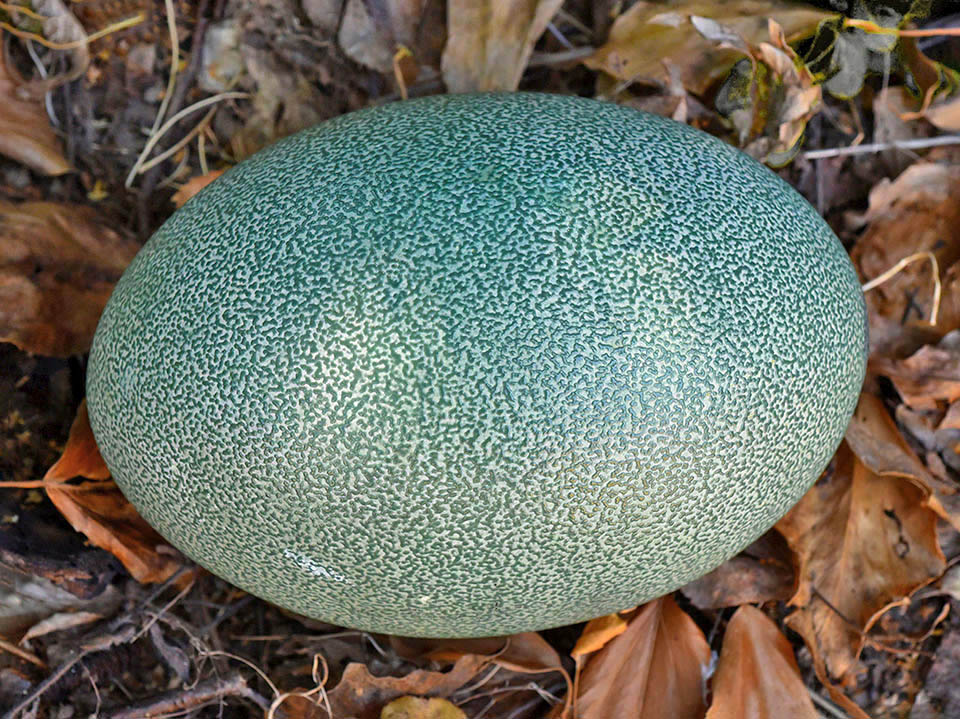 The female lays 3-5 bluish eggs, highly rugose and wrinkled, but their are hatched by the male for about 50 days © Gianfranco Colombo

Even more, if we observe the legs and the feet. The first ones are stocky, covered with scales, with tarsi of a diametre that often exceeds 8 cm. They are bare of greyish colour and are almost completely hidden by the bristly feathers hanging from the belly as this bird habitually maintains a crouched position as if it was always bent and lowered to better penetrate into the dense vegetation.

The foot is enormous and has only three toes, as customary for the membres of this family, massive and strongly clawed. That on the inner side is equipped with a claw longer than the toe itself that may exceed the 10 cm and is even considered a deadly weapon during the defensive attacks. 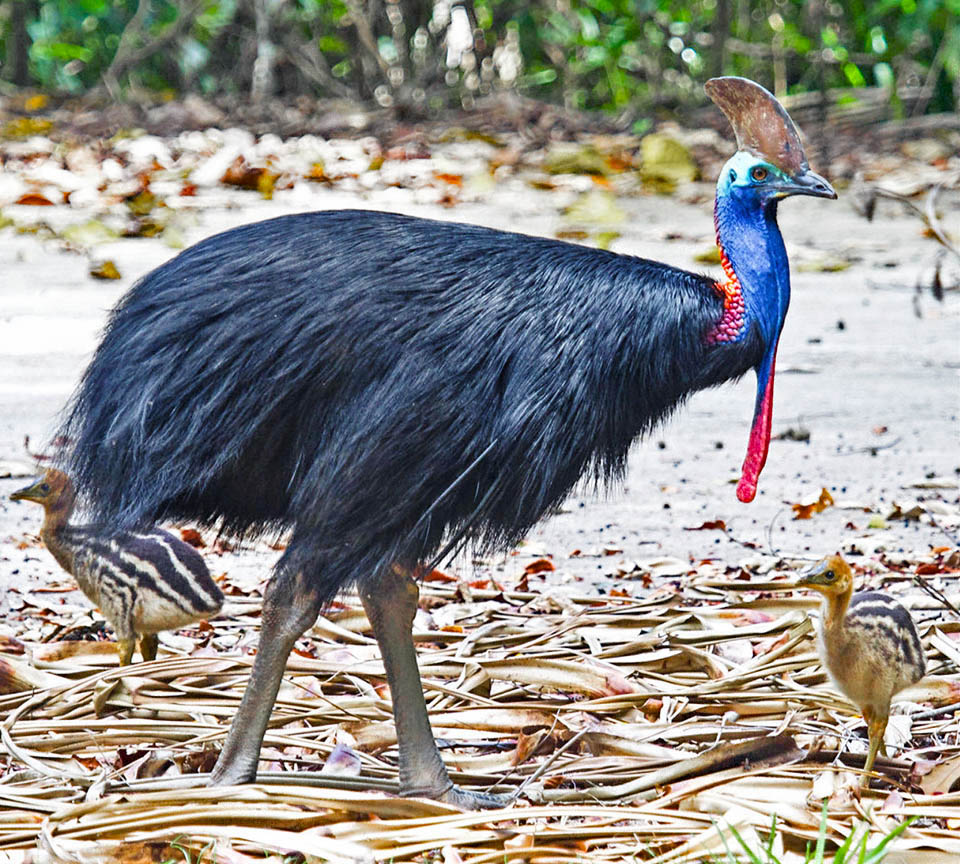 It’s always the male caring the brood for about 9 months, even if in the meantime the chicks have now become independent © Joe McKenna

When we were talking about the danger of its attacks, we referred to this lethal weapon that is habitually used with violent kicks and causing a real ripping of the body of any aggressor. A fact and a weapon that perfectly recalls the legs and the use the Tyrannosaurus or the Velociraptor made at the time of the dinosaurs. Indeed, controlling the relevant legs, it is quite easy to note their resemblance!

The Australian cassowary has a very fast and furious way of running that may reach the 50 km/h, even when it runs through the dense undergrowth, using the crest like a battering ram like a bull, staving branches and twigs and any other obstacle. 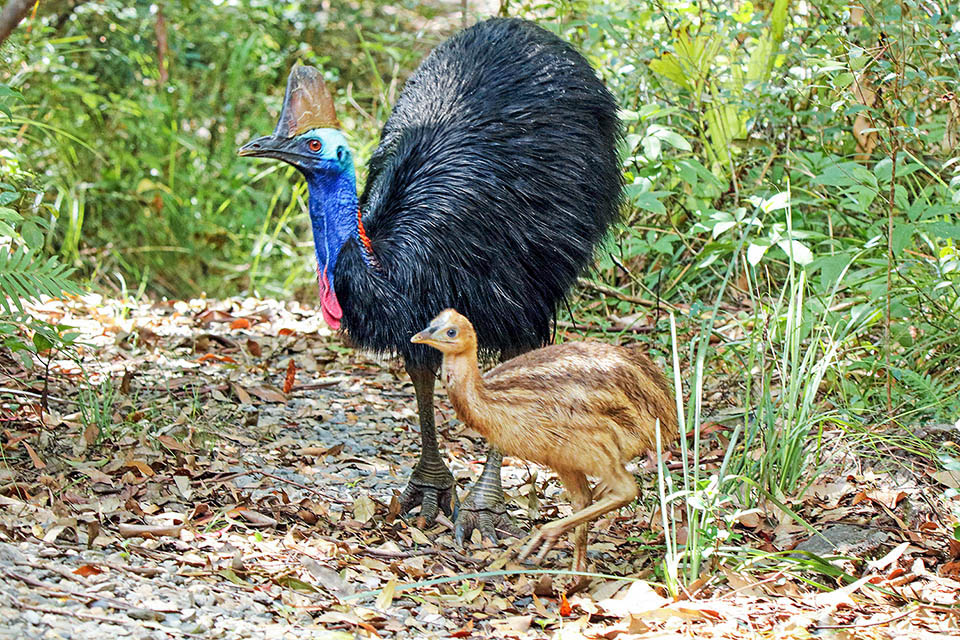 It’s a real fury when attacking and a real danger for those who see it appearing suddenly in front of them.

The liveries of the adults are similar even if the female displays brighter colours and larger helmet size, but often it is the age that favours these characteristics regardless the sex.

Conversely, the juveniles have a completely brown livery with pale longitudinal stripes all over the body that they gradually lose over the years. 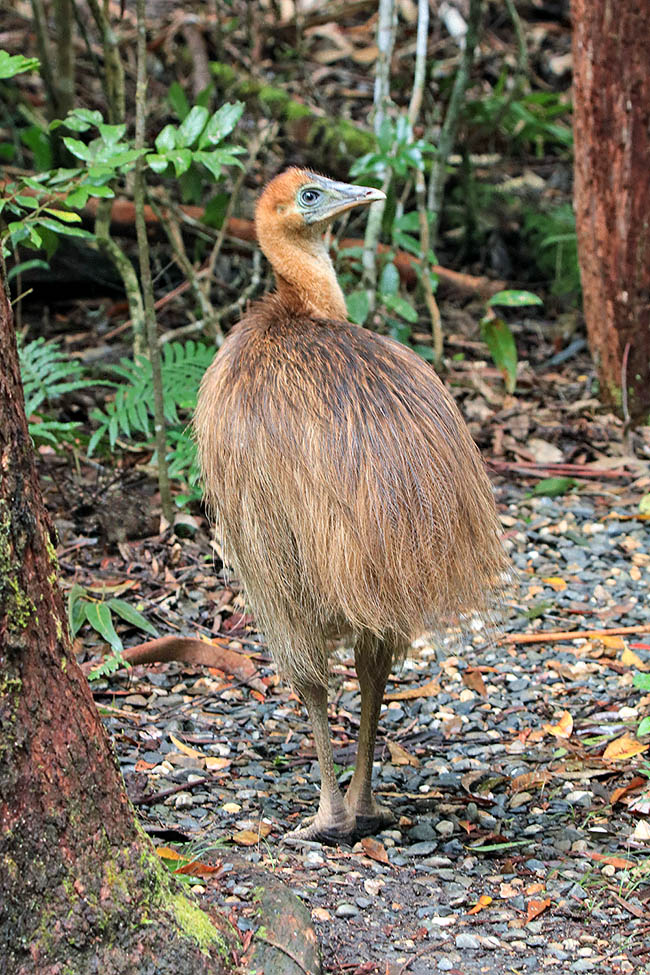 Therefore, the Australian cassowary is a polyandric bird and in each season the female habitually mates with a various number of males.

So, during the reproductive time we can observe for short periods more males courting one female and often witness brief conflicts between them, even if it is easier to hear their hissed and the dark guttural sounds emitted during these courtings, rather than succeed to observe them directly.

The female builds up several nests digging a light depression under a bush or at the foot of a large trunk, covering them with grass and filling them up with dry foliage, where it lays, in each one, three to five bluish coloured eggs very rugose and wrinkled.

It’s the male who cares for the hatching and the growth of the little ones as the female, once completed the deposition, is completely disinterested in the brood and retires to live isolated.

Hatching lasts about 50 days during which the male hardly leaves the nest, losing up to 30% of its weight.

Upon hatching the newborns are nidifugous and gather around the father who will care for them during about 9 months even if in the meantime they will have become independent.

Their life is quite long as it may last 50 years.

The Australian cassowaries are amply frugivorous and eat ripe fruits fallen on the ground, seeds, grasses and flowers but also insects and small animals. They say that it is also a good fisher, favoured by its boldness towards the water and the habit of frequenting beaches where, most probably, it collects the fishes stranded by the ocean waves.

As aforementioned, Papuan natives regularly consume its flesh even if the same is considered as very hard even if cooked for a long time.

In Australia, there is an imaginative recipe concerning the preparation of this flesh. “It is sufficient to cook it in a pot together with a big stone. When the stone is cooked, the flesh is ready to be eaten!”