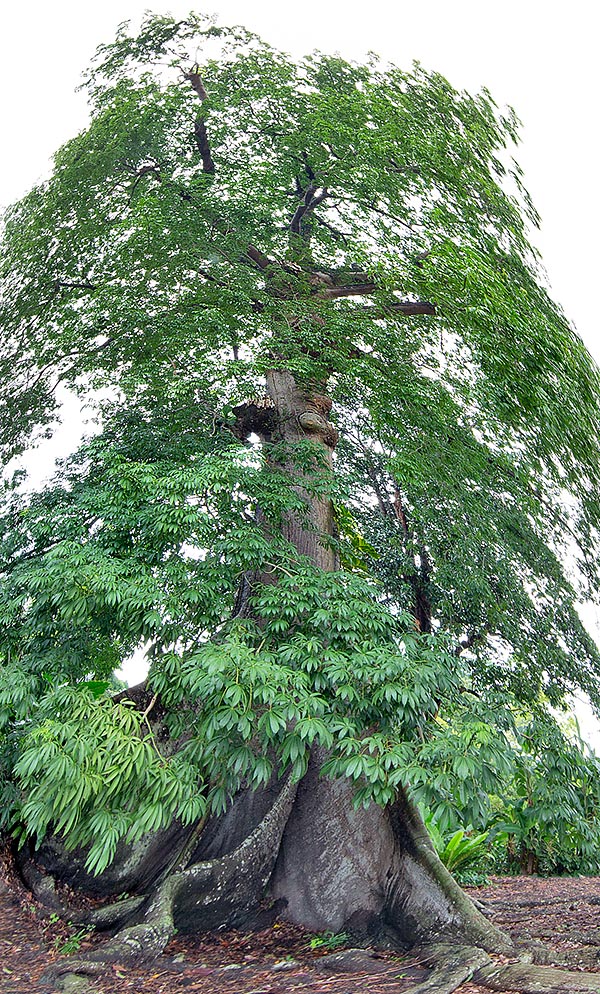 Frequent in the tropics, Ceiba pentandra is a gigantic tree, with caducous leaves reaching in the wild 50 m of height with 2 m broad trunks and typical roots, called tabulars, even 8 m tall to support the weight © Giuseppe Mazza

The name of the genus comes from the name given by the Caribbean natives which used its trunk for building canoes; the name of the species is the combination of the Greek words “pénte” = five, and “anér, andros” = male, with reference to the flowers with five free stamina.

Deciduous tree, with cylindrical 30 m and more tall trunk, up to 40-50 m in the old specimens in the wild, with a diameter up to 2 m and almost horizontal branches placed in verticils (three or more leaves or branches for each node) by three, characterized by the presence, at the base, of tabular roots (flat roots similar to buttresses, which help in supporting the big trees), tall up to 8 m. The bark is greyish-green or grey, strewn, in the young plants, by conical, 10-15 mm long thorns.
The leaves are palmate-compound with 5-11 elliptic leaflets with sharp apex and entire or indented margins, long up to 16 cm and 4 cm broad.

The hermaphrodite flowers, which usually appear after the fall of the leaves, are thickly grouped in axillar racemes on the terminal part of the branches and have a diameter of about 6 cm, with five white, cream-yellow or pink, petals, and five, 3-5 cm long stamina uniting in a column close to the base; they emit a rather unpleasant, intense, smell and open at the same time by dusk and then fall by the following afternoon, the pollinators are mainly bats. 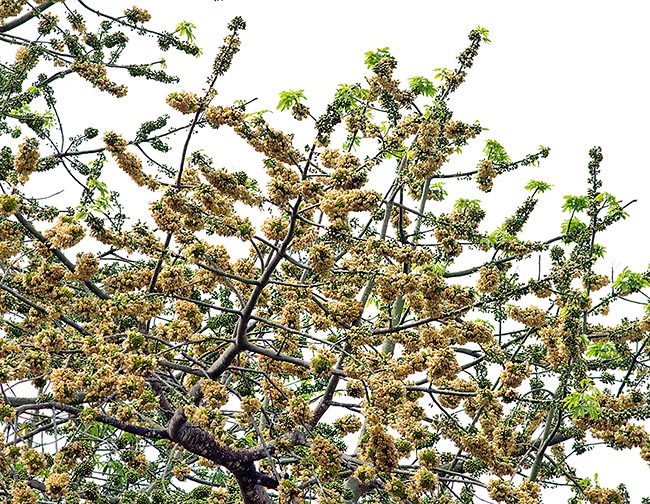 Hermaphroditic flowers usually appear after the palmate-compound leaves fall with 5-11 elliptic leaflets with pointed apex and entire or indented margins, up to 16 cm long and 4 cm broad © Giuseppe Mazza

The fruits are hanging capsules, dehiscent (fruits opening spontaneously when ripe along the lines of minor resistance, freeing the seeds), oblong, 20-30 cm long and with a diameter of about 8 cm, containing several ovoid dark brown seeds of 4-6 mm of diameter, wrapped by a mass of white or yellowish silky fibres, hollow, with the diameter of 30-36 µm (millionth of metre). It usually reproduces by seed, in sandy substrata, at a temperature from 24 to 28°C, germinating in 1 to 4 months, the germination times reduce drastically (about 5 days) if there is a pre-treatment consisting in a slight scarification followed by a 24 hours immersion in water; the first fructification will take place between the fourth and the sixth year of age.

It can reproduce by cutting too.

Plant with cultivation restricted to the tropical and subtropical zones with marked seasonal climates, as it needs a very rainy regimen during the growing period, and a rather dry one during blossoming and fructification; in order to get a fast growth, it is to be placed in full sun and in deep and draining soils.

For the fibres harvesting, the fruits are to be picked up before they open, then are to be dried up in the sun and then opened, the separation from the seed being done by special machines.

The fibres are formed for more than the 60% by cellulose, are hydro-repellent and can float due to the presence of air in their interior (for these reasons, they are utilized also for stuffing life-jackets and life-belts), and contain a toxic substance which hinders the attack of parasites; they can be processed together with other fibres and can be coloured.

Before the advent of the synthetic fibres, they have been widely utilized as stuffing, then their utilization for this purpose has drastically reduced; even if there is a renewed interest for them during the recent years; they are, moreover, an excellent thermal and acoustic insulator. The seeds contain the 20-25%, and the shell even the 40%, of an oil utilized for making soaps, for lubricating and for producing medicines. 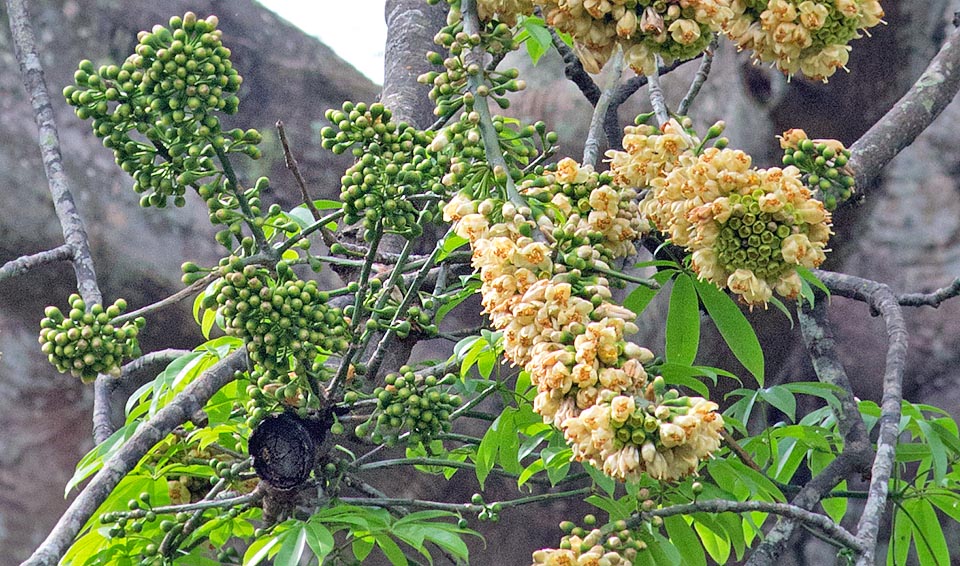 Buds, flowers and new growing leaves. From the seeds they get an oil used to make soaps, medicines and lubricants; roasted they give an edible flour. Various parts of the plant, particularly bark and roots, are used by the traditional medicine. Fruits fibres are used as stuffing for coats and life-belts © Giuseppe Mazza

The wood, of cream-white colour and of poor quality, is mainly utilized for fabricating the plywood, but also in carpentry, for making boxes, tools, music instruments, etc., and for producing paper.

In some zones, the leaves, flowers and unripe fruits are eaten as cooked and the seeds are roasted, from the seeds they get also flours utilized for soups. In case of necessity, the superficial roots can be source of water.

The fibres are irritating for the eyes and the mucosa of mouth and nose, this is to be kept in mind during their processing.

All the parts of the plant, in particular root and bark, are variously and amply utilized in the traditional medicine.

Finally, for many local populations, the tree is sacred and has held a major importance in the pre-Columbian mythology.