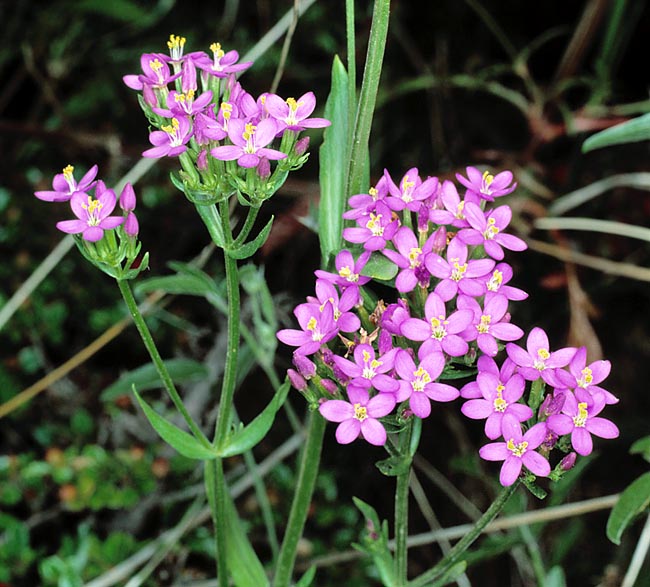 The genus Centaurium includes some fifty species, among which the Common centaury (Centaurium erythraea Rafn,1800) present in a vast range (Paleo-temperate distribution) which includes Europe, Asia (in China and northern India up to Himalaya) and North Africa.

The name of the genus comes from the mythological centaur Chiron, Achilles’ preceptor, famous in the art of treating many ailments; the species epithet comes from the Greek “erythros” = red, due to the red colour of its flowers.

It is a herbaceous glabrous plant with biennial or annual cycle, 10-30 (50) cm tall, with erect stem, slender, angular due to protruding sub-winged nervations, simple below, with ascending branches on top, furnished with tapering root. Basal leaves in persistent rosette, obovate-obtuse attenuated at the base, opposite cauline, sessile, ovate or lanceolate, acute, decreasing, entire.

The flowers, up to 1 cm broad with pink petals, are more or less purplish, ovate, with obtuse apex, star-expanded and merged at the base in a tube and united in terminal foliar corymbs. Calyx of 4-5 mm. The flowering goes on from May to September. The fruits are 2-10 mm cylindrical capsules opening when ripe for two valves freeing very tiny brownish seeds with finely netted surface. The whole plant has a decidedly bitter taste.

Of this small but elegant and polymorphous plant several subspecies and numerous varieties have been described. After Prof. Pignatti (Flora d’Italia:1982) the tetraploid subspecies have been able to expand amply in all temperate and temperate-cold Eurasia and, more recently, they have been introduced by the man also in North America.

The common centaury grows in even much differing habitats such as muds and wet sands (also brackish), shady paths, grassy places, stony pastures, dry meadows, moors, thickets and garrigues, from the plain up to 1500 metres of altitude.

It is an herb known and utilized since the old times, appreciated by Greeks and by the Gauls, and still used in the popular traditions of many locations. In Italian, it is also known as “biondella” (=little blonde) due to the property of its decoction to bleach hairs and freckles. 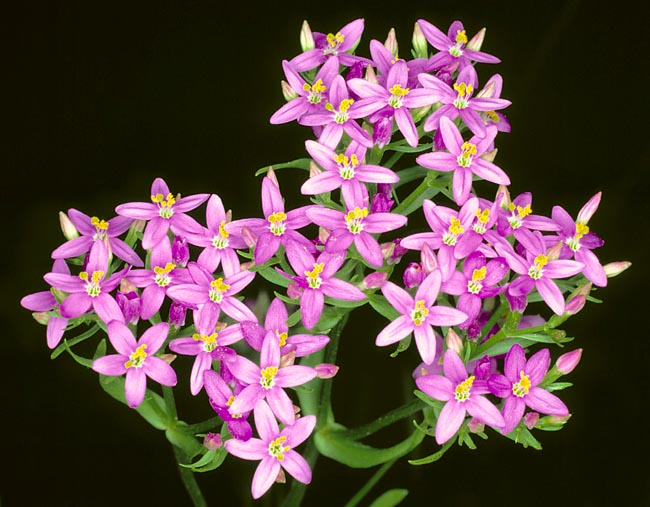 A legend says that a garland composed by these flowered plants, carried on the head by the night of Saint Walpurga, between April 30th and May 1st, protects against the witches evil influence. In various European countries (Bulgaria, Hungary, countries of the former Yugoslavia) and in Morocco, this species is subject of cultivation for the officinal uses as well as for the liquor industry. Harvested in the time of the full flowering (balsamic time in July), it contains bitter glycosides (eritaurin, eritrocentaurin, eritramin), one lactone (eritauron), flavonoids, triterpenes, traces of pyridinic and acidinic alkaloids, cerotic acid, phytosterin, inulin, stearic and palmitic acid, one ethereal oil, waxes, gums, tannins, sugars, etc.

They have repeatedly proven its well known bitter-tonic, appetizing, eupeptic, stimulant of gastric secretion, activator of the digestive processes, antipyretic properties which are employed in the inappetence and in the difficult digestions especially under form of infusion and of tincture. For external use, it is effective as detergent and as cicatrizant. It is inadvisable for the subjects suffering from gastric hyperacidity (hyperchlorhydria), gastritis and ulcer. In the popular medicine it was for long time used like the quinine for fighting malaria fevers. The infusion of centaury is prepared with two grams of dried plant in 150 ml of boiling water for 15 minutes, to drink lukewarm ½ hour before the meals.

A spoonful of flower tops in a pot of water: when it begins boiling, remove from the heat and let infuse for ten-twelve minutes. To drink half a pot half an hour before the two main meals, sweetening to taste.

A handful of flower tops in one litre of sweet white liqueur wine (for instance, Passito di Pantelleria): to let macerate for one week and shake from time to time; to filter and to consume a shot before the meals as appetizer-tonic or after the meals as digestive.