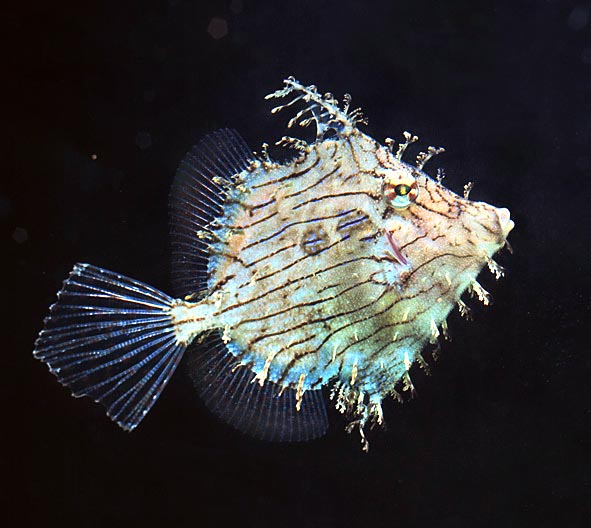 The Prickly leatherjacket (Chaetodermis penicilligerus Cuvier, 1816) belongs to the class of the Actinopterygii, the ray-finned fishes, to the order of the Tetraodontiformes and to the fanciful family of Monacanthidae, the so-called “filefishes” due to the roughness of the skin, covered, like the Balistidae, by small bony plates, which here are minute and spaced with one or more spinules.

It is present in the tropical waters of the eastern Indian Ocean and of the western Pacific Ocean. We find it, indicatively, in Cambodia, Thailand, Malaysia, Australia, Indonesia, New Guinea, Philippines and Taiwan and along the southern coasts of Japan.

It leaves among the corals and the weeds close to the sandy bottoms.

It can exceed the 30 cm of length, but usually it has more modest measures, around the 25 cm. The body, of trapezoid shape, is flat and covered by more or less ramified excrescences which play an important camouflaging role along with the livery. 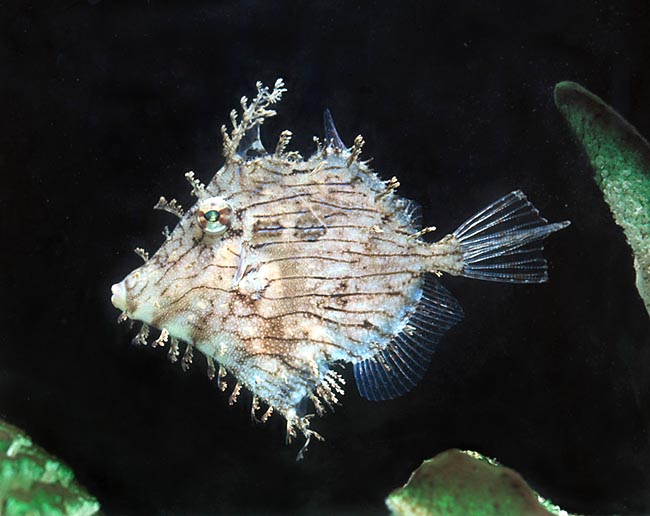 Also this one, at times truncated in the big specimens, has a rhomboidal shape.

All fins are more or less transparent in order to confound the fish with the habitat and apart the excrescences also the livery is a masterpiece of mimetism. On the background, golden brown with small brown, green or bluish spots runs a dozen of thin black horizontal lines, irregular and mixed here and there with bright small points. This is ideal for camouflaging with the sand, the vegetation and the corals.

The Chaetodermis penicilligerus nourishes greedily of all the small animals it finds in the crevices of the corals, where it can easily enter thanks to its flat body and the pointed snout. Small crustaceans, annelids, molluscs, polyps, eggs and sea weeds: practically all what it can catch with its small mouth.

During the reproductive period the male surveys the eggs the female has stuck on the bottom in a sheltered location.

When swimming in small schools it often ends up in the trawls. The flesh is considered good by the locals and the skin once was used as sandpaper for smoothing the objects. It s also an excellent aquarium fish, much sought for due to its unusual look, easy to nourish, robust and friendly with the other fellow guests of the pool.

The populations can double in 1,4-4,4 years and the vulnerability index is presently modest, with a value of 34 on a scale of 100.