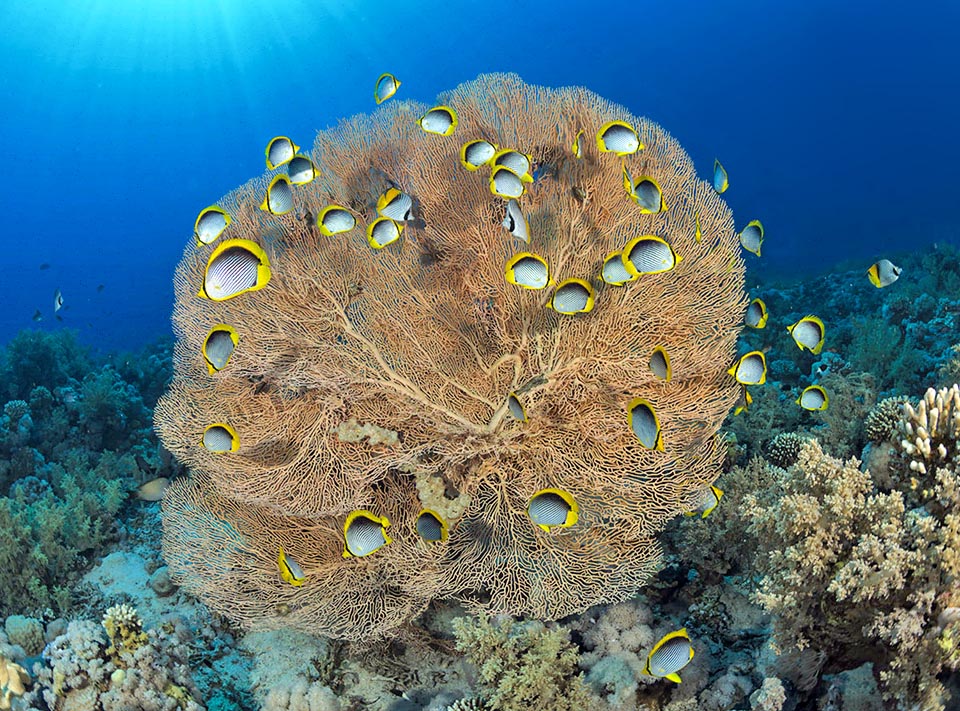 The very attractive Blackback butterfly-fish (Chaetodon melannotus Bloch & Schneider, 1801), belongs to the class of the Actinopterygii, the ray-finned fishes, to the order of Perciformes and to the family of the Chaetodontidae.

The name of the species melannotus comes from the Greek “μέλας” (melas) = black and “νότον” (noton) = back, in other words, it is a fish with black back. 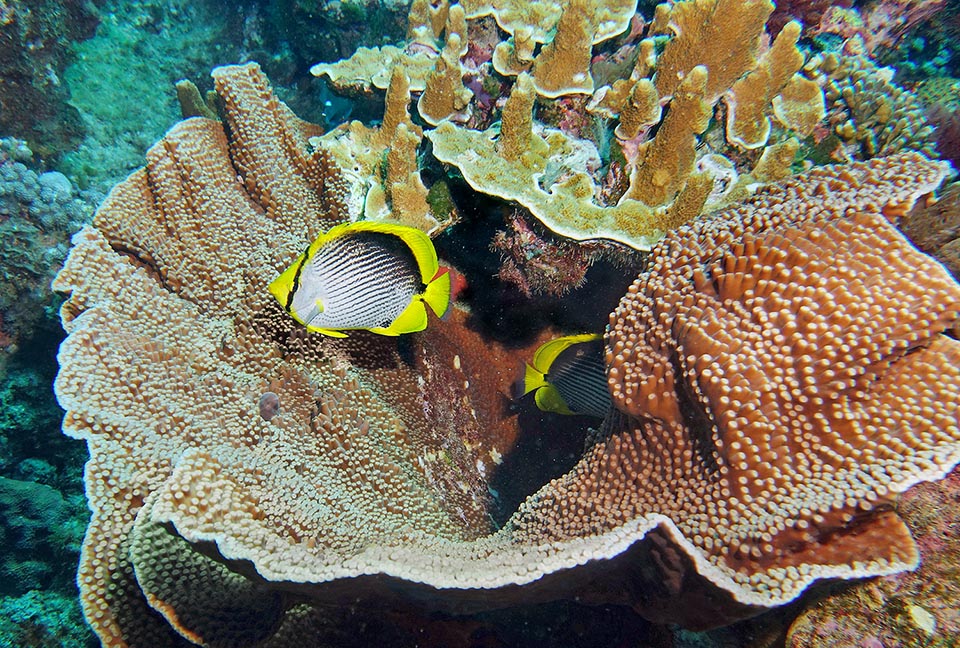 It practically lives in all Indo-Pacific tropical waters, from African coasts up to the Tuamotu Archipelago. Southwards, it reaches Lord Howe Islands and northwards, Japan © John Turnbull

The blackback butterflyfish has a very large range.

It is present in the tropical waters of the Indian Ocean, from South Africa and Madagascar up to the Red Sea and the Gulf of Aden, India with Sri Lanka, the Maldives, Indonesia and Australia, and then in the Pacific, northwards up to Japan and eastwards up to Fiji, Tonga, Samoa islands and the Tuamotu Archipelago. 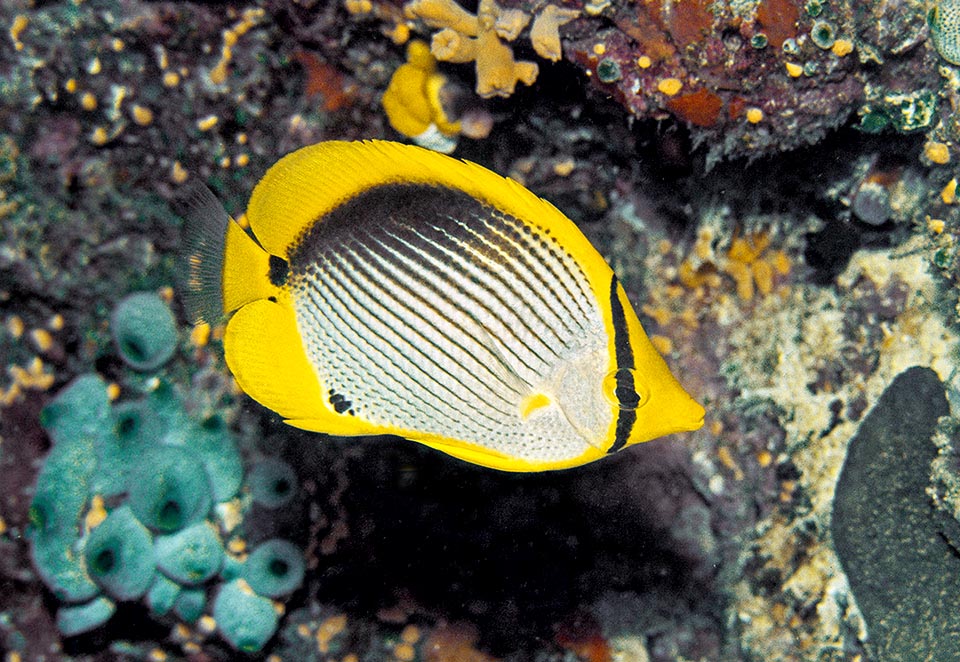 It owes the scientific name of the species to the vast unusual black zone present in the second half of the back that continues, with a showy spot, on the caudal peduncle © Giuseppe Mazza

Closely associated with reef, it swims amongst the octocorals and the scleractinians of which it nourishes, starting from the 4 m of depth, without exceeding the 20 m.

The body is flat, more or less roundish, with elongated snout. 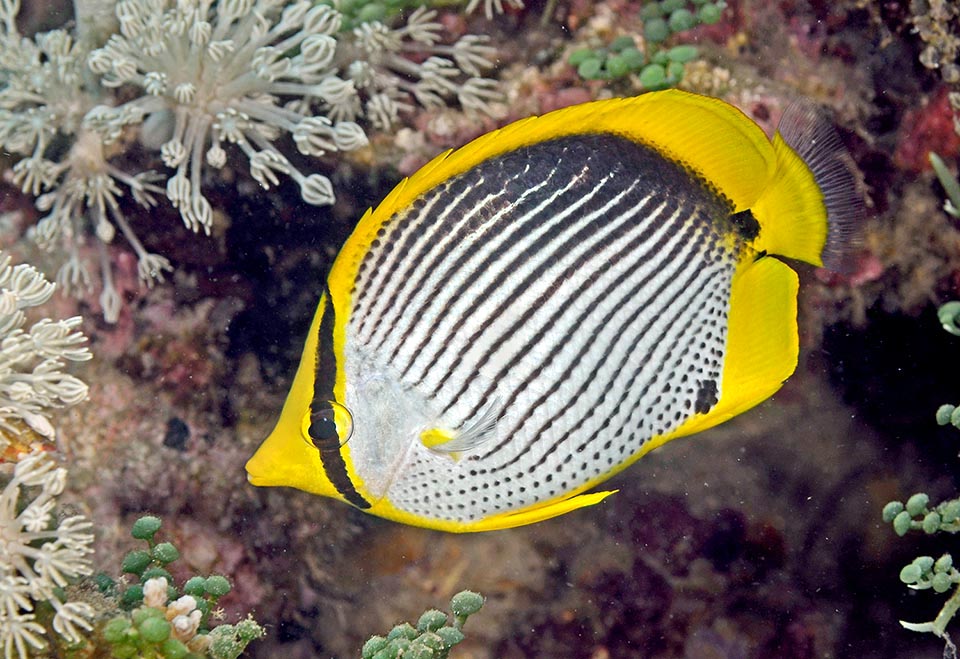 As often happens, the eye is masked by a black band, and the characteristic oblique hatching of body breaks with rows of aligned spots on ventral side © Benoit Lallement

The livery is basically white, with dark diagonal bands gradually tapering while approaching the head until they become dots lined up in the upper and inferior parts of the body. The whole is surrounded by the yellow of the head and of the fins. 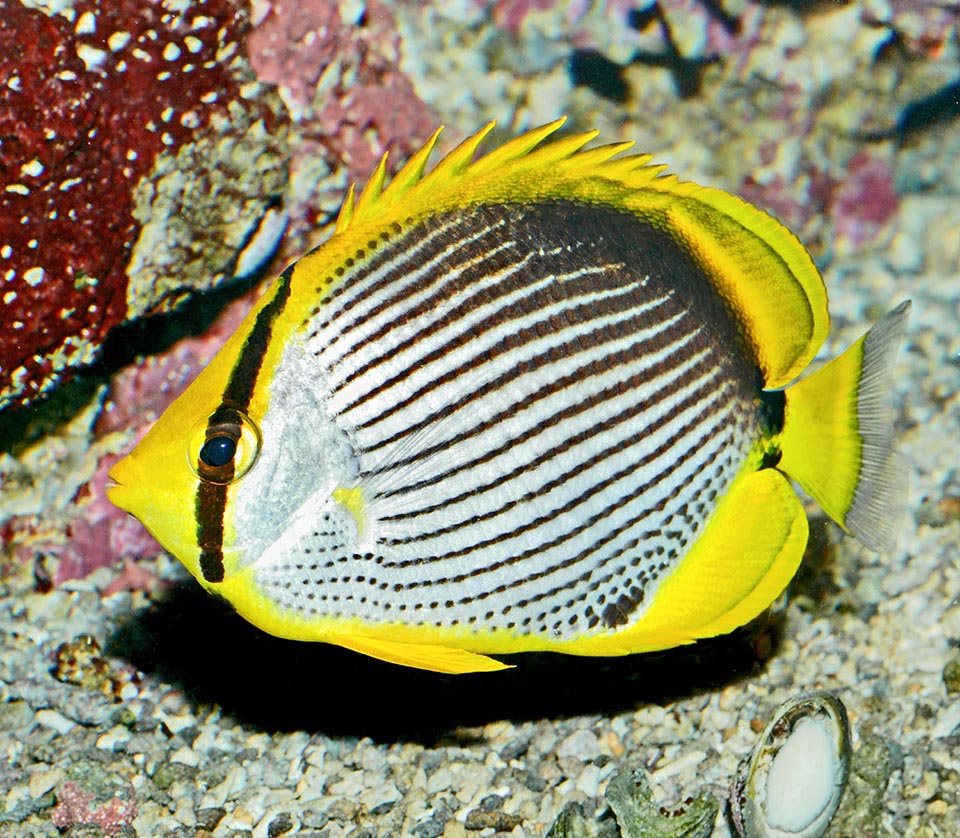 If restless or in case of danger, it raises the dorsal spine to show its only weak defense, the spiny rays, and to appear in the same time bigger to the eye of the predators © Giuseppe Mazza

A black band crosses, as often is the case, vertically the eye and a black spot is evident on the caudal peduncle.

But, above all, the second half of the back is black, as states the Latin name of the species.

When it is scared, or during the night, also the clear dorsal part gets black with two white spots, probably for disorienting the predators or for getting recognized by the conspecifics in the darkness. 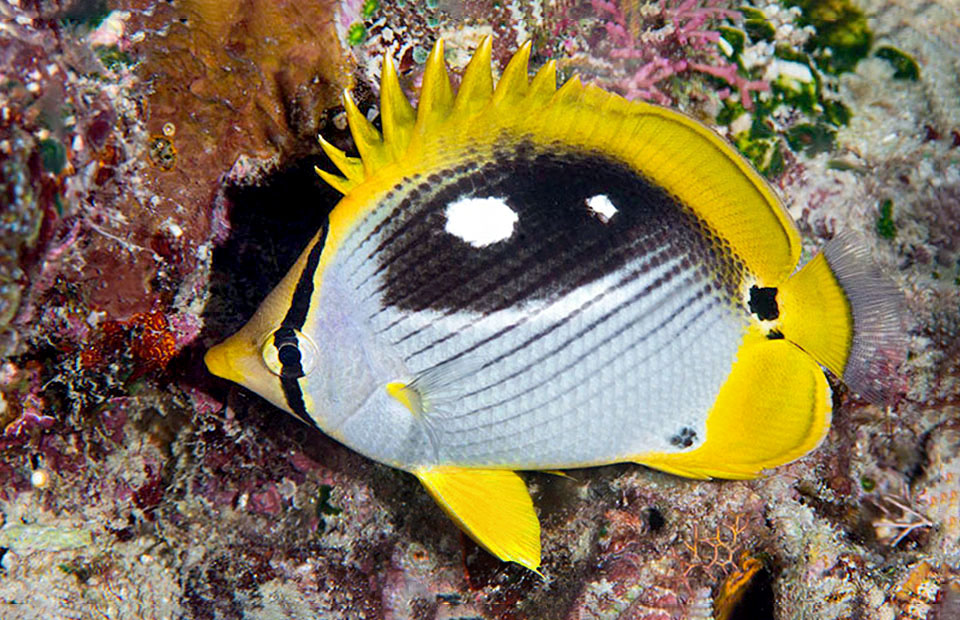 It changes livery by night. The dorsal black zone melts darkening with two characteristic white spots similar to eyes, maybe for disorienting in the dark the predators © François Libert

The blackback butterflyfish usually lives solitary or paired, hidden among the madreporic ramifications of the genus Montipora, nourishing exclusively of polyps of hard or soft corals, but they have observed also some groupings which lead to think about some mass depositions.

The eggs are pelagic and are, like the larvae, entrusted to the currents. 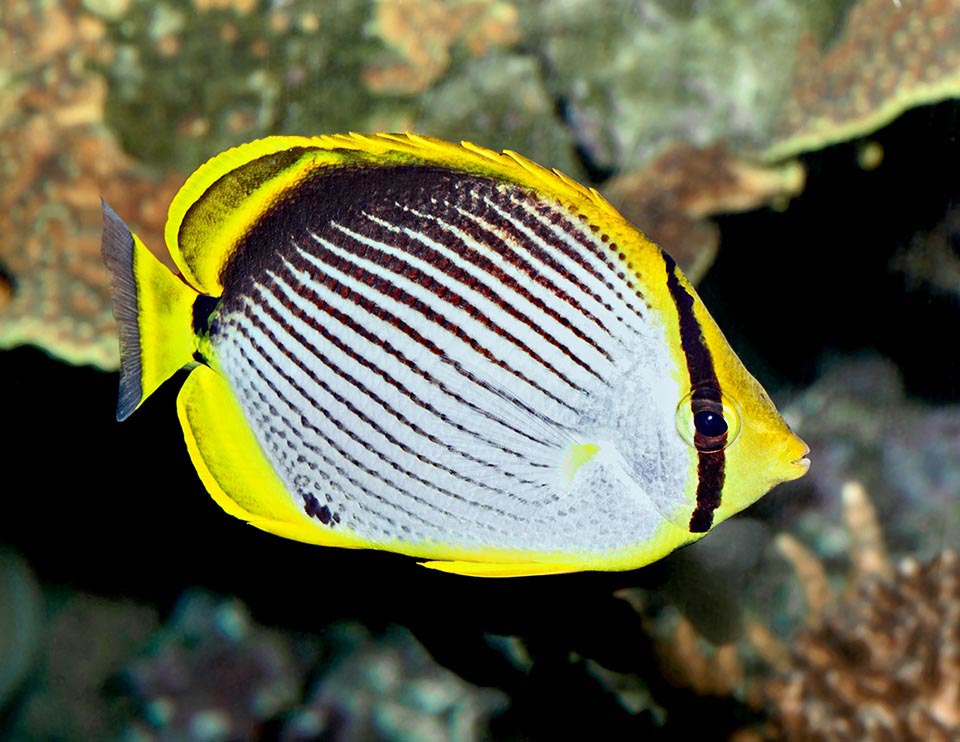 Usually lives solitary or in pairs, but have been noted also showy gatherings, like in the photo above, that lead to think to a collective pelagic reproduction © Giuseppe Mazza

Even if it is not fished for alimentary purposes, it is an endangered species.

The global warming, by destroying the reef, has, for instance, reduced of the 90% the Chaetodon melannotus present in the Australian Great Barrier Reef.

Elsewhere, the populations of the Blackback butterfly-fish are still relatively rich, but nobody has ever evaluated the real impact of the aquaria trade. 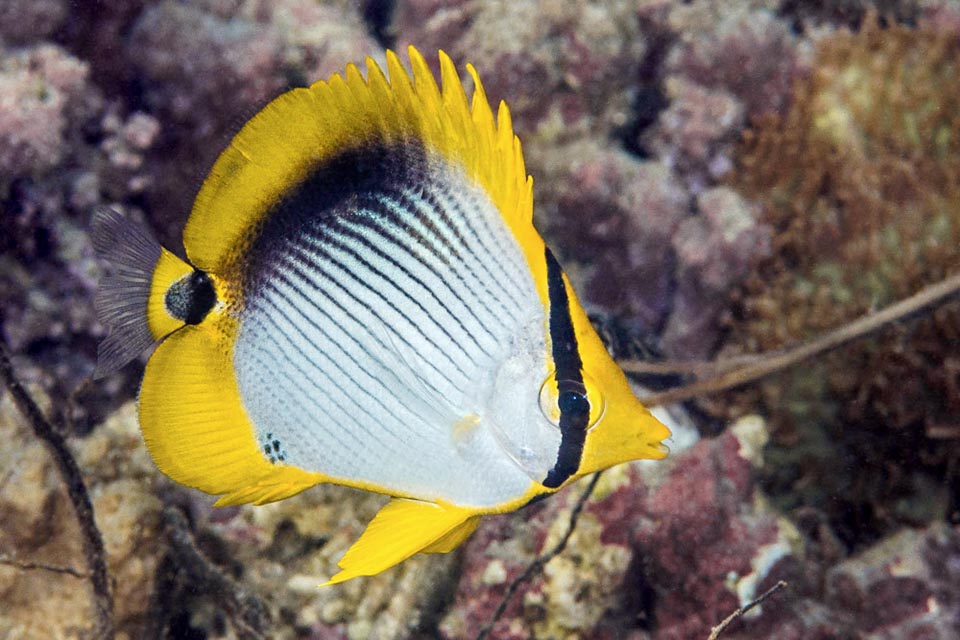 A juvenile. Apart from the roundish look, it’s like the adults. In various sites, like the Great Barrier Reef, due to the climate changes, the species is in sharp decline © François Libert

Although the blackback butterflyfish may live 20 years, it is in fact a species which needs, all going well, 4,5-14 years for doubling its members. No wonder then if the fishing vulnerability index marks 47 on a scale of 100.