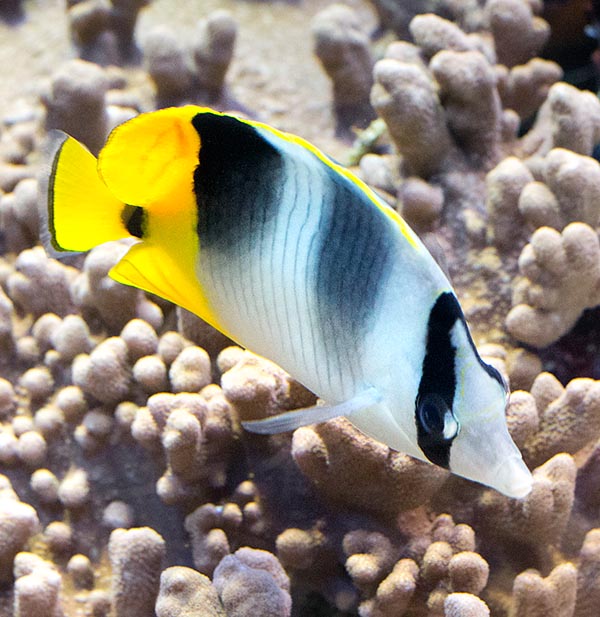 The unusual and mimetic Pacific double-saddle butterflyfish (Chaetodon ulietensis Cuvier, 1831) belongs to the class of the Actinopterygii, the ray-finned fishes, to the order of Perciformes and to the family of Chaetodontidae.

The name of the species ulietensis = of Uliétéa in Latin, refers to the island of Uliétéa, today known also as Raiatea Island, belonging to the Society Islands, Leeward Islands, in French Polynesia.

It is a species at home in the Pacific Ocean and in the neighbouring zones of the Indian Ocean.

It lives in the madrepores formations up to 30 m of depth, usually in the calm lagoon side and not on the side facing the sea. The juveniles are frequent also in the brackish waters of the estuaries and the harbours.

Slightly smaller, it does not exceed the 15 cm, against the other’s 20 cm, and like the saddled butterflyfish, it has a livery with vertical stripes on pale background, a black spot on the caudal peduncle, the black band on the eye and, especially, two dark saddles on the back. But here the dorsal spots do not have the shape of a sickle and are much more shaded. The first, towards the head, appears decidedly faded, and the second, black upwards, turns to the grey towards the belly. 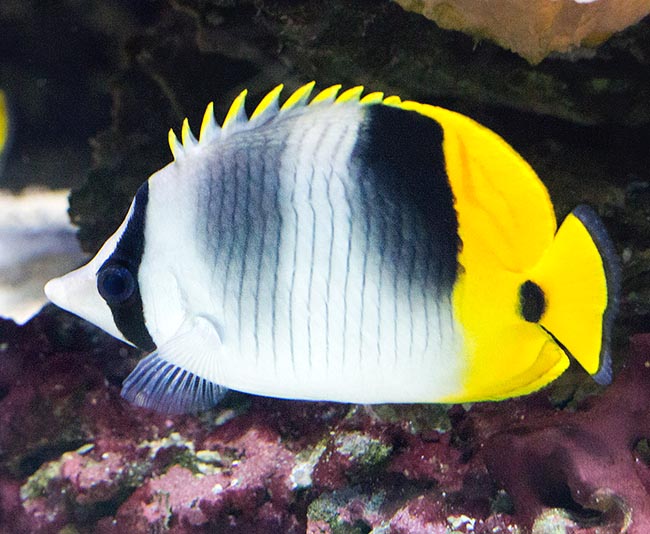 The body is flat like all butterflyfishes, more or less oval with elongated snout.

Due to the vertical striped drawing and the colour, it recalls also the Chaetodon lineolatus which, with its 30 cm of length, is the biggest member of the genus Chaetodon.

The Pacific double-saddle butterflyfish can live solitary or in small schools.

During the reproductive period, more or less stable pairs take form and after the fecundation the eggs are entrusted to the currents.

It nourishes of various benthic invertebrates and of seaweeds. The populations can double in less than 15 months, and seen that it is omnivorous, in spite of the climate changes and the vast aquaria market, the vulnerability index of the species is very low: only 13 on 100.