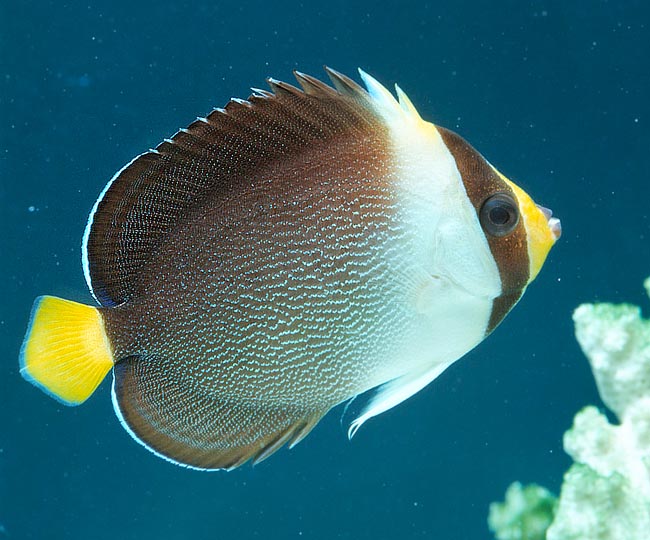 Chaetodontoplus mesoleucus seems a butterflyfish, but belongs to the angelfishes © Giuseppe Mazza

The very unusual Vermiculated angelfish (Chaetodontoplus mesoleucus Bloch, 1787) belongs to the class of the Actinopterygii, the ray-finned fishes, to the order of Perciformes and to the family of Pomacanthidae.

The name of the genus comes from the Greek “chaite” = hair and “odous” = tooth, the well known roots of the genus Chaetodon, the fishes with the “bristle-shaped teeth”, with the addition of “oplon” = weapon, with allusion to the spine on the pre-operculum. It is, in short, an “armed “ Chaetodon, but not a butterflyfish, seen that it belongs to the family of the Pomacanthids, commonly called angelfishes.

The name of the species “mesoleucos” comes from “mesos” = middle and “leykos” = white, with reference to the big central spot on the body.

It is mainly present in the tropical waters of the Pacific Ocean, but also on the eastern coasts of the Indian Ocean.

As a matter of fact, we find it, just to give an idea, in Sri Lanka, the Andaman Islands, Thailand, Malaysia, Singapore, Australia, Indonesia, New Guinea, Philippines, Taiwan, Vietnam, and China up to southern Japan. Eastwards, it stops at the Solomon Islands.

It lives in the madreporic formations up to 20 m of depth. 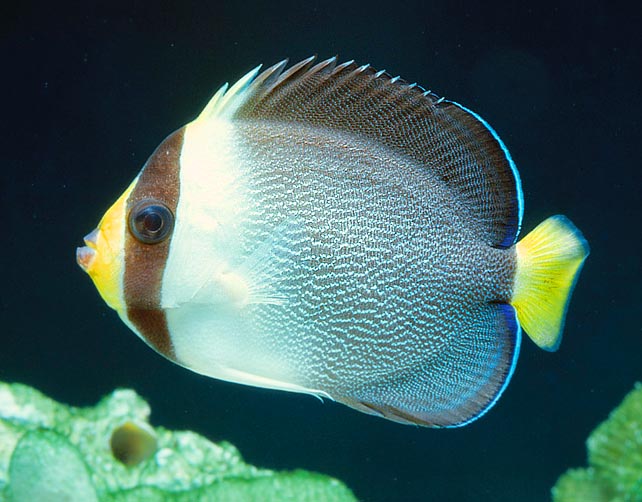 It eats sponges, ascidians and filamentous seaweeds. The populations are stable © Giuseppe Mazza

The vermiculated angelfish does not exceed the 18 cm. its body is flat, more or less oval, and, at first sight, it seems a butterflyfish, as anyway states the root of the genus, but the spine at the base of the operculum, visible also in these pictures, makes the difference. Furthermore, the snout is quite different.

The extremity of the head is yellow like the tail, just to confuse the ideas to the aggressors, and the eye, as often happens, is masked by a vertical dark band. Then a white zone follows, which is the one who has given the name to the species, and a vast dark area arabesqued by white small traits.

In some individuals, the tail is grey, and some hypothesize the presence of another species.

The vermiculated angelfish lives solitary, in pair or in small schools nourishing of sponges, ascidians and filamentous seaweeds. After the fecundation, the eggs are entrusted to the currents.

Even if fished for the aquaria market, its populations are presently stable thanks to the varied diet and to the fact that they may double in less than 15 months. The vulnerability index is therefore rather low: 25 per 100.