The species is native to Mexico (Hidalgo, Querétaro, San Luis Potosí and Veracruz) where it grows in the humid forests, between 800 and 1500 m of altitude, on mainly calcareous soils.

The name of the genus is the combination of the Greek adverb “χαμαί” (chamai) = on the ground, on the soil, and of the substantive “δωρέα” (doréa) = gift, the German botanist Carl Ludwig Willdenow (1765-1812), who established the genus in 1806, did not specify the exact meaning of the name. The name of the species is the combination of the Greek adjective “μικρός” (micros) = small, and “σπάδιξ” (spadix) = branch of palm with fruits, even if this epithet does not correspond to reality.

The Chamaedorea microspadix Burret (1933) is a dioecious species forming dense tufts with erect or slightly slanted stems, 1,5-3 m long and of 1 cm of diameter, of green colour and on which are visible the whitish rings of the foliar scars spaced of 5-15 cm. The leaves, on a 15-25 cm long petiole, are pinnate, up to about 60 cm long, with 9-11 alternate leaflets and regularly arranged on both sides of the rachis, sigmoid or falcate with pointed apex, 16-26 cm long and 3-4,5 cm broad, but the terminbal two that are shorter and broader, of intense green colour and velvety above, glaucous green below. The tubular leaf base, obliquely open at the apex, of pale green colour, wraps wholly the stem for a length of 20-30 cm. 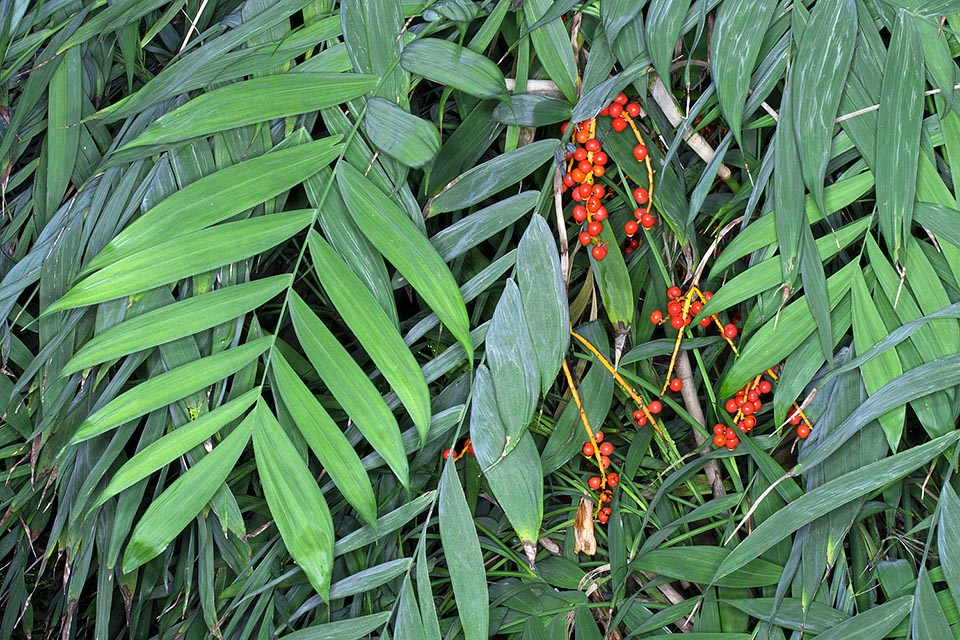 Much cultivated due to the velvety leaves, showy infructescences and resistance to cold, the Chamaedorea microspadix is native to Mexico where can be 3 m tall © Giuseppe Mazza

Inflorescences, on a 10-18 cm long peduncle, under the leaves (infrafoliar), ramified, erect or hanging, the male ones with cream coloured flowers, of about 5 mm of diameter, united in groups of 2-8, the female ones with solitary flowers, of the same size as the male, of greenish white colour and rachillaer initially green then orange when in fruit. Globose fruits, of about 1 cm of diameter, of initially green colour, then red-orange when ripe, containing one seed only.

It reproduces by seed in draining loam maintained humid at the temperature of 24-26 °C, with germination times of 1-2 months; it may be propagated by division.

Species standing among the most ornamental of the genus amply cultivated for the velvety leraves, the showy infructescences and the resistance to the low temperatures, perhaps only inferior to the Chamaedorea radicalis Mart., resisting without appreciable damage to temperatures up to -5 °C and up to about -7 °C with damages to the aerial part. It requires a just shady to shady position and draining soils maintained humid to grow at the best, but is able to stand short dry periods. Cultivable also in pot for the decoration of open spaces and luminous inner spaces, where the climate does not allow the permanence in open air during the winter months, with lowest temperatures over the +10 °C. The waterings must be abundant and regular in summer, but without stagnations, more spaced in winter, but without ever allowing the substratum to dry up completely, and the monthly fertilizations, in spring-summer, done with balanced products with microelements at half the dosage suggested on the package.