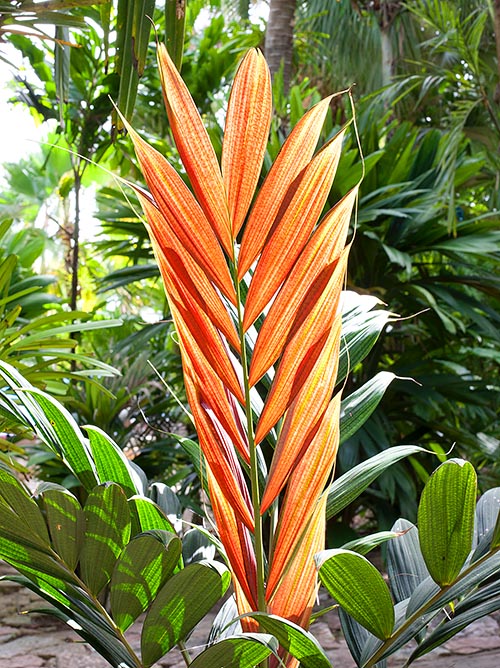 The young leaves of Chambeyronia macrocarpa are red-orange © Giuseppe Mazza

The species, rather variable, is native to New Caledonia, where it lives in the humid forests at low and medium altitude.

The genus was honoured by the botanist Eugène Veillard (1819-1896) to the French naval officer Charles Marie Chambeyron (1827-1891), leader of the expedition in New Caledonia.

The name of the species is the combination of the Greek terms “makrόs” = big and “karpόs” = fruit, with obvious reference.

The Chambeyronia macrocarpa (Brongn.) Vieill. ex Becc. (1920) is a monoecious species with single, erect, stem, tall up to about 16 m with a diameter of 16-20 cm, enlarged at the base, smooth, of glossy green colour, at times with yellow striations, in the youngest part, on which stand out the rings trace of the junction of the fallen leaves.

Regularly pinnate, 2-4 m long, leaves, curved, of intense glossy green colour, often of a showy red, orange or bronze colour, during the first days of the opening, with at the foliar base wrapping totally the stem for a height of 1,2 m, thus forming a sort of an elegant capital, of green colour, at times covered by tiny whitish scales.

The inflorescences generate under the leaves on a short peduncle, are ramified, erect (hanging when in fruit), up to about 1 m long, with flowers placed in the typical triad (a female flower between two male ones), but in the apical part where only male flowers are present. The inflorescence has the phenomenon of the proterandry, the male flowers ripe before the female ones; this avoids the self-fecundation, favouring the crossed one. 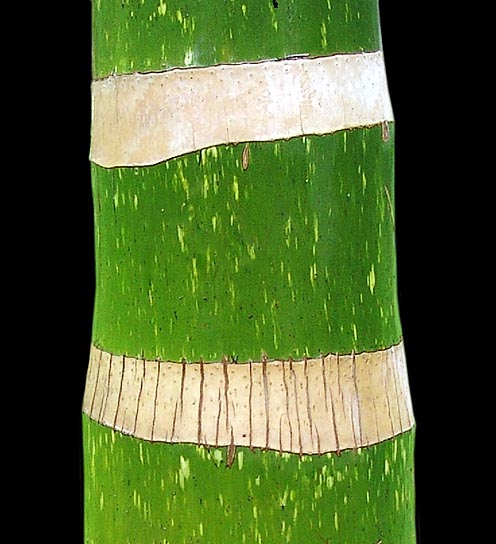 The adorned trunk, as watermelon, by dots in the green part and by foliar traces © Pietro Puccio

Species with a great ornamental effect, isolated or in groups, with a fairly slow growth, it can be cultivated in the zones with tropical, subtropical climate and also warm temperate, where it may resist to occasional, and very short lasting, drops of temperature up to about -4 °C, even if with damage to the foliage, but with a particularly slow growth.

During the first years, it is to be maintained in a shade position, and then it can be gradually exposed in full sun. It is not particular about the soil, provided it is well drained, but grows at the best in soils rich of organic substance constantly kept humid.

Young specimens can be utilized for indoors decorations in luminous position, but avoiding the direct sun.