The Broomtail wrasse (Cheilinus lunulatus Forsskål, 1775), belongs to the class of the Actinopterygii, the ray-finned fishes, to the order Perciformes and to the family of Labridae, rich of about 70 genera and 500 species.

The etymology of the genus comes from the Greek “cheilos” = lip, with reference to the big jaws.

The name of the species comes from the Latin “lunula”, the small crescent-shaped buckle decorating the footwear of the senators. Our fish, which has a very variable livery, has in fact always one close to the operculum.

It is a species localized in the Red Sea and adjacent zones of the Indian Ocean, from the Gulf of Aden and the coasts of Somalia up to the Gulf of Oman. Southward, it reaches the Seychelles.

It is a relatively rare fish with a density of population of 1-3 specimens per hectare.

It lives in shallow waters, but also at 30 m of depth on the outer side of the reefs. It is often going around on the sandy bottoms, at the limit of the madreporic formations, in the prairies of submerged grasslands looking for shells it crushes easily, like a nutcracker. 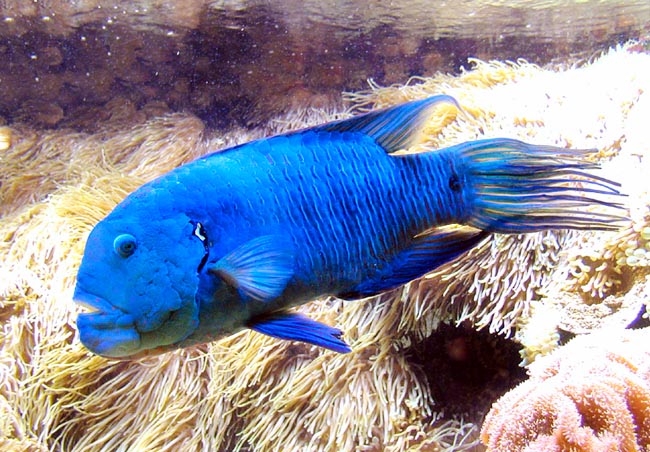 Reaches 50 cm. The livery is variable but always has a golden buckle drawing near the operculum © Mazza

High and flat, it reaches the 50 cm of length. It leaps immediately to the eye due to the characteristic vertical profile of the head and the unusual fringe of the caudal fin, evidenced in various languages as having a fan-shaped tail or broom-shaped.

Except the aforementioned golden buckle on black ground, the livery is really indescribable. The juveniles and the females, which have paler colours, show some dark brown vertical bands on a pale background and greenish head with red small dots, present also in the males which often show a pale band, often yellow like the pectoral fins, delimiting the second part of the body which is bluish. But there are also specimens where the blue colour extends practically all over the body, as the one shown, and almost always we note a black spot at the base of the caudal peduncle.

It nourishes of benthic animals, mainly molluscs, but also of crustaceans. It lives alone or in small groups of 4-8 individuals headed by a big male. As often is the case in the world of the wrasses, it is a protogynous, hermaphrodite species, with females that, while growing, can transform into males. The fecundated eggs are entrusted to the currents and the young have a life expectancy of almost 20 years.

Even if it is a species often present in the great public aquaria, it is not endangered by the aquaria market but rather by the fishing industry, because, seen the size and the excellent flesh, often ends up on the tables of the locals. The populations decimated by the events need 4,5-14 years for doubling their number and the species has therefore nowadays a relatively high vulnerability index, of 50 on a scale of 100.