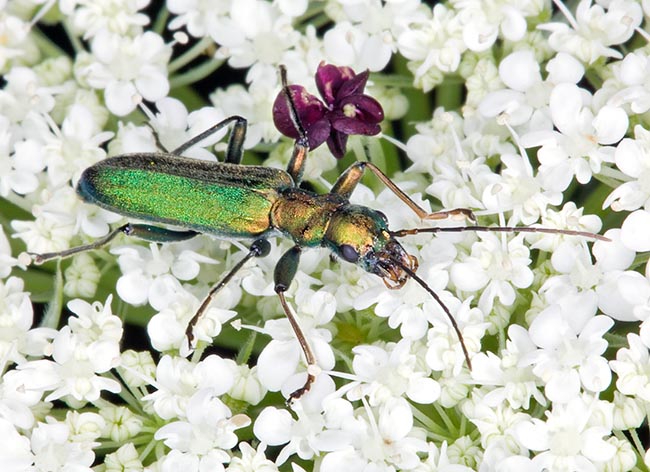 Linnaeus in the tenth edition of his very famous work “Systema Naturae”, in 1758 described and classified this species at the number 28 as Cantharis viridissima (Cantharis in Greek means with cylindrical thorax). Several years later, the species has been classified with the present name.

To the family of the Oedemeridae belong about 100 genera and 1500 species (of which 45 described in Italy) whose main characteristics are the presence of narrow and elongated pronotum, long elytra and long and filiform antennae.

Most of the species (if not them all) present metallic colourations, from the blue to the copper red, at times with aposematic patterns. Even though their body is formed by chitin (like all arthropods), all the species are defined as “soft-bodied”: this is in relation with their slender, small and weak shape of the body; in fact, the size, in length, of the body varies from 5 to 22 mm.

The species is present all over Europe, even if it is more common in the central-south than in the North Europe, and extends up to the eastern zone of the palearctic region (it is not present beyond Siberia). 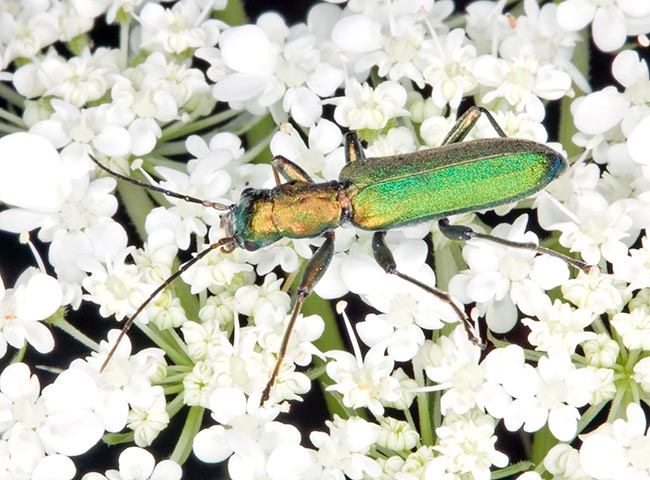 The adults nourish of nectar and pollen, the larvae of dead wood and roots © Giuseppe Mazza

Chrysanthia viridissima is a phytophagous species whose adults, present in woodlands (usually of conifers) or flowery meadows, are easily visible on flowers of Achillea millefolium or Daucus carota (Apiaceae or Umbelliferae) or on cistuses such as the Cistus salviifolius (Fabaceae or Fabaceae) because they nourish of nectar and pollen, whilst the larvae are xylophagous, which means that they nourish of dead wood or of roots.
Morpho-physiology

The adult is about 6-8 mm long and has a metallic green colouration. This colour is due to the presence of micro-sculptures diffused on the entire cuticle. The antennae are long and filiform, formed by 11 antennomeres.

The head is elongated forward and has two pairs of mandibles with labial palpi on the second pair of bifid and soft (they have tactile function) mandibles whilst the eyes are placed laterally. The pronotum is narrow, elongated and heart-shaped. The elytra are laterally bent downward and only slightly narrowed backwards (in fact the wings are not totally enclosed inside the elytra) and each elytron has four pronounced and thin “veins”. Unlike the males of Oedemera nobilis, who have the coxae of the third par of hind legs enlarged, the males Chrysantia viridissima of have all the three pairs of coxae enlarged. The larvae, also them few mm long, present three pairs of appendages, buccal apparatus and soft body.

Like all phytophagous insects, the larvae develop inside roots or dead wood eating it after which they metamorphosize, after various larval stages, in adults (usually in spring-summer) who nourish of pollen and/or nectar as previously mentioned and then lay the eggs close to roots or decayed wood after the reproductive period. Unlike other entomological species, there are no real and proper extensive studies on this species.