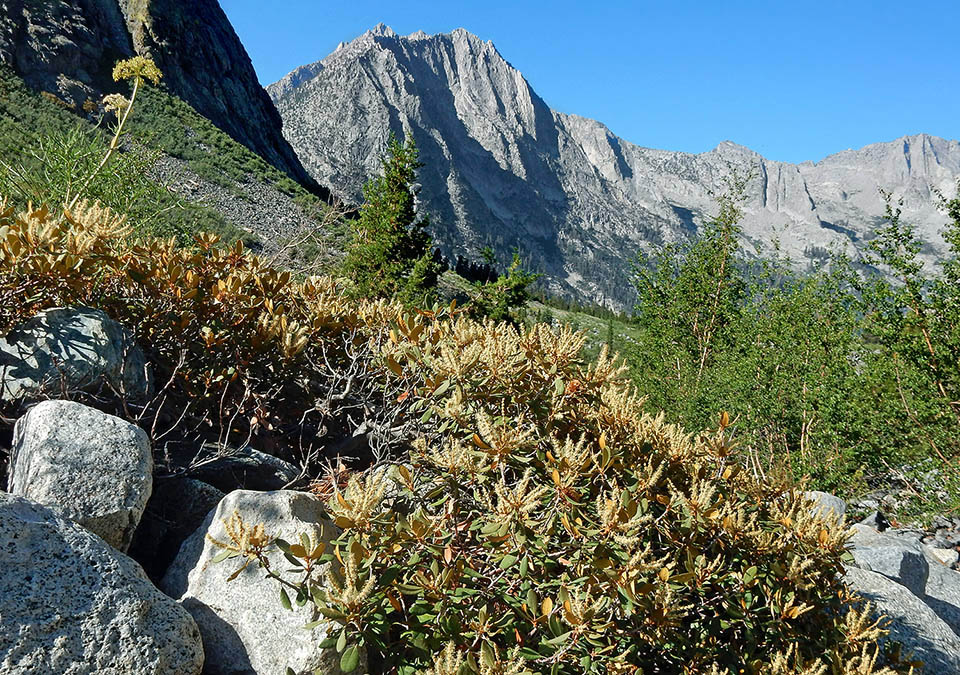 Typical alpine landscape of Chrysolepis sempervirens. Although preferring less chaotic and richer in humus soils, it is frequently found in these, environments reaching, on the mountains of California up to more than 3,500 m asl. The plants of this species easily produce root suckers and in this way they spread over the soil © Matt Lavin

This latter is commonly known as “Bush golden chinquapin” or “Sierra chinquapin“; according to the Merriam-Webster Dictionary, ‘chinquapin’ or ‘chinkapin’ is a word that probably derives from the Algonquian-speaking Native Americans of Virginia, who with the term “chechinquamin” indicated some plants of different genera of Fagaceae that produce fruits enclosed in a very spiny cupule (commonly called “bur” or “burr”) containing one single fruit (C. pumila (L.) Mill. and C. dentata (Marshall) Borkh.); subsequently the term was extended to the North-American Castanopsis (D.Don) Spach and from there even to the Asian ones. This word remained in common use for the two North-American species also when the genus Chrysolepis was created for them.

Chrysolepis sempervirens is a 20-150(250 cm) tall shrub with an expanded crown wider than high and with branches, horizontal to erect, smooth, grey or pale brown; twigs are covered by a thick yellowish down of peltate hair whilst the buds are small, sessile, and largely ovoid. As underlined by the specific name, the plant is evergreen and its leaves, spirally alternate, have the blade, oblong to oblanceolate with a more or less obtuse apex, 15-80 (100) mm long and 12-25 mm broad, with the entire margin; the blade is thick and leathery, above glossy and dark green, below, initially pubescent and gold to rusty, then more or less glabrous and glaucescent; the petiole, 10-15 mm long, is oriented forward. 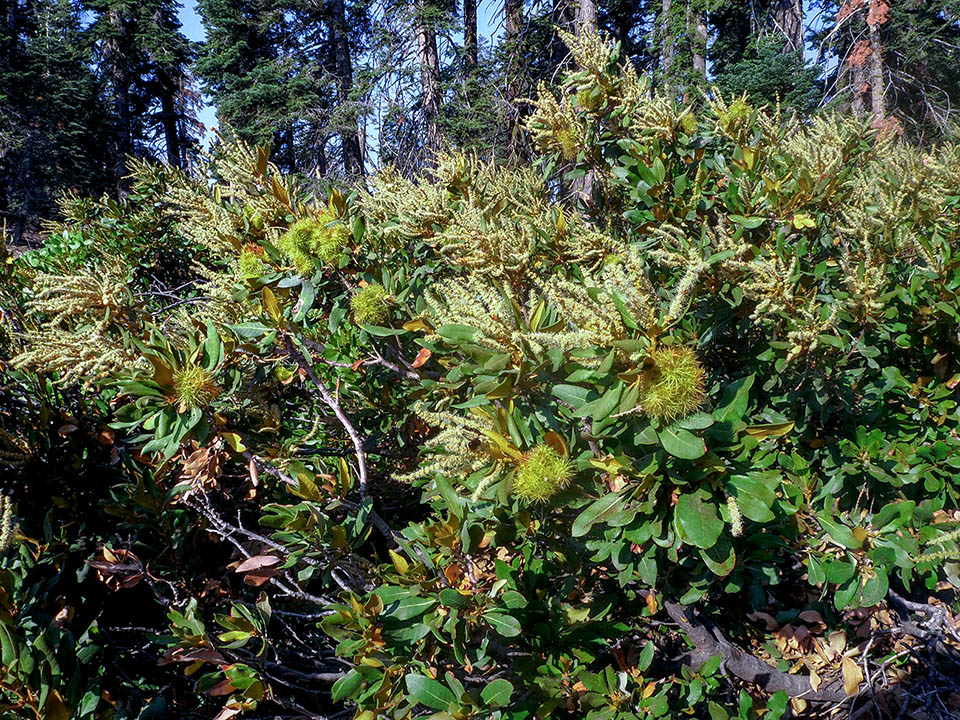 Chrysolepis sempervirens in a clearing at a margin of a conifers wood. This low evergreen shrub can sometimes reach 200-250 cm in height © Laura Camp

The root system has a rhizomatous appearance and can easily differentiate suckers that then growing increase the extent of the root system and, consequently, also that of the plant.

The species is monoecious with flowers carried by unisexual spiciform inflorescences, usually staminate or androgyn, erect, united in small groups and inserted on the shoot in a subapical position; the flowers have the calix with free sepals, the staminate ones have a ‘crown’ of 6-15 stamens surrounding a sterile pistillode, while the pistillate ones, enclosed by 1 to 3 (or more) at the time, inside the cupule , are inserted in the basal portion or, but rarely, are placed on only short pistillate spikelets.

Flowering occurs in summer (July-August) and the pollen grains are dispersed by the wind even if insects may accidentally cover themselves with pollen and become ‘involuntary pollinators’.

The fruit ripens in two years, has a trigonal shape and is 8-13 mm long with hard, lignified, glabrous, glossy brown outer teguments; is completely enclosed in the golden yellow, globose, (2-6 cm of diameter) bur, which contains 1-3 fruits and is made up by 7 valves, 5 external and 2 internal; the latter ones separate the fruits from each other; the valves are free and not fused and are covered by a thick layer of thorns even ramified and very prickly. Although if not particularly sought by man, the fruits are edible; of them, however, are particularly greedy the squirrels. 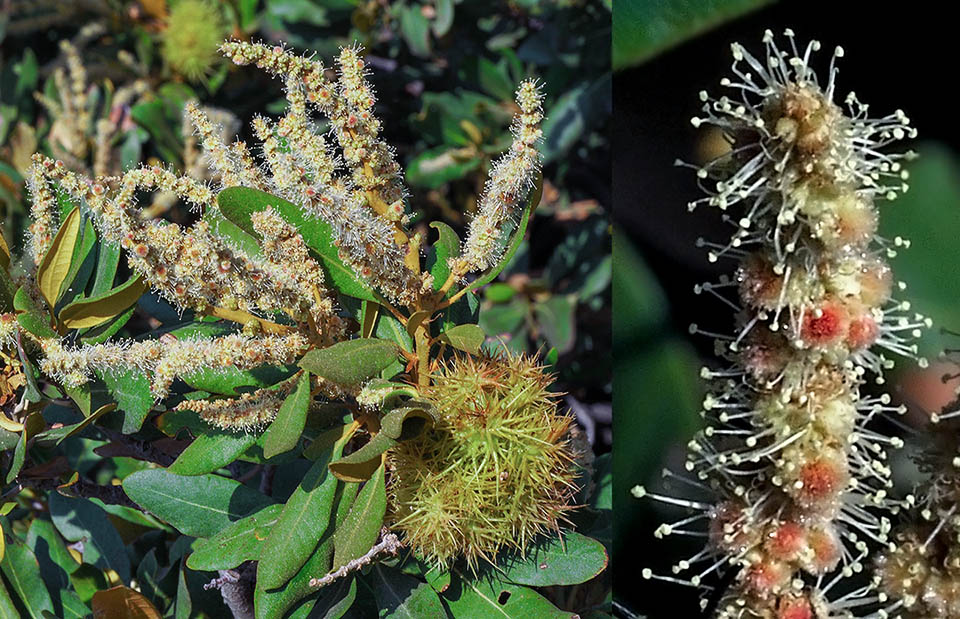 Inflorescences and burs of previous year; on the right detail of the anthers. The pollination is entrusted to the wind and even to insects attracted by the strong musky scent © Laura Camp

As in almost all Fagaceae the chromosome number is 2n = 24. In the second year, between late summer and early autumn, the fruits ripen and soon after they fall from the bur remaining on the ground. They are not dormant and the germination, of hypogeal type, occurs rapidly. Despite the fact that most fruits are eaten by the animals, especially squirrels and other rodents, that its germination rate is not high and that it lives in areas frequently affected by fires, Chrysolepis sempervirens is not considered as an endangered species as it can easily reproduce itself through the emission of root suckers.

Along the axes (peduncle and rachises) of the inflorescences of the plants of this species small globular bodies are frequent, at first tiny and chamois coloured which then reaching 12-24 mm of diameter and becoming reddish to deep red (due to the colour and size they recall the fruits of strawberry tree). They are not natural plant organs, but are galls caused by Dryocosmus castanopsidis, a small wasp of the family Cynipidae (order Hymenoptera) which lays its eggs inside the axes of inflorescences of Chrysolepis sempervirens and, less frequently, of Chrysolepis chrysophylla. Numerous are the cynipids causing galls on many fagaceae, especially oaks, but , in particular, must be remembered that from the early years of this century Dryocosmus kuriphilus, the chestnut gall wasp which causes galls on the buds and on the young leaves of chestnut trees have reached Europe from eastern Asia producing very serious damages in chestnut groves. 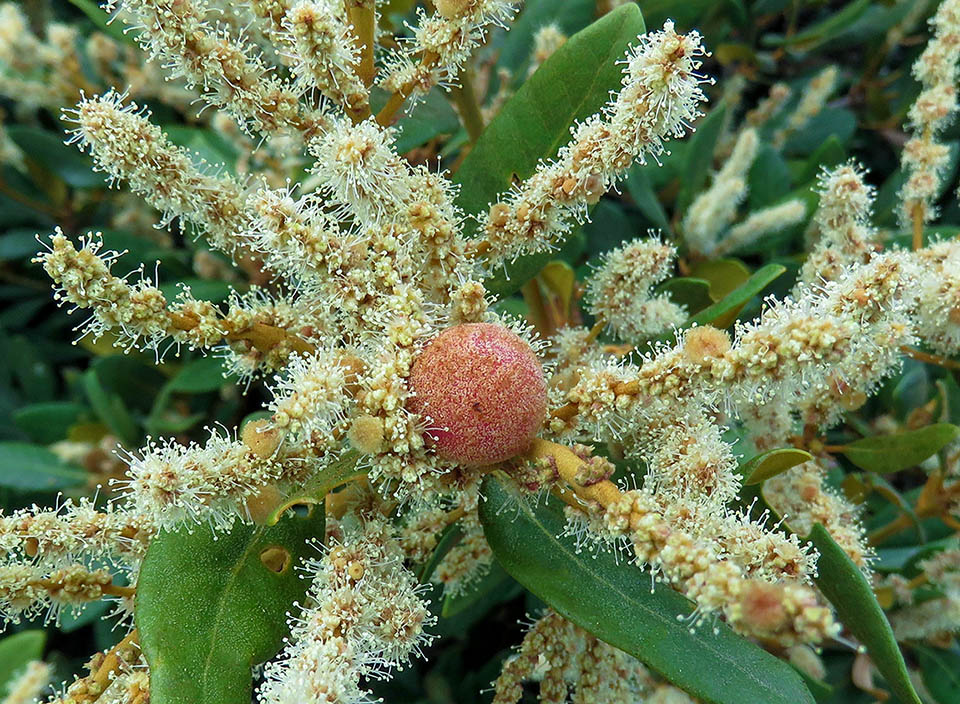 Among inflorescences may be note small globular bodies at first tiny and of a chamois colour which then reach 12-24 mm of diameter and become reddish to intense red. As sometimes happens with the oaks and the chestnuts, they are galls caused by a small wasp that lays eggs inside the axes (peduncle and rachises) of the inflorescence © Wayne Washam

Most Chrysolepis sempervirens plants grow along the coastal regions of California and central-southern Oregon on soils covered by coniferous woods or in more arid areas characterized by a chaparral shrubland (a summer-drought-tolerant community of sclerophyllous evergreen plants, at altitudes mainly between 500 and 1800 m asl, descending in the more northern and humid zones up to the sea level or reaching up to 3600 m and exceeding the upper wood treeline. In these regions the climate is characterized by hot dry summers whilst the precipitations (rain and snow) are concentrated in the period from autumn to spring.

This species is moderately tolerant of shade and this allows to live together with the young populations of conifers at least till when the foliage of these last do not completely close the canopy threatening the survival of the chinquapin but Chrysolepis sempervirens vegetates even along steep slopes with chaotic piles of rocks and debris where it forms clonal nuclei of shrubs thanks to the possibility to produce suckers from the roots.

This strategy allows the plants of Chrysolepis sempervirens not only to overcome the passage of fire but also to take advantage (pyrophytism) from this factor in itself catastrophic because, even if they burn like the other plants, they can easily recover emitting suckers from the root system if it has remained sufficiently ininjuried. . Moreover, along the stony slopes where the vegetation is discontinuous it would be very difficult that the fire could expand through them. 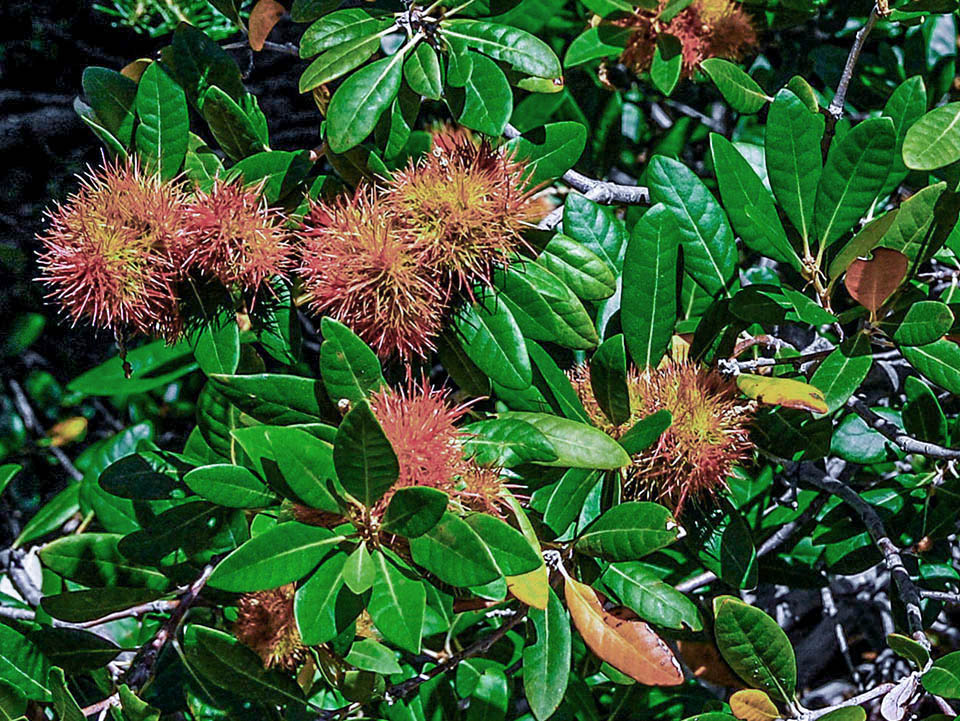 Adult leaves and ripe burs. They contain 1-2 trigonal, glabrous and glossy fruits. They are edible, particularly appetite by rodents that then spread the seeds © John W Little

The other species of the genus Chrysolepis is Chrysolepis chrysophylla (Douglas ex Hook.) Hjelmq. It is commonly called “Giant golden chikapin” and already from the comparison between the common names of the two species one of the morphological traits is highlighted: the height (it can exceed 30 m) that this second species can reach.

It is a slender tree with thick and wrinkly rhytidome, it has narrower leaves ending in a long pointed apex whilst the blade is always covered on both sides by a dense golden pubescence; the petiole is shorter than that of the other species (less than 10 mm). It is diffused widespread in the same regions but is more termophilous and usually does not exceed the altitude of 1,500 (2,000) m. Transplanting is often risky. This species is divided in two varieties (var. chrysophylla, corresponding to the type form, and var. minor with a shrubby posture) which, where both are present, they generate individuals of intermediate size. The shrubby form is employed with ornamental purposes, and due to the posture, is often mistaken with Chrysolepis sempervirens.

The two species were previously inserted in the genus Castanopsis (D.Don) Spach, but in 1948 Karl J.H. Hjelmquist, especially for to the differences between the cupules, has detached the two American species (all other Castanopsis were Asian), and has inserted them in the genus Chrysolepis; for this reason the binomial names Castanopsis sempervirens (Kellogg) Dudley and Castanopsis chrysophylla A.DC. they remained only as synonyms.