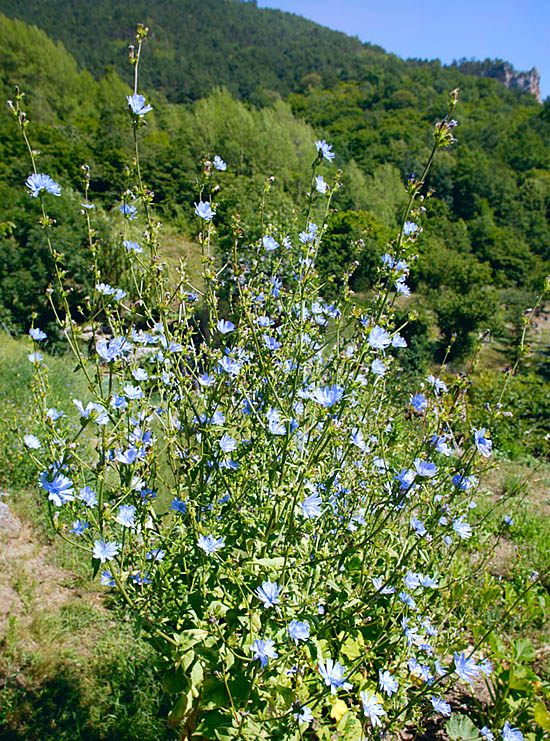 The common chicory or wild endive (Cichorium intybus L. 1753) is a cosmopolitan plant, diffused in all the zones of the world, but the desertic and iced ones, from the plain to the mountain up to 1200 m of altitude, in the uncultivated places, along the borders of the roads, in the resting fields, in soils tendentially dry and with alkaline reaction.

The name of the genus “cichorium” comes from the old Greek “kikhéo”, I look, I find, and from “oros”, mountain, or also margin, for the habitat. Others refer the name to the Arabic term “chikouryeh”, which indicated the plant.

The name of the species “intybus” is the old name of the chicory after Pliny, of uncertain origin, maybe derived from the Greek “éntibon”.

Very young basal leaves often with only indented lamina, petiolate, when more mature mostly runcinate (with segments having apex curved downwards, like in the blade of the billhook), more or less hairy-coarse, in rosettes, frequently suffused of reddish especially on the main nervation. Along the stem, they are arranged in an alternate way.

Multi-flower capitula, united 1-5 in sessile axillar groups, which appear from June to October. Summer-autumn flowering; flowers with light blue ligulas (quite rarely white or pink) which open in the morning and turn towards the sun, closing with bad weather and on late afternoon. The pollen of the chicory may cause allergies (hay fever). The fruits are pale brown achenes of 2-3 mm; of oval-pyramidal shape, surmounted by a small crown of very short straws.

It grows on the margins of the fields and of the roads, orchards, and rubbish soils. It is a species indicating the presence of lime and/or clay in the soil. In autumn and early spring, the roots are gathered for herbalistic purposes. 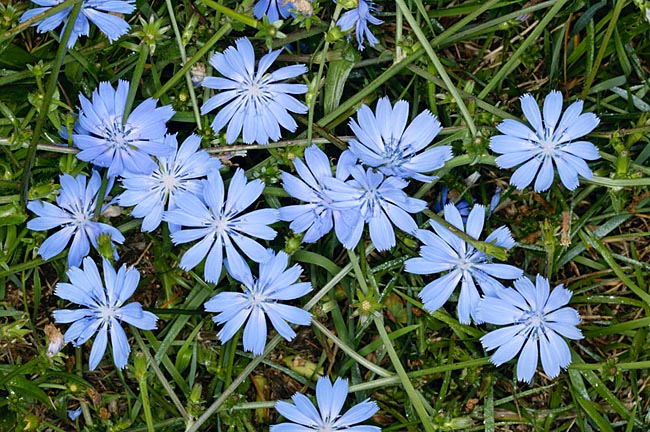 The capitula, with usually light blue ligulae, open the morning with the sun and close the afternoon © Mazza

The chicory is very well known also for its roasted root which furnishes a good substitute of the coffee and which had the highest fame two centuries ago: in 1882 there were in Europe 130 plants furnishing the so-called “Dutch coffee” or Prussian coffee, the first ones, dated of the early decades of 1800, were built little after the Napoleonian Continental Blockade (1802) which hindered even the importations of coffee, others came to life for the same reason during the Second World War.

It’s the famous “ciofeca” (drink of bad quality) the prince De Curtis, stage name Totò, loved to remind in his extraordinary jokes, healthy and caffeine-free, therefore good also for the kids and the sick, and which still now appears on the shelves of the supermarkets as well as in the big glass jars of old spice shops. As a matter of fact, from the roasting of the roots develop more than 30 substances, among which the acetophenone, present also in the coffee aroma. 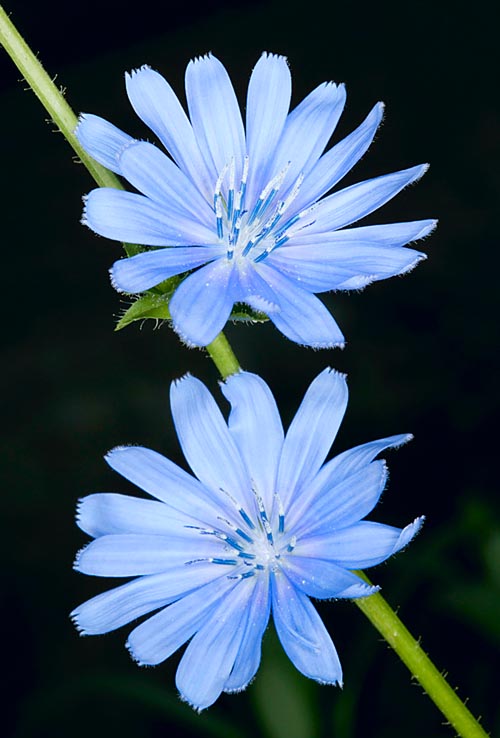 Pollen causes allergies. A coffee substitute is gotten from the root © Giuseppe Mazza

The young leaves, especially those of reddened varieties (rich of healthy anthocyanins) are widely cultivated as vegetable to be consumed fresh or, more frequently, cooked.

Particularly praised are the “Capuchin’s beard” chicory, of Belgian origin, and the Italian “trevisana”, “spadona”, “variegated of Castelfranco and of Chioggia”, “white of Milan”, “Brindisi chicory”, “Gorizia pink”, etc. and the famous “Soncino bitter root chicory”.

The leaves of the “wild chicory” are furthermore an excellent food for the courtyard animals and, as reminded in an agronomy nineteenth century text, “… it is appreciated by the cattle and serves as flavouring in the hay.”

The other similar species, the endive (Cichorium endivia L.), which shares a portion of its distribution with the common chicory, is widely cultivated and furnishes the famous vegetable “endive” or “escarole”.

The tenderest leaves of the wild chicory are to be harvested in spring and may be added to the mixed salads; with the mature ones, more bitter, they prepare stews and soups, or, after boiling, are used for the omelettes.

This plant was already known at the time of the old Egypt and is cited in the Erbes Papyrus (about 1550 BC).

It was greatly considered as vegetable and was always present on the tables of the Romans, consumed in huge quantities during their famous Lucullan meals because its properties were well known.

Also on the table of the poor people of that time the chicory was not missing as Ovid states: “Me pascunt olivae, me cichorea, levesque malvae …”.

A healthy decoction is prepared with one spoon of dried root in 200 ml of boiling water for 15 minutes and is drunk lukewarm half an hour before the main meals.