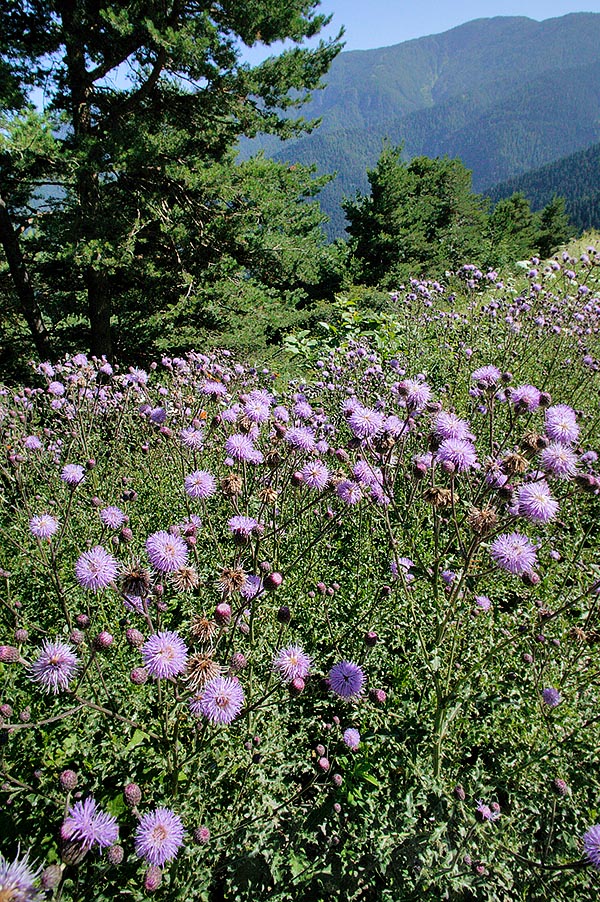 Although often adorning our alpine pastures, Cirsium arvense is a weed of Euroasian origin © G. Mazza

The well known Field thistle or Creeping thistle or Canadian thistle (Cirsium arvense (L.) Scopoli) is a perennial weedy plant belonging to the vast family of the Asteraceae grouping about 23.600 species.

Though it has characteristics very close to the artichoke and the thistle with which it shares the same number of chromosomes, (2n=34), the field thistle is definitely not a friend of man. Besides having the power of irritating our skin, is able, in the same time, to upset the farmers and the horticulturists of many countries.

Should we have to organize a championship among the herbaceous plants that bite and scratch, the group of the thistles could aspire to the podium without any difficulty. When these invaders have installed in our field, it is practically impossible to walk on bare foot or with bare legs, to lie quietly in the grass to admire your garden and your cultures or even to greeze peacefully … if you are cow or sheep.

To effectively fight these species and bear them off, the best way is to get a thourough knowledge of them.

Here is therefore the identity card of one of its worst members: the Cirsium arvense … and, above all, no mercy if you find it in along your way.

The etymology of the genus Cirsium comes from the Greek “kirkos” = varices, spider veins and also from kirsion, the old name of a thistle that was rightly used for treating this pathology. In some regions it is still varices grass.

Conversely, from the Latin comes the name of the species arvense = of the meadows, rightly to indicate the habitat where it lives.

Many are the ways under which it is commonly called all over Europe, seen its vast diffusion.

In France, cirse des champs, le mal aimé, chardon hémorrhoïdal, chardon des vignes, sarrète des champs; in Italy, stoppione minore, scardaccione, spione, cardo campestre; in English, creeping thistle and, strangely enough, Canadian thistle (plant in any case unknown in the past in that country) and in German, Acker-Kratzdistel. From the taxonomical point of view, it belongs to the subfamily Cardueae (= Cynareae), characterized by pink, blue or purple tubular flowers.

The genus Cirsium counts about one hundred species in the northern hemisphere, characterized, as is our case, by the presence of thorns and feathery pappies. Cirsium arvense is a typical Eurasian plant growing in Europe, in Middle East up to Siberia and Japan and in the northern side of the African continent. In Italy it is vastly diffused all over the territory with colonizations in altitude up to subalpine levels. It has been accidentally introduced by the man in the other continents. In North America is a weed in the US and Canadian cultivations whilst in the southern part of the continent the most affected is Brazil.

It is a very common plant with a vegetative plan going from the plain to the hill and mountain (subalpine) levels. It loves the meadows, the pathways, the uncultivated places with debris and ruins and also areas with intensive cultivations. 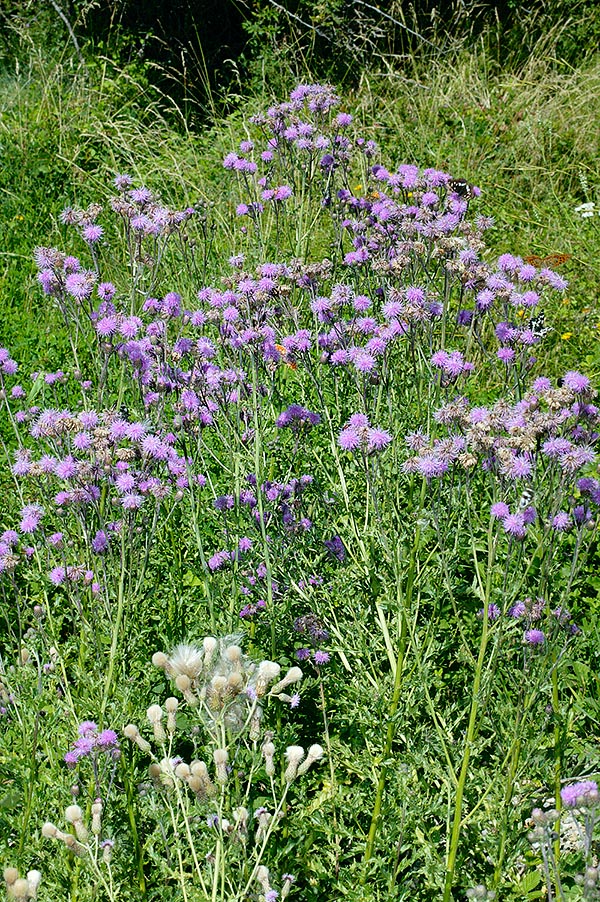 It may reach 150 cm with ramified stem. The roots initially show a vertical taproot from which depart creeping rhizomes that are weatherproof and diffuse the plant © Giuseppe Mazza

It is a heliophilous plant loving the light and preferring the neutral but sufficiently rich in nitrates soils. Adventitiuous plant very intrusive and dangerous for the agricultural cultivations, propagates very quickly with its rhizomes difficult to be grubbed and in the cultivated soils, subject to agricultural work, it reproduces even by single root fragments.

The arrival of the plant is casual and sudden. It is found on the cultivated fields as if it had been deliberately sown and suddenly dramatically multiplies.

These plants are a nuisance for the cultivations as they exploit and deduct in their favour water and light.

They can be also carriers of many dangers and transmit diseases harmful to the crops. The economic impact of this competition manifests itself in the short term, with a neat decrease of the agricultural yield and in the long term, with the dramatic increase of its presence due to the continuous dissemination of their seeds on the ground.

Moreover, the cost of the chemical weed control represents one of the main expenses for the agriculture, in particular in the case of the cultivations of colza and of sugar beet. Among the enemies of the main crops, these weeds occupy a very important position.

The field thistle is a perennial herbaceous plant very common, resistant, with thorny leaves and its lilac capitula.

It reaches a height of 50-120 cm with peaks upto 150 cm, with stem erect and ramified in the upper part, not winged, unarmed, woolly on top and hairless down. It has cauline sessile leaves, at times protruding slightly decurrent, never wrapping, sparse, intense green, hairless above, greenish to pubescent grey in the lower page, oblong-lanceolate, toothed on the edges, pinnatifid or pinnatisect, with spiny ciliate edges.

Ovoid or subcylindrical involucre, hairless or almost so, with phyllaries (involucral bracts) median and outer lanceolate, pointed, erect and with the apex turned a little outwards. Small capitula, unisexual (the plant is almost always dioecious), in corymbiform panicles, purplish and odorous tubulose flowers (July to September).

It is a melliferous plant that attracts syrphids and pollinating butterflies and that when ripe bears in the capitula a large white silky tuft (the plumes). The fruits of the field thistle are elongated achenes equipped with a silky and feathered plume (pappus), easily disseminated by the wind (anemophilous). It is a very palatable fruit for a remarkable number of species of granivorous birds who assiduously visit these fields in late summer in particular many finches, greenfinches, linnets and especially the Goldfinch (Carduelis carduelis) who, with its long pointed beak has specialized in the extraction, in autumn-winter, of the difficult to access seeds such as those of the thistles and of the Cirsium arvense.

The roots initially show a vertical taproot from which depart creeping lateral roots (whitish rhizome, horizontal and deep) carrying several adventitious buds that guarantee the perpetuity to the plant. This rooting system causes a strong expansion in the growth of the plant, to form more or less round circles and more and more extended.

The capitula, rich of nectar, are pollinated by bees and butterflies © Giuseppe Mazza

It is a geophytic plant, with the buds carried by the rhizomes under the level of the soil. The aerial part of the plant disappears during the bad season and the surival organs present in the soil may resist to even difficult conditions. These ones originate then in spring some rosettes that produce some erect stems that may grow even 3 cm per day.

The thistle is integral part of the menu of the field vole (Microtus sp). The cows do not graze it at all but before the blooming and when not yet well developped, it may be appreciated by the donkeys. The field thistle is attacked by some fourty species of insects, half of which hit the inner tissues of the aerial parts (collet, stem, leaves and capitula) and the other half the outer tissues whilst a reduced number attacks directly the roots. Some of them are eriophyid mites (Eriophyoidea) of the species Aceria anthocoptes or parasites like Urophora cardui (L.1758) or aphids (Aphidiidae). Worthy of curiosity is also a curculionid classified in the tribe of the Weevils, the Larinus planus, native to central and eastern Europeup to Caucasus including Denmark and the southern part of Norway, accidentally diffused during the seventies also in North America and that now is utilized for the fight against the invasion of the field thistle and also of the Cirsius undulatum, a thistle endemic to the centre and south of this continent. 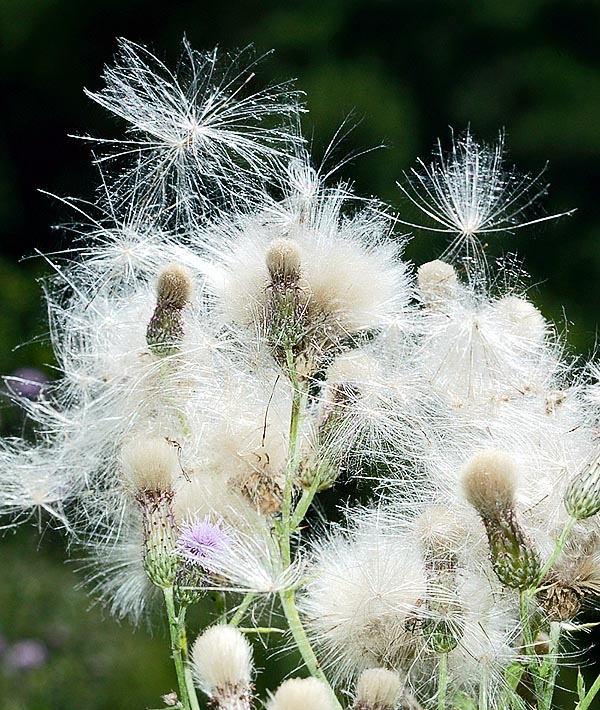 The seeds contain toxic alkaloids, but in winter are an important source of food for many granivores, especially the goldfinches © Giuseppe Mazza

Collection for culinary use

In a general way, all species of thistle when young, with just formed rosettes, have the stems and the central nervations of the leaves edible, in particular those of the Siberian thistle (Cirsium oleraceum) rightly called cabbage thistle by the British.

The difficulty stands in paying attention in not getting stung. All young stems are good when consumed raw, till when they are tender. As is the case of the artichoke, their taste may be at times sweet or salted.

Like all thistles, this plant is little utilized for medicinal purposes. The achenes do contain some toxic alkaloids and in the underground parts is present also the inulin, a common polysaccharide, typical of the Asteraceae.

The field thistle contains also a glucoside that gives, under the action of the hydrocyanic acid, a second glucoside, the tiliacin, the same present in the linden flowers. The flowers do also contain some curd similar to that present in other thistles, the same used for coagulating the milk. Recently, a process has allowed to obtain from the Cirsium arvense a coagulating proteolytic enzyme based on C-protease.

The physical chemical and biochemical properties of this extract have been determined by comparing them with those of the curd and the C-protease has proved to be the most resistant to heat among all the coagulating enzymes known nowadays.

At temperatures ranging from 30 and 50 °C, the enzyme obtained behaved like that of the curd. Therefore, it did show marked proteolytic properties over the 50 °C, and, starting from the 60 °C, the increase of the non proteic acid did increase proportionally in the time. The aptitude by the C-protease in the hydrolysis of the proteins at about 100 °C, can be much useful and consequently the Cirsium arvense represents a cheap and easy to find raw material for the production of an enzyme preparation. (S. POZNANSKI, A. REPS and ELZBIETA DOWLASZEWICZ, Coagulating and proteolytic properties of the protease extracted from the Cirsium arvense) Institute of Genetics and Alimentary Biotechnology – Olsztyn Agrarian University.