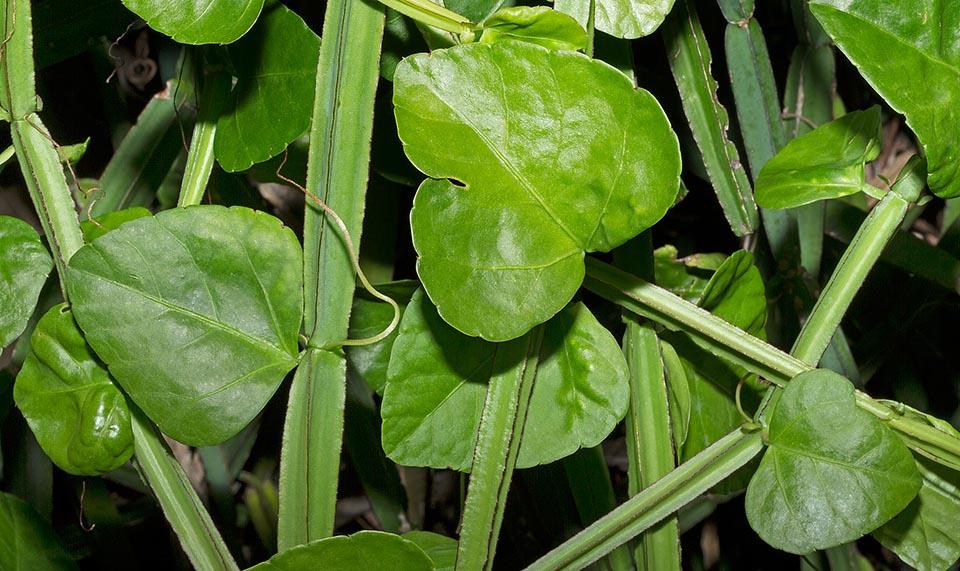 Cissus quadrangularis is native to Africa and tropical Asia where grows in the savannahs, dry deciduous forests and generally semiarid zones up to about 2000 m of altitude. Medicinal virtues. The young buds and leaves, caustic and acrid, rich in vitamin C, carotene and calcium, are locally consumed as vegetable © Giuseppe Mazza

The generic name comes from the Greek name of the ivy “κισσός (cissos); the specific name is the Latin adjective “quadrangularis” = quadrangular, with reference to the shape of the stem. 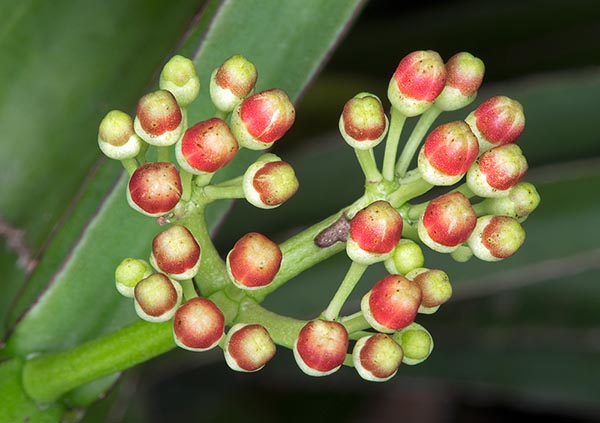 The infloresceces, red while growing, are compound umbels on short peduncle opposite to the leaves © Giuseppe Mazza

The Cissus quadrangularis L. (1767) is a perennial herbaceous species, deciduous, procumbent or climbing, ramified, that can be some metres long anchoring on the supports by means of simple cirri opposite to the leaves. Succulent stems of green colour restricted on the nodes, spaced 10-20 cm, with quadrangular section, 0,5-2,5 cm broad, with protruding edges margined of reddish brown. The leaves, on a 0,5-2 cm long petiole, are alternate, rather fleshy, usually simple, ovate-cordate with obtuse apex and entire or crenate-serrate margin, at times trilobed, 2-6 cm long and broad, of pale green colour, of short duration on the plant, 2-4 months, with the chlorophyllous function perfomed mainly by the stems.

The inflorescences, on a 1-2,5 cm long peduncle opposite to the leaves, are compound umbels bearing tiny greenish or white-pink bisexual flowers with calyx having 4 small teeth, about 1 mm long, corolla with 4 oblong-ovate petals with pointed apex, retroflexed, precociously deciduous, about 2 mm long, and 4 stamina opposed to the petals. The fruits are fleshy globose berries, with particularly sour taste, of 0,7-1,2 cm of diameter, initially green, then dark red when ripe, containing one obovate seed of 0,4-0,6 cm of diameter.

It reproduces by seed, in draining loam maintaining humid at the temperature of 24-26 °C, and by offshoot, air layering and stem cutting with 2-3 nodes.

Vastly diffused species in the most arid areas of Africa and Asia, is at times cultivated for ornamental pourposes in full sun and on perfectly draining soils, even if poor, slightly acidic to slightly alkaline, in the tropical and subtropical semiarid regions and marginally in the mildest temperate-warm ones in position sheltered from the winter rains. More often, it is grown in pot by the succulents’ collectors, in full sun or anyway at the maximum possible luminosity, with quite moderate waterings in winter and lowest night values not under the 10 °C. 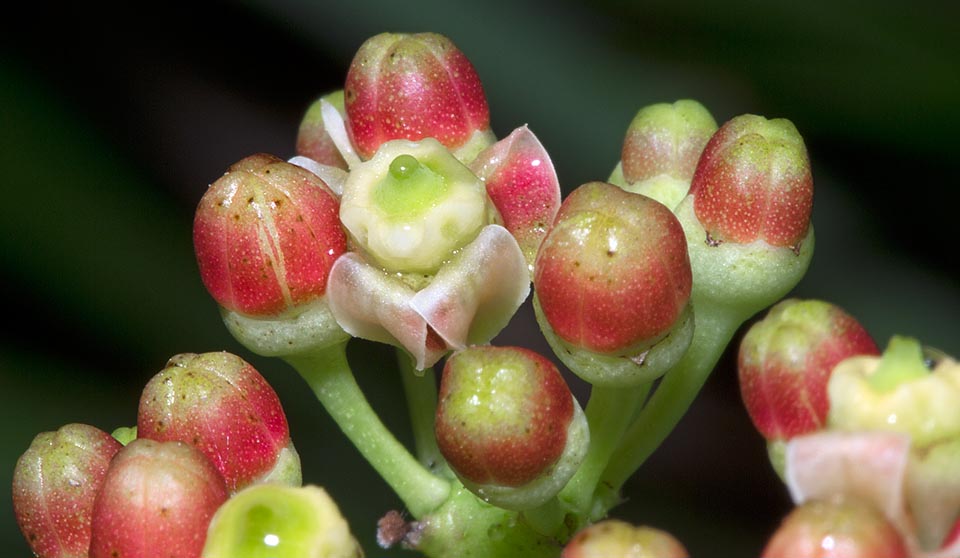 The young buds and the leaves, despite being caustic and of acrid taste, rich in vitamin C, carotene and calcium, are locally consumed as vegetable; from the stems and the roots they furthermore get robust fibres. All parts of the plant are utilized since remote times in the traditional medicine, in particular the Indian one, for the alleged analgesic, antioxidant, antimicrobial, gastroprotective properties and for the positive effects in obesity, osteoporosis and in the fractures healings processes, are underway laboratory studies to verify their properties, the side efects and to isolate the present active principles.

→ To appreciate the biodiversity within VITACEAE family please click here.