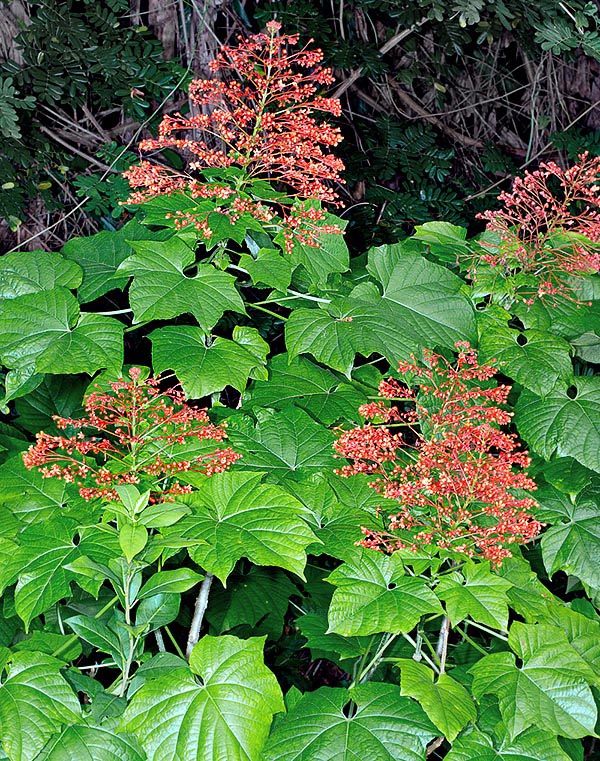 The name of the genus is the combination of the Greek terms “κλῆρος” (cleros) = fate and “δένδρον” (dendron) = tree, name given by Johannes Burman (1707-1780), taken up by Linnaeus, to a plant that in Ceylonese was called “pinnacola” = ill-fated ; the specific name is the Latin adjective “paniculatus, a, um” = equipped with panicle, with reference to the inflorescence.

The leaves, on a 4-30 cm long pubescent petiole, are opposite, 5-24 cm long and 8-30 cm broad, irregularly palmatelobed, with cordate base and 3-5 (rarely 7) lobes with entire margins or slightly toothed and pointed apices, of glossy dark green colour above and rough to the touch, dotted of tiny whitish scales below. 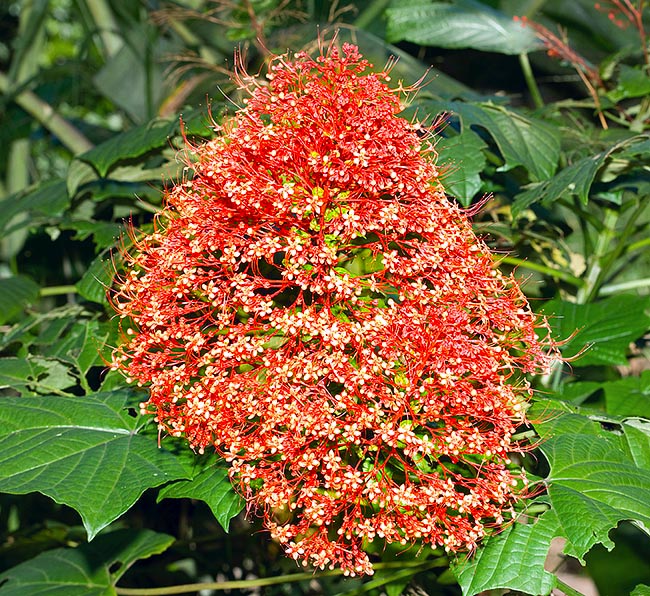 Native to South-East Asia, has at once entered as ornamental plant the tropical gardens for its showy inflorescences that can reach 60 cm. Leaves and roots have also medicinal virtues © Giuseppe Mazza

Panicle erect terminal inflorescences, 15-60 cm long, with leaves of reduced size at the nodes and reddish ramifications (whitish in the white flower variety), carrying a myriad of flowers, on a 1,2 cm long pedicel, hermaphroditic, opening in succession, of about 1,5 cm of diameter, usually of orange red colour, less frequently white.

Campanulate calyx deeply engraved in 5 lanceolate lobes with obtuse or acute apex, about 0,5 cm long, imbutiform corolla with thin tube, 1,2-2 cm long, and 5 oblong-ovate lobes, 0,6 cm long, 4 ascending stamina of the same colour as the corolla, 4-5 cm long, quadrilocular ovary and style, about of the same length as the stamina, bilobed at the apex.

The fruits are globose 4 cells drupes with persistent lobes of the calyx, of 0,5-0,8 cm of diameter, initially green, then bluish to black when ripe, containing 4 seeds (one per cell).

It reproduces by seed, rarely produced out from the origin zones, through the root suckers coming out close to the base of the plant and by cutting in summer, utilizing portions of semi-woody stem, devoid of almost all the leaves, placed to root in a substratum formed per at least 50% by perlite, maintained constantly humid. Amply cultivated due to the showy long lasting inflorescences and the ornamental foliage in the gardens of the tropical and humid subtropical climate countries where often has naturalized becoming in some instances invasive. 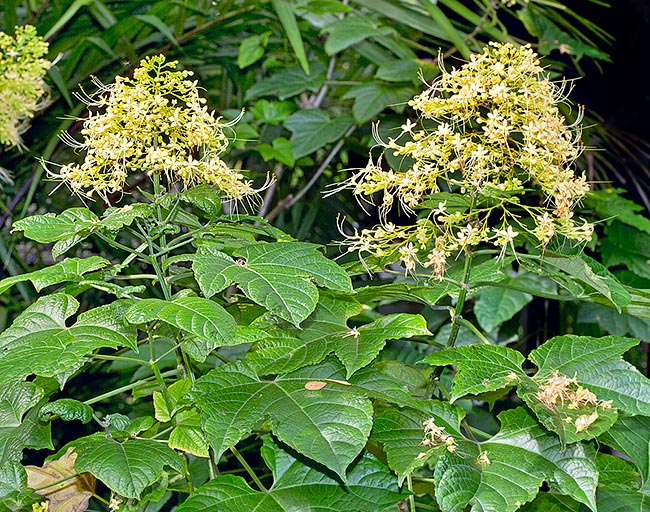 A yellowish white variety does exist, at once multiplied by the horticulturists © Giuseppe Mazza

It may be tried its cultivation in the warm temperate climate zones where temperatures litle less than 0 °C are exceptional events and of short duration, loosing in such case the leaves in winter and possibly the aerial part, but revegetating from the base in spring.

Fast growing and of easy cultivation requires an exposition preferably in full sun, even if it stands a slight shade, and is not particular about the soil, even if growing best in the fertile and well drained ones, maintained almost con- stantly humid, acidic to slightly alkaline.

Useful are periodical fertilizations with a balanced product during the vegetative season and a light pruning by the end of blooming in order to maintain a compact posture.

It can be cultivated in capacious containers, utilizing an organic loam with addition of sand or perlite per a 30%, to be sheltered during the coldest months where the climate does not allow the open air permanence, for the decoration of greenhouses, winter gardens and verandahs, in an as much as possible luminous position and with lowest night temperatures over the 14 °C. The waterings must be regular and abundant in summer, spaced in winter, but without ever allowing the substratum to dry up completely. 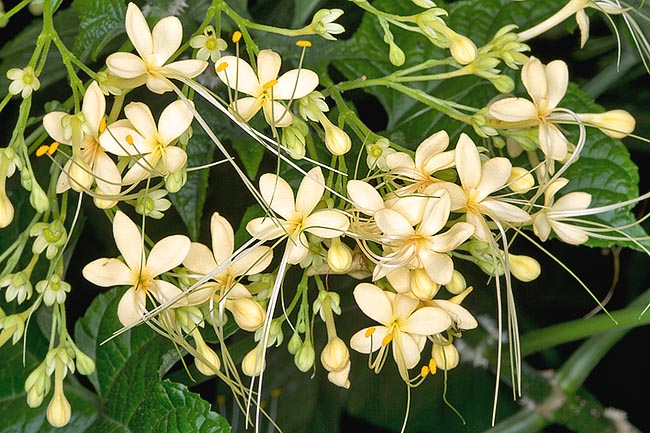 The leaves and the roots are variously utilized in the traditional medicine, in particular Chinese and Indian, for various pathologies, mainly as febrifuge, antirheumatic and in the malaria care and of venereal diseases. In some countries of South-East Asia, such as Malaysia, it holds also an important role in magic rituals, attributing it the power to protect from evil and to evoke the spirits.