The name of the genus is the combination of the Greek terms “κλῆρος” (cleros) = fate and “δένδρον” (dendron) = tree, name given by Johannes Burman (1707-1780), taken by Linnaeus, to a plant that in Sinhalese was called “pinnacola” = ill-fated; the specific name is the Latin present participle “splendens, entis” = shining, from the verb “splendeo” = to shine.

The Clerodendrum splendens G.Don (1824) is a woody evergreen sarmentose or climbing shrub with stems having quadrangular section up to more than 4 m long. 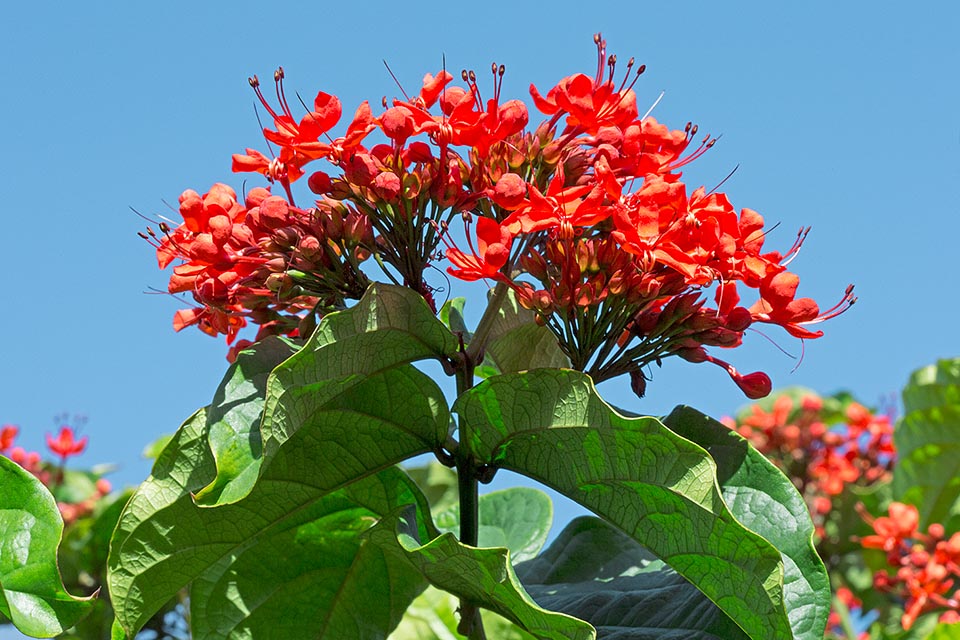 Native to Tropical Africa, the Clerodendrum splendens is a sarmentose or climbing shrub, evergreen woody, with even 4 m long quadrangular stems. Born for the tropical and subtropical regions, it is noted several times a year for the showy inflorescences, adapting, marginally, to the warm temperate climates © Giuseppe Mazza

The leaves, on a 0,5-2 cm long petiole, are simple, opposite ovate-elliptical with acute margin and slightly wavy entire margin, of dark green colour and glossy above, paler below, coriaceous and deeply veined, 5-18 cm long and 4-10 cm broad. The inflorescences are terminal and axillar corymbiform cymes, compact, up to about 20 cm broad, with numerous flowers, of 3 cm of diameter, bisexual, with campanulate calyx, 0,6-1 cm long , with 5 deeply incised lobes with acute apex, persistent, of purple red colour. Hypocrateriform corolla (with spread lobes perpendicular to a long thin tube) with 5 oblanceolate lobes of bright red colour or orange red, thin corolline tube, 2-4 cm long, and 4 prominent stamens from didynamous (two longer and to shorter) to almost equal. The flowers are proterandrous (the male organs ripe before the female ones), this favours the crossed fertilization. Fleshy drupaceous fruits, about 1,5 cm long, of blackish purple colour, rarely produced outside the origin zones.

It propagates by seed, previously scarified and kept in water for one day, in draining loam maintained constantly humid, but without stagnations, at the temperature of 24-28 °C, with germination times around three weeks, but usually and easily by semi-woody cutting in spring-summer and through root suckers it produces frequently.

Splendid climber blooming several times during the year, but with a peak in December/January, when the blossomings in the gardens are quite scarce, cultivable in the tropical, subtropical and marginally warm temperate climate regions, where it can stand short decreases of temperature just under the 0 °C, possibly with the loss of the aerial part, but revegetating in spring from the roots.

It needs suitable supports where to climb, unless we want to utilize it as groundcover. Requires full sun or a slight shade during the warmest hours of the day and fertile and well drained soils, acidic to slightly alkaline, maintained almost constantly humid; timely toppings after the blooming do stimulate the forming of new inflorescences. Where the climate does not allow the open air cultivation, it can be cultivated in pot, to be then sheltered during the coldest months in greenhouses or in luminous verandahs, with regular and abundant waterings from spring to autumn, more spaced in winter in order to allow the substratum to partially dry up, using for the fertilizations slow releasing products.

Parts of the plant, especially the leaves, are utilized in the traditional medicine by the African populations, in particular for wounds and infections, their decoction is also used as intestinal antiparasitic. Laboratory studies have evidenced a remarkable anti-inflammatory and anti-microbial activity of the extracts of the leaves and moreover a beneficial immunomodulatory activity of the polysaccharides contained in them in the autoimmune encephalomyelitis.