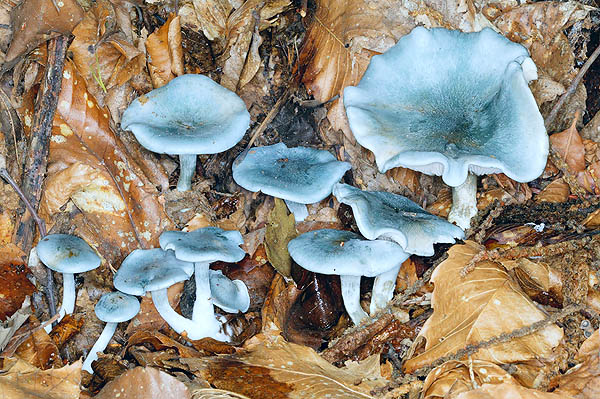 The etymon of the name comes from the Latin “odorus” , which means “odorous”, due to the strong smell it emanates.

To the genus Clitocybe belong carpophores having as main characteristic the usually umbonate and decurrent gills. The cap is usually dry, rather scaly, pruinose, glazed, hygrophanous; the margin is usually smooth, striate in transparence in the hygrophanous species. Usually, the stem is thick, smooth, fibrillose, often with abundant mycelium at the base, rhizomorphous at times. The spores are smooth, amyloid, cyanophilous at times. The gills structure is parallel and often joint buckles are present, cheilocystidia are absent. The spores in mass are white, yellow, or pink cream. In the genus Clitocybe are present many species which cause even serious poisonings, with muscarine, coprine, gastrointestinal, haemolytic, acromelalgic syndromes. The edible species are very few. The Clitocybe are saprotrophic fungi, growing in woods, meadows, ground with or without grass and on decaying wood.

To the subgenus Disciformis do belong more or less fleshy species, robust, with glabrous surface of the cap, with non fusiform, whitish, yellowish or pink spores. To the Section Odorae belong species not much clitocyboid, with scent of aniseed, and/or more or less greenish colour.

Cap: 3-7 cm, convex at the beginning, then flat or slightly depressed, edge incurved at first, then straight, not striate; smooth surface, pruinose, not much hygrophanous, blue-green colour, paler with the age. 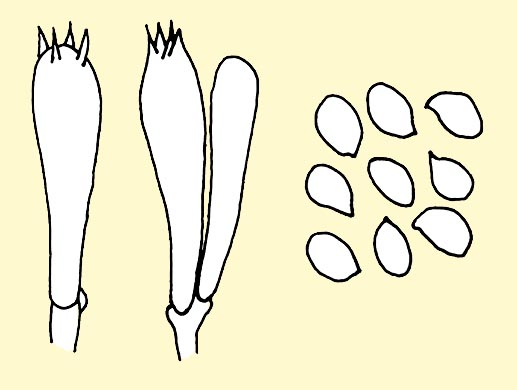 Stem: 3-7 x 0,5-1 cm, cylindrical, or even clavate, thick, then stuffed, fibrous, fistulous, concolorous to the cap or paler, white and cottony at the base.

Habitat: it grows in summer and in autumn, both under broad-leaved and coniferous trees, very common.

Edibility: edible. The alimentary consumption is not recommended, because by cooking, the scent and the taste of anis are exalted, and these are not suitable for salted dishes; its utilization, anyway, is to be kept in mind for preparing ice-creams with anis flavour.

Remarks: species easily identifiable, even only due to the smell of pure anis emanated and its greenish colour. The only organoleptic characteristic might induce us in mistaking it with Clitocybe fragrans (Withering : Fries) Kummer, which, anyway, has colours with chestnut beige, grey-brown, gradations and a darker centre; with the Clitocybe obsoleta (Batsch : Fries) Quélet, which is of a pink-brown grey, pale rosy-brown, colour; with the Clitocybe angustissima (Lasch) Kummer, which is of a brownish-beige, reddish-beige, colour. In conclusion, these three species, belonging anyway to other sections, have an aniseed smell too, but they lack of green in the pigmentation of the cap.