The species is native to Cuba where it grows, with a quite limited number of specimens, in the south-eastern coast in the province of Guantanamo only on a hill characterized by low vegetation mainly xerophilous. The soil, almost without humus, is formed by calcareous rocks subject to erosion phenomena of karstic type. The climate of the zone stands among the warmest and driest ones of the island, with high temperatures almost constant during the whole year and low rainfall concentrated in 2-3 months partly mitigated by moist sea breezes coming up from the nearby coast. 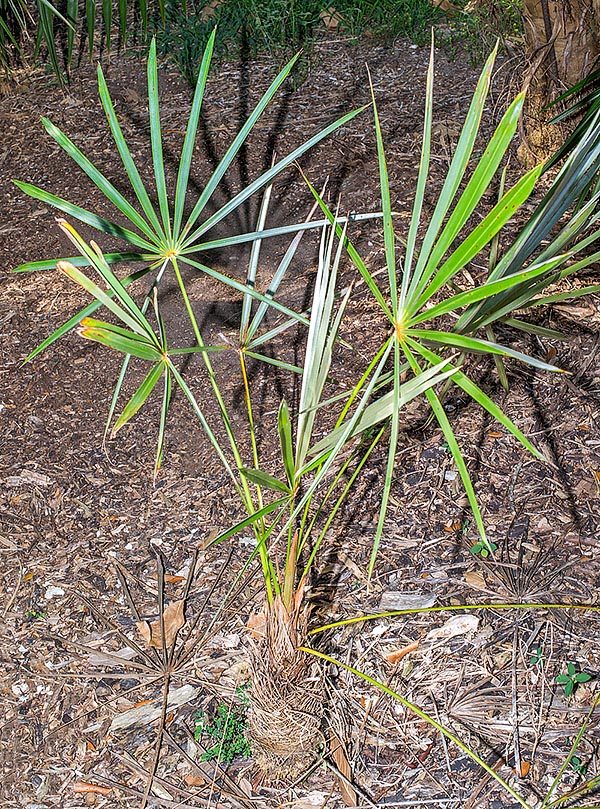 Young specimen of Coccothrinax torrida. This palm, rare in nature, grows in the warmest and driest zone of Cuba contenting of few rainfalls and calcareous soils almost without humus © Giuseppe Mazza

The generic name comes from the combination of the Greek term “κόκκος” (coccos) = berry and the name of the genus  Thrinax, to which these plants resemble; the specific name is the Latin adjective “torridus, a, um” = torrid, parched, with reference to the particular climate of the origin area.

The Coccothrinax torrida Morici & Verdecia (2006) is an unarmed monoecious species with solitary stem, erect, 2-8 m tall and of 3-4,5 cm of diameter, of greyish colour, often with a mass of exposed roots at the base and hidden in the upper part, for a more or less long stretch, by the persistent dry leaves.

The leaves, on a 20-30 cm long and 0,5-1 cm broad petiole, usually little more than semicircular, above of grey green colour and irregularly covered by a whitish waxy patina, below green with a deciduous silvery grey tomentum. The foliar lamina is deeply incised, almost up to the base, in 16-19 rigid linear-triangular segments, 24-30 cm long at the centre; the hastula (appendage placed in the insertion point of the foliar lamina with the petiole), little prominent, is triangular and of yellow colour. The foliar base, 20-30 cm long, is equipped at the margins of straw-yellow fibers, of 0,5-3,5 mm of thickness, initially united at the apex to form a typical triangular flap with acuminate apex, that later on breaks up with the development of the leaves.

The fruits are globose, of 0,5-0,6 cm of diameter, of initially green colour, then when ripe cream white instead of blackish purple, particularity shared in the genus with the Coccothrinax montana Burret (1929), containing only one cerebriform seed of 0,3-0,5 cm of diameter.

It reproduces by seed, put in perfectly drained and aerated loam maintained slightly humid at the temperature of 28-30 °C, with germination times starting from 5-6 months and slow growth.

Species among the most particular of the genus, depending on the microclimatic characteristics and the soil of the origin area, that furnish useful indications of cultivation, as never having left its narrow confines before its description and collection of the seeds, immediately distributed to gardens and botanical institutions. The most suitable environment appears to be that of the tropical and subtropical climate regions with a marked dry season, in full sun on calcareous rocky soils, even if poor, and with a very good draining power. Subject in nature to the sea breezes, it can be advantageously utilized in “desert” gardens close to the sea. No particular uses are known by the local population.