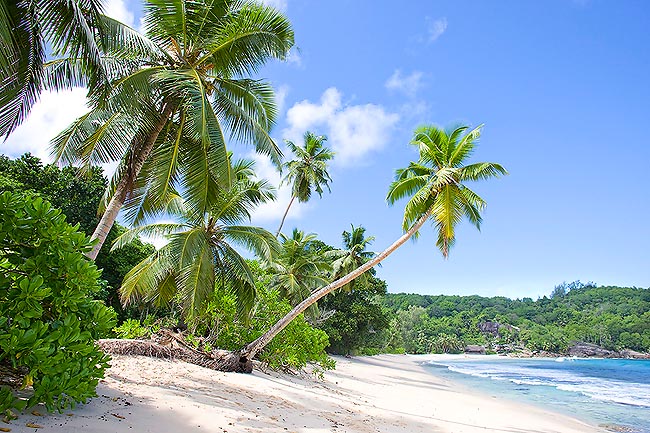 The exact derivation of the name of the genus is unknown, some derive it from the Spanish “coco” (ghost, imp), others from the Portuguese corruption of the native name of a monkey.

In both cases, due to the presence on the “nut” of the three germinating pores, which recall the figure of a head.

The name of the species “nucifera”, means carrier of nuts.

The location of origin is not known.

The most accredited hypothesis is that the Cocos nucifera L. (1753) is native to the Asiatic sub-continent, even if many are those who believe it as native to the coasts of Brazil, where, however, it might have been carried by the Portuguese, the same who, as historically ascertained, introduced it, around the 1500, in western Africa.

Presently, it is probably the most spread palm in all the tropical areas. Propagation happened both by means of the man, seen its great economic importance, and, of course, by the floating capacity of the seed, keeping for long time its germinative capacity, and that of growing on sandy coasts. 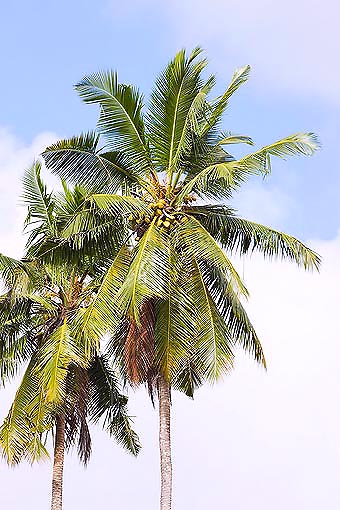 Cocos nucifera is the most common tropical palm © Mazza

It is impossible to relate all the names under which it is currently known in the various parts of the world.

Single trunk palm, erect or curved, of 30-40 cm of diameter in the median part, more or less enlarged at the base, tall up to more of 20 metres, of brown-grey colour, irregularly marked by the scars of the foliar petioles.

Monoecious plant, it produces between the leaves one more than one metre long inflorescence, much ramified, which comes out from a woody spathe, the little flowers are of a pale yellow colour.

The fruits are approximately ovoidal, long up to 25 centimetres, of green, yellow or brown, colour, depending on the variety, when ripe. Many varieties are known in the interior of two typologies which refer to the height: “Talls” and “”Dwarfs”.

The first ones are those more spread in the wild, and cultivated since more time, the second ones, selected in the most recent years, are meeting with a remarkable success, especially as ornamental plants. It is an early blooming palm, as this can start already at the age of 5-6 years (even 3 in the “Dwarfs”). 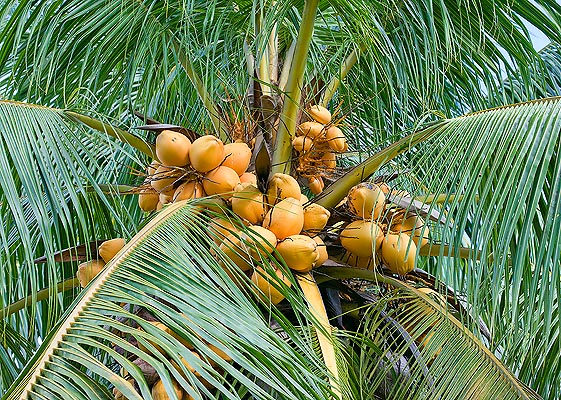 Cocos nucifera fruits are yellow, green or brown depending on the variety © Giuseppe Mazza

It multiplies by seed, which germinates from 1 to 5 months, depending on the variety and the temperature.

Palm of remarkable commercial value, due to the huge quantity of products which can be obtained from almost all its parts.

It has been, for centuries, even of vital importance for many native populations, especially those of the Pacific Ocean islands, where the survival was depending, mainly, from it.

It grows up preferably in the coastal areas of the wet-humid tropical and sub-tropical zones, in deep and sandy soils.

Its importance under the ornamental point of view, as well known, is not lesser to the commercial one, it’s the plant which, more than any other, evokes the tropical landscapes in the collective imagination.