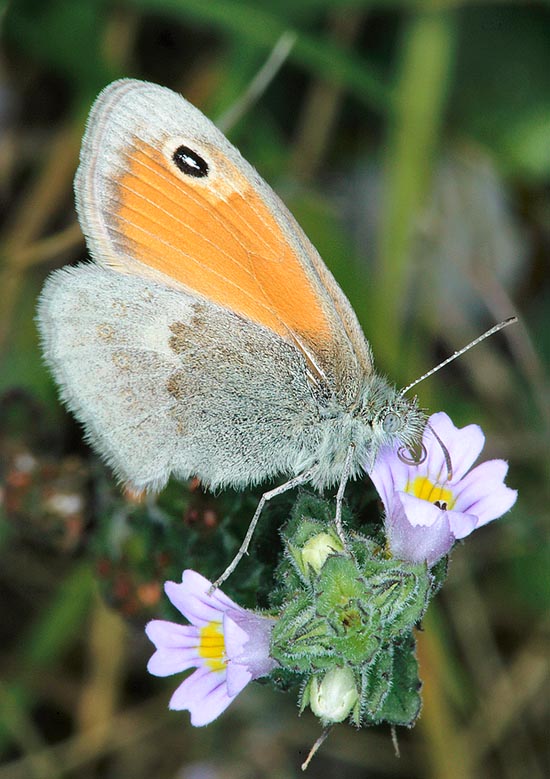 The Small heath (Coenonympha pamphilus Linnaeus, 1758) is the smallest Coenonympha and by sure the most common of them.

It is a very common butterfly in the cool-temperate area and it can be seen flying untiringly on all meadows even if never in large number but constantly present in every corner. Furthermore, having numerous generations, its presence is as a consequence constant from March to late October.

It is a small butterfly insignificant in itself but cheers up our countries flying constantly even in adverse weather conditions. It easily stands temperatures rather cool and considered as unsuitable for the flight of a butterfly and this renders it unique in our habitat.

Le Coenonympha are present in Europe with about a dozen of species which at times overlap their range but having usually as characteristic a different habitat besides, of course, a different morphology.

The etymology of the scientific name Coenonympha comes from the Greek “koinos” = in common, and “numphe” = nymph, to indicate a genus bringing together many species widely diffused; the name of the species pamphilus recalls one of Aegyptus’ 50 sons. “Pamphilus” was very used as proper noun by the Romans to indicate somebody loved by all, from the Greek “pan” = all and “philos” = loved, dear. Name derived to Italians as Panfilo. It is possible that this second version has been kept in mind by Linnaeus during the first classification.

Here are some European common names: Small heath, in English; Kleine Wesenvogelchen, in German; Fadet commun or Procris, in French; Kamgrasfjaril, in Swedish; Hooibeestjie, in Dutch.

Species widely diffused in Europe, occupies with various subspecies a vast area that reaches up to cover most of Asia. In North Africa, is frequent in the western part of the Mediterranean area and in North Europe occupies extensively all Scandinavian Peninsula.

We find it from the sea level up to 2000 m, altitude it reaches easily during its continuous wandering, but only in the southern areas of its range.

It has no difficulty in living in habitats with adverse weather conditions, but is invariably conditioned by the presence of prairies of graminaceous plants of the genus Poa, Festuca and Agrostis which result essential for its survival. In reduced number and accidentally, they may be found also on sandy grounds having no herbaceous vegetation but it is thought that these are specimens in simple movement from an area to another of their traditional habitat. In some areas of the United Kingdom, this butterfly is in strong decline even if no upheavals in the frequented habitat have occurred. Extensive studies are presently under way for understanding the reason. 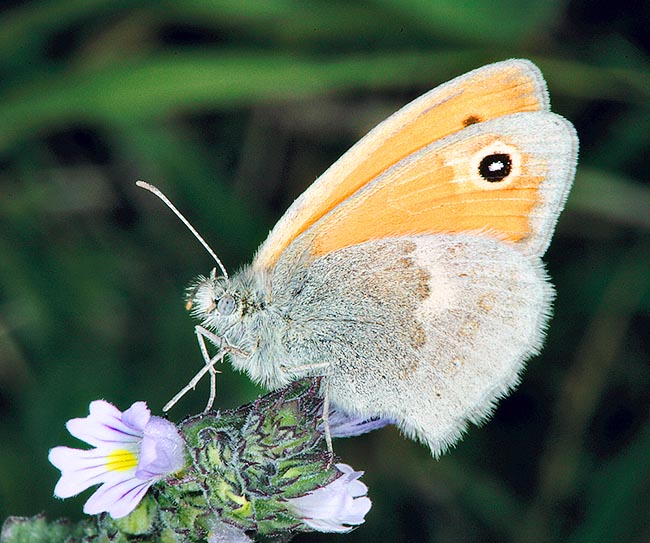 The smallest of the genus with about 30 mm of wingspan. Even 4 generations per year according to climate © Giuseppe Mazza

The small heath is a tiny butterfly just exceeding the 30 mm of wingspan, uniformly of dull orange colour with a slight streaking on the lower page of the wings.

The upper face is uniformly of the same colour, with a slight darker border on the margins of both wings. The fore wing has a very small dark point in the post-discal area close to the coast that manifests more clearly on the relevant lower face, with a black ocellus edged in yellow and with a small bright white small point at the centre. The lower page of the rear wing results much darker than the fore one and is crossed by a yellowish belt placed in the port-discal area.

As typical in the classification of insects living in very vast areas, also in the small heath have been determined many subspecies usually referred to the different inhabited areas and habitats.

It is a butterfly continuously moving with a flight slow and rather hoppy. When two males meet, they start an antagonist pursuit with a rapid and zigzagging flight leading them at remarkable height from the ground and then abandon the pursuit and go back to the traditional dance on the grassy lawns. The female, on the contrary, prefers to fly hugging the ground smartly moving among the long stalks of the grassy prairies. Particular of the Coenonympha is the fact that this butterfly, when perching, never shows the upper face of the wings, but keeps them folded vertically on the body, carrying instinctively the lower page towards the sun and inclining the body in way to enjoy the maximum insolation.

In particular favourable habitats and in optimal climatic situations, this butterfly may have even four generations per year. The abundance of the host essences and the strong resistance to the climatic conditions of this small butterfly are surely the conditions placing this insect among those most diffused in our continent. It is a butterfly already visible by the end of March, when the vegetative lushness has not yet started but, nevertheless, this lepidopteran is able in short time, to come to life, spawn and begin a new cycle. In fact, the hibernating caterpillars reach shortly the maturity and after a quick period as chrysalis that may last even only a dozen of days, we have a butterfly immediately ready to produce a new generation.

It spawns directly on the dried stalk of the host plant or also on different plants but always next to these ones, in small clusters usually with a small number of eggs even if very often prefers to lay them singly on each support. The eggs, very small, are initially pale green and then become, shortly, of the same colour of the dried stalk. The caterpillars are pale green and difficult to find among the grass. Also the chrysalides are strongly camouflaged as having greenish hues and are placed suspended head down on the stalks but normally at the level of the soil. The main host plants are of the genera Festuca, Poa, Anthoxanthum and Agrostis.