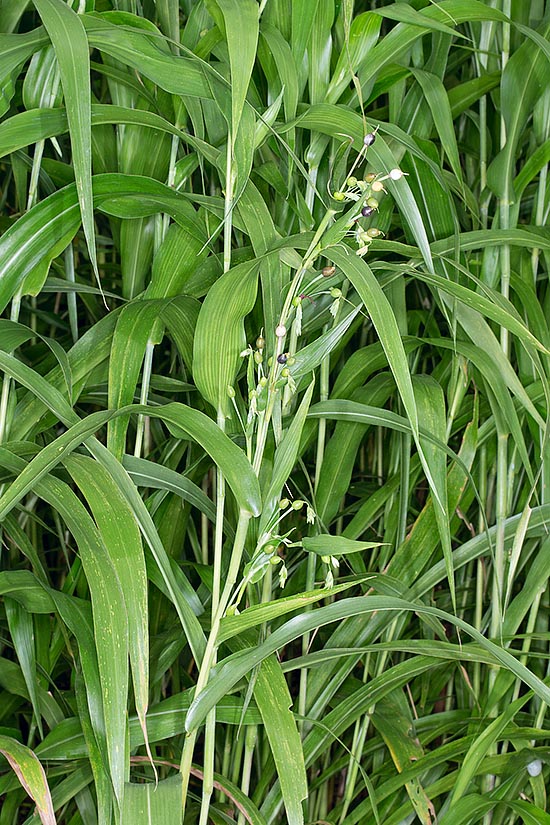 The name of the genus has Greek origin and appears in Theophrasthus’ works (IV-III century BC) attributed to a palm; the specific name is the combination of the Latin substantive “lacryma” = teardrop and of the name of the biblical Job, therefore “Job’s tear” with reference to the shape of the utriculus, sac containing the fruits.

The Coix lacryma-jobi L. (1753) is a perennial, but often cultivated as annual, herbaceous species, with robust erect stems (culms), ramified on top, 1-3 m tall, and simple leaves, alternate, linear-lanceolate with pointed apex and rough edges, 10-60 cm long and 2-7 cm broad, with leaf sheath surrounding the culms shorter than the internodes.

Inflorescences numerous at the upper axils of the leaves, erect or drooping, about 8 cm long, subtended by a globose involucre (modified leaf sheath), hard, called utriculus, formed by a sessile female raceme, inside the utriculus, and a male raceme protruding outside, 2-5 cm long, formed by imbricate spikelets, about 0,7 cm long, in pair with a terminal triad.

The pseudofruit, formed by the utriculus enclosing the caryopsis (indehiscent dry fruit typical to the family of the Poaceae), is ovoid, 0,5-1,2 cm long and 0,6-1 cm of diameter, glossy, white, bluish, pearl grey or black and usually of lapideous consistency; the caryopses are orbicular, ventrally furrowed, about 0,5 cm long. It easily self-disseminates becoming often invasive in favourable conditions.

It reproduces by seed in spring, in loam maintained constantly humid at the temperature of 22-24 °C, with times of germination of 2-4 weeks and vegetative cycle lasting usually 4 to 6 months; it may reproduce also by division. 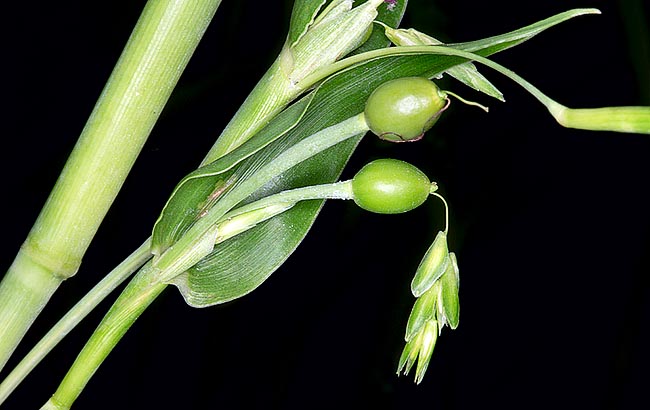 Close-up of inflorescence with male raceme, formed by imbricate spikelets, hanging from the utriculus © G. Mazza

Species cultivated since remote times in the origin countries and diffused, often naturalizing, in different tropical and subtropical countries, requires an exposition in full sun or slight shade and is not particular about the soils, even poor, but the fructification is more abundant in the fertile ones, slightly acidic to slightly alkaline maintained humid; it bears water stagnations, but not long drought periods.

Out from the tropical and subtropical climate zones is treated as annual. In spite of the excellent nutritional characteristics, due to the particular hardness of the pseudofruit is cultivated as cereal only in remarkably less extent than the rice and the corn, but mainly as fodder plant, ornamental and especially as medicinal, in China in particular, where it holds a long tradition of employment for various pathologies.

Laboratory studies have confirmed the presence of numerous bioactive substance that may have antioxidant, antinflammatory, hypolipidemic and anticancer effects, that need further researches for a possible employment in the official pharmacopoeia. Only the varieties with softer involucre, easy to remove the shell, among which the most diffused is the Coix lacryma-jobi var. ma-yuen (Rom.Caill.) Stapf (1896) are utilized as nourishment.

The caryopses, that present a contents of proteins particularly high and do not cointain gluten, may be consumed raw, but are usually dried or roasted and consumed boiled, in lieu of the rice, or reduced in flour to prepare various dishes, with addition of wheat or other cereal flour to give consistency to the dough, seen the absence of gluten. From the fermented caryopses they get also several alcoholic drinks. 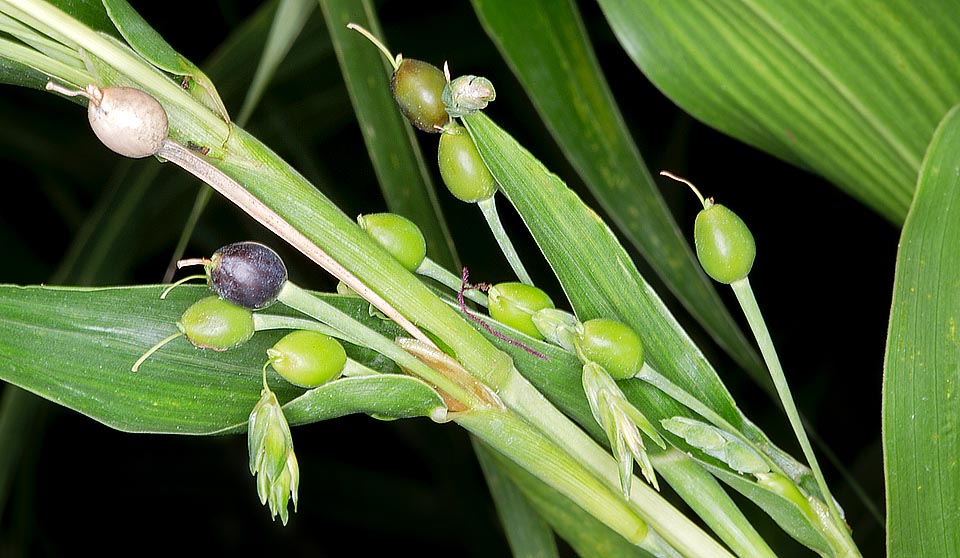 Pseudofruits at various phases of ripening. Note, inter alia, the reddish stigma getting out from an utriculus. Like wheat, produces edible caryopses. Medicinal virtues © Giuseppe Mazza

In the varieties with involucre having lapideous consistency and very long duration, the pseudofruits are utilized for ornamental purposes, to realize rosaries, necklaces, curtains, bags, decorations in general and other handicrafts, being holed from side to side. Finally, is not to be ignored the ornamental look of the plant in its whole, in fact it is often utilized in parks and gardens in group or to form borders, even mixed.