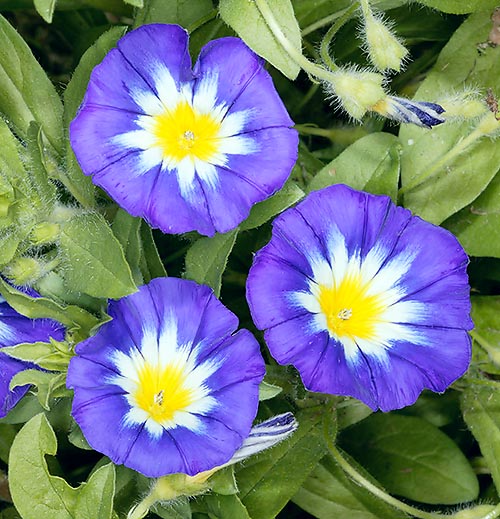 The plant is native to Africa (Algeria, Libya, Morocco and Tunisia) and of Europe (Bosnia, Croatia, France, Greece, Italy, Portugal, Slovenia and Spain), where it grows mainly along the coast line on clayey soils.

The name of the genus comes from the Latin verb “convolvere” = to wrap, with reference to the voluble stems of many plants belonging to the genus; the name of the species is the combination of the Latin words “tres” = three, and “color” = colour, with obvious reference.

The Convolvulus tricolor L. (1753) is an annual, or short lasting perennial in the particularly mild climates, herbaceous plant with much ramified stems, creeping initially, then ascending up to 20-40 cm of height, pubescent like the 3-4 cm long and spirally placed leaves. The basal leaves are ovate on a short petiole; the upper ones are sessile (without petiole) and lanceolate or spatulate.

The flowers are solitary on a long peduncle, funnel-shaped, with a 3-4 cm of diameter corolla, yellow in the centre, shading to the white, then to light or intense blue along the margin; the flowers last one day only, they open early in the morning and close in the afternoon, but are continuously produced.

The fruits are tomentose capsules containing about 3 mm long and pale brown seeds. It reproduces by seed in spring, to be kept 24 hours in water in order to speed up the times of germination (averagely one-two weeks), in which case it blooms starting from July; in the mild climate zones it may be sown also in autumn, directly on the spot, with blooming starting in May.
It easily self-disseminates. 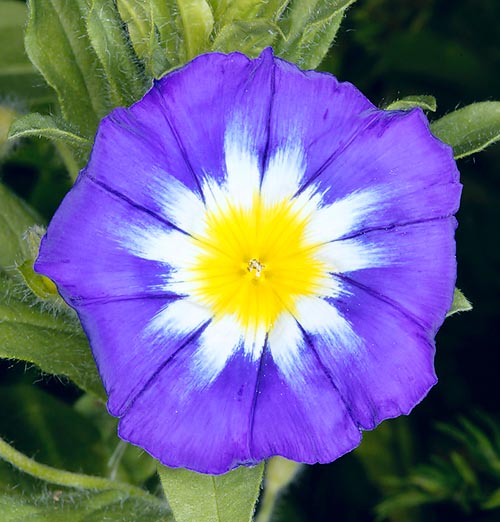 Native to the Mediterranean area, is utilized, since the end of ‘700, for its abundant and long lasting flowering and the intense colours of the flowers, as ornamental plant, especially in the gardens of North Europe and England, and has reached the greatest diffusion all along the ‘800.

Numerous varieties have been selected since then, with more compact appearance, larger flowers, up to 5 cm, and more, of diameter, and various shades of colours which have ousted the botanical species and which, still now, despite the competition of countless species introduced in cultivation coming from other continents, are utilized in rock gardens, in edges and as soil covers.

The exposition must be in full sun, seen that when in the shade the flowers do not open, whilst it is absolutely not demanding for what the soil is concerned, as the same may be also poor. Watering must be regular, even if, once well rooted, it may stand, as happens in the wild, dry periods. Usually, by late summer, the blooming begins to lessen, but if it is low pruned, it grows again quickly and resumes blooming abundantly till the beginning of the cold weather.

It may be cultivated in pot, utilizing a mix of 2/3 of normal topsoil and 1/3 of sand or agri-perlite for improving the drainage, with more frequent watering in summer, but always leaving the upper layer of the mould to dry up before irrigating again. Due to its posture, it may be utilized as drooping also in suspended pots.