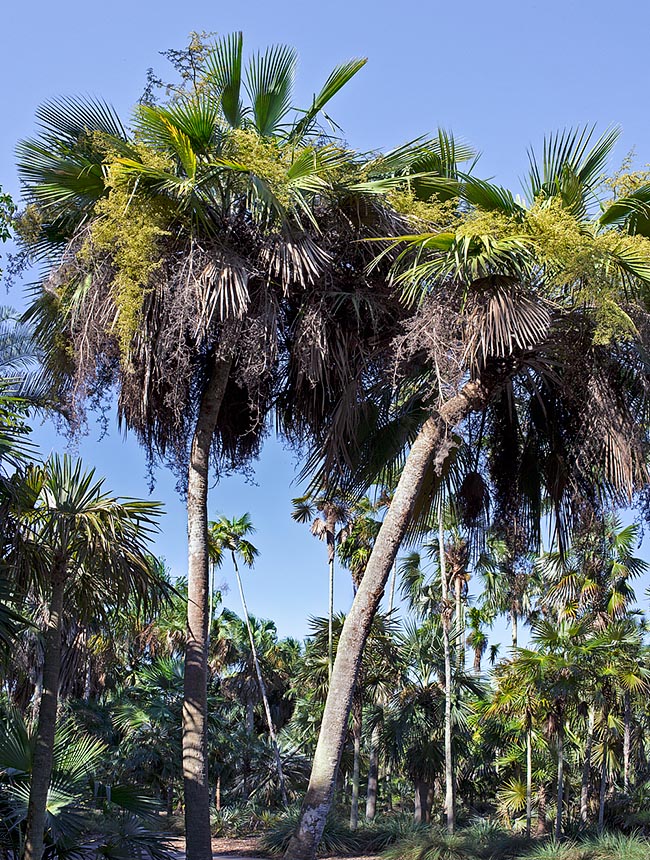 Endemic to Cuba, Copernicia glabrescens is a slow growing species that may reach the height of 7 m © G. Mazza

The species is endemic to Cuba where it grows in the central-western provinces of Habana, Matanzas and Pinar del Río in the savannahs and in the costal forests at low altitude.

The genus is honoured to the Polish astronomer Nicolaus Copernicus (1473-1543); the specific name is the present participle of the Latin verb “glabresco” = to become glabrous, hairless, with reference to the absence of hairs on the ramifications of the inflorescences, characteristic that distinguishes it from the strictly related to the Copernicia hospita.

Copernicia glabrescens H.Wendl. ex Becc. (1908) is an erect monoecious species, solitary or moderately cespitose, in nature up to 5-7 m tall, with cylindrical stem, of 15-18 cm of diameter, of greyish colour partially covered by the persistent foliar bases.

The leaves, on a petiole provided at the margins of robust spines, up to about 1 cm long and 3 cm broad, are palmate, almost circular of about 0,8 m of diameter, of green colour above, covered by a slight waxy patina below.

The foliar lamina is incised in about 60 linear-triangular segments with acuminate apex, rigid, united at the base per about 1/3 of their length. Inflorescences among the leaves (interfoliar) that project well outside the foliage, up to about 3 m long, with 6 orders of ramifications and rachillae, 0,5-1,5 cm long, glabrous, bearing tiny close hermaphroditic flowers, usually solitary, less frequently coupled, fragrant, with trilobed tubular corolla, glabrous or pubescent, 3 carpels and 6 stamina with the wide filaments merged at the base; after the ripening of the fruits the inflorescences persist for long time on the plant granting a quite messy look. The fruits, that develop usually from only one carpel, are globose, of about 1,8 cm of diameter, black when ripe, containing only one globose seed of about 1,3 cm of diameter.

It reproduces by seed, previously kept in water for two-three days, in draining sandy loam maintained humid at the temperature of 26-28 °C, with germination times starting from one month. Slow-growing species little known outside its origin zones, similar to the the better known Copernicia hospita from which differs, besides the particular of the inflorescences cited above, for the leaves, green instead of glaucous and densely waxy. 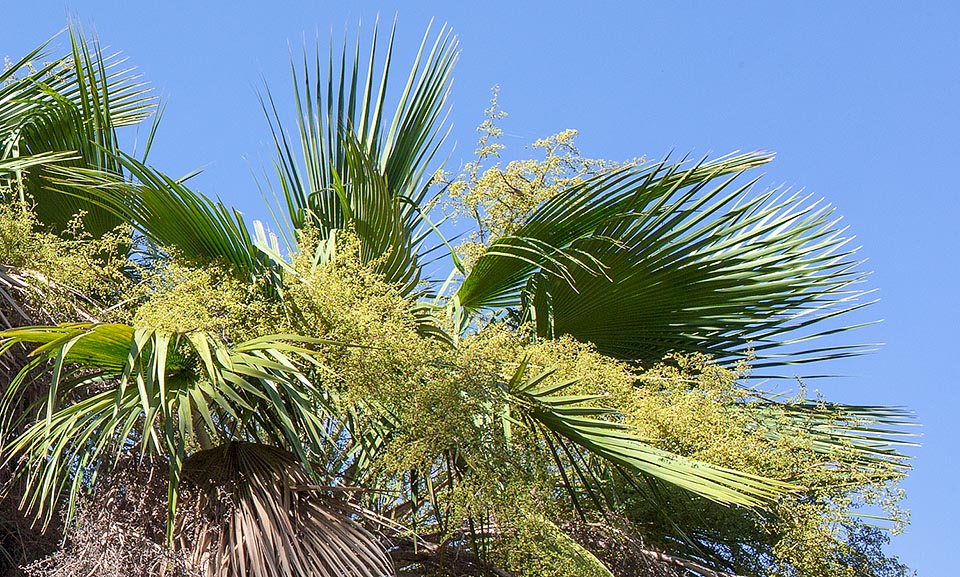 The inflorescences, about 3 m long, have a dense ramification with countless tiny hermaphroditic flowers. It resists to short and occasional thermal drops up to -3 °C © Giuseppe Mazza

Cultivable in the tropical, subtropical and temperate-warm climate zones, where when adult can stand occasional and short-lasting drops in temperature up to about -3 °C, with possible damage of the foliage. Requires full sun since the first stages of the growth and draining soils, even poor, provided constantly humid, neutral to slightly alkaline, well rooted may resist to drought periods, but grows best in soils maintained almost constantly humid, therefore is to be regularly watered in the zones characterized by long warm and dry summers. The fertilizations with products balanced with slow releasing microelements contribute in giving it a more lush appearance. It has proved to be moderately tolerant to the saline aerosols, hence can be employed in gardens close to the sea.

The dried leaves are locally utilized as cover of rural dwellings and for realizing various common use handicrafts, the stems in the buildings.