The species is endemic to Cuba where it grows in the central-eastern part of the island in the open forests and savannahs close to the coast at low altitude.

The genus is dedicated to the Polish astronomer Nicolaus Copernicus (1473-1543); the specific name is the Latin adjective “rigidus, a, um” = rigid, with reference to the foliar segments.

The Copernicia rigida Britton & P.Wilson (1914) is a monoecious species, erect, solitary, up to about 15 m tall, with cylindrical stem, of 25-35 cm of diameter, of grey colour and covered under the top by a mass of dry leaves persistent for long time. 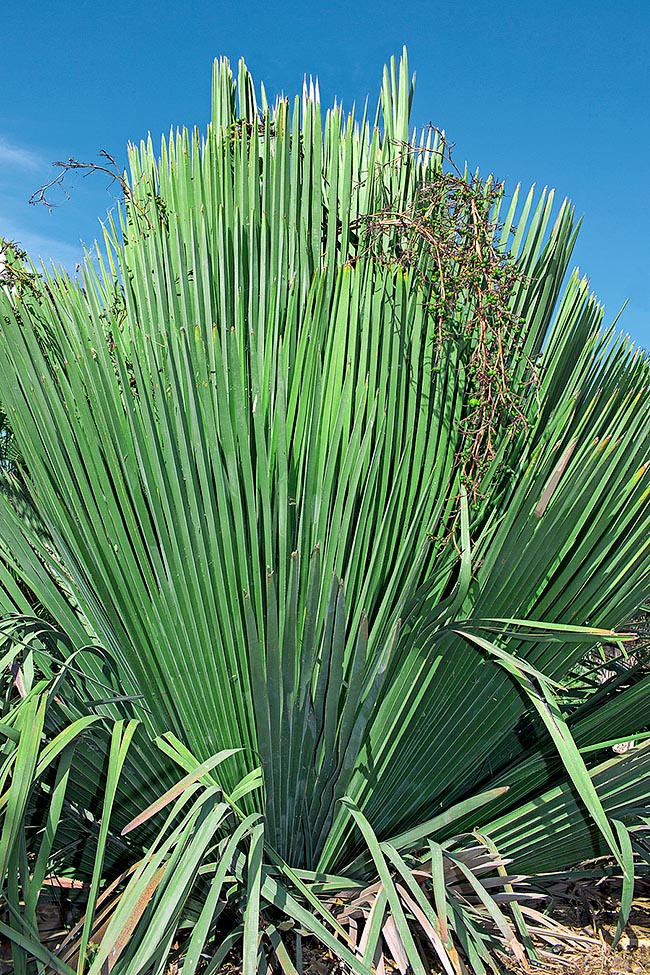 Young plants of Copernicia rigida, native to Cuba, seem to get out from soil, due to the leaves almost without petiole © Giuseppe Mazza

The leave, with no petiole or almost, are palmate, cuneiform, erect, provided of spines curved at the margins, of green colour above, with a thin waxy grey patina below. Ligule, appendage to the foliar sheath opposite to the leaf, of ovate to linguiform shape and of variable length, up to 1 m, provided with sparse spines on the margins. The foliar lamina is incised in 18-40 linear segments with just bifid acuminate apex, in the central part up to 2 m long and 3-4 cm broad, united at the base for about 2/3 of their length. Inflorescences between the leaves (interfoliar), 2-2,5 m long, with 6 orders of ramifications and floriferous rachillae, covered by short and thick hairs, 4-9 cm long.

Sessile hermaphroditic flowers in close groups of 2-4, 2,5-3 mm long, with trilobed tubular corolla pubescent externally, 3 carpes and 6 stamina with the wide filaments united at the base. The fruits are globose, of about 1,8 cm of diameter, black when ripe, containing only one globose seed of about 1,2 cm of diameter.

It reproduces by seed, previously kept in water for two-three days, in draining sandy loam maintained humid at the temperature of 26-28 °C, with germination times starting from 2-3 months.

Rarely present outside the origin zone, possibly due to its remarkably slow growth, it’s one of the most singular palms due to the look it assumes during the various stages of life, long and leaning one against the other due to the almost total absence of petiole, in particular in the juvenile phase, when the leaves see to get out from the soil.

Cultivable in the tropical and subtropical climate regions, its cultivation may be tried in the mildest warm temperate ones where temperatures close to 0 °C are short lasting exceptions. It requires full sun and is not particular about the soil, provided draining, can stand drought periods, but it is preferable to irrigate it regularly in the regions with long warm and dry summers, for a relatively faster growth. For the same purpose are useful the fertilizations with balanced products with microelements under form of chelates. It can be advantageously utilized close to the sea thanks to its good resistance to the soils and the saline aerosols.

The leaves are employed as cover of rural dwellings and for realizing hats, bags, baskets, brooms and others common use handicrafts; the stems, resistant and lasting, even if immersed in water, are employed in constructions and for fences.