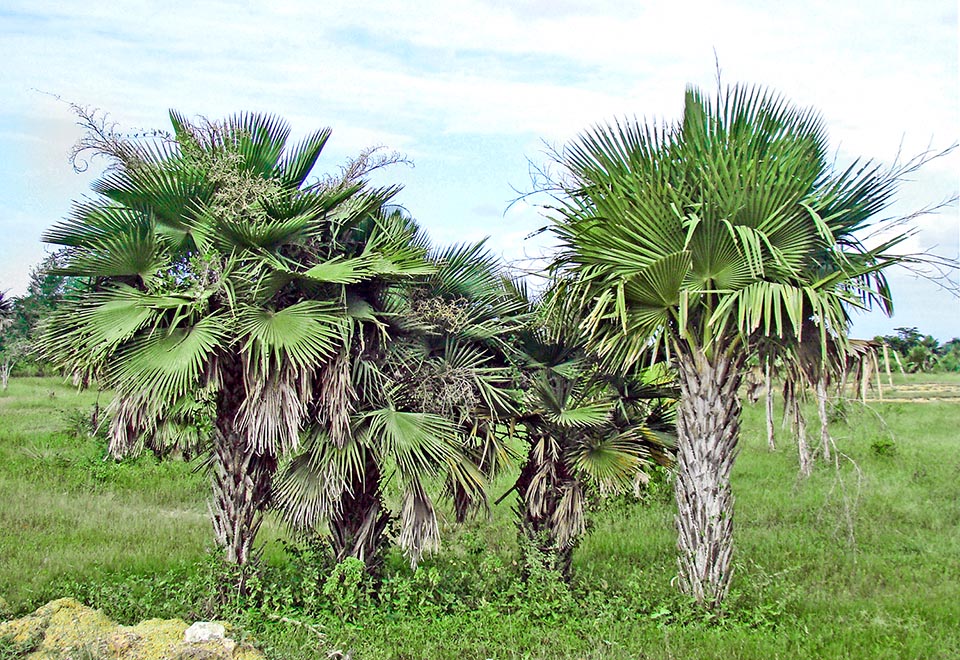 Endemic to Cuba, Copernicia roigii is a rare palm growing on sandy soils alkaline or formed by a mix of sand and of clay © Duanny Suárez

Copernicia roigii Leon (1931) is endemic to Cuba, in the central province of Matanzas and in the oriental ones of Las Tunas and Santiago. It is distributed in the forests or in the evergreen macchia, on soils formed by alkaline sands or by sand mixed with clay.

Copernicia roigii is a monoecious species with solitary cylindrical stem up to 10 m tall, with a maximum diametre of 18 cm, covered by the old hanging leaves that remain for a long time and once fallen leave the surface smooth and of pale grey colour.

The foliar crown presents a circumference of about 3,5 m and appears expanded due to the long petioles having no sheath that can measure even 80 cm. 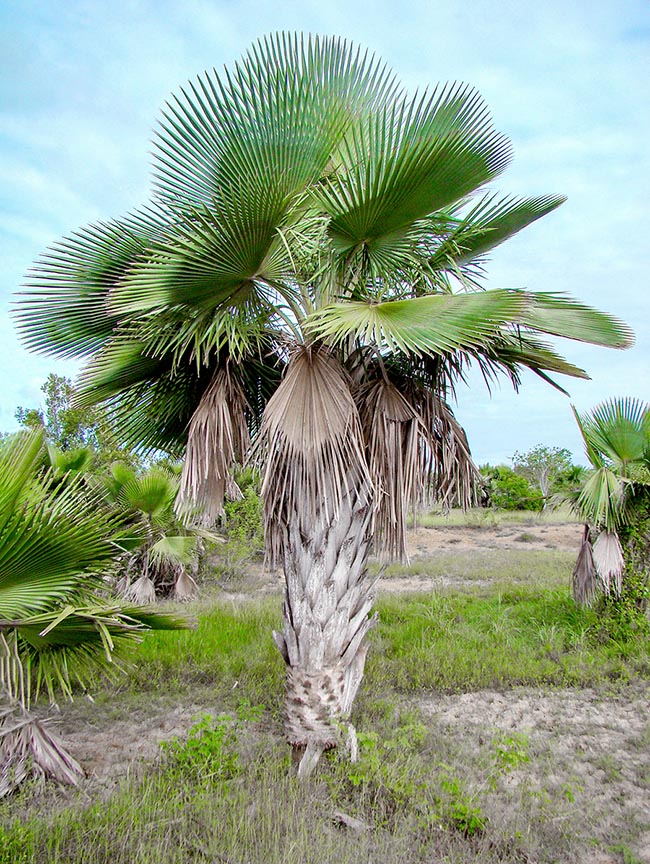 Monoecious species, with cylindrical solitary stem up to 10 m tall, keeps for a long time the rests of the petioles © Duanny Suárez

The petioles are broader at the base, where they reach 9 cm, than towards the apex, where they measure about 3 cm. On both the margins are equipped with a row of dark thorns of different sizes from each other.

In the point of junction between petiole and lamina is present above a rigid vertical small tongue of oval shape with wavy margin, 1-2 cm tall, whilst below the petiole continues in the lamina for some cm, giving the lamina the costapalmate shape.

In the juvenile form the leaves have a wedge-shaped profile but when the plant reaches maturity they become orbicular.

The lamina is rigid and coriaceous and is divided for more then half in segments, in a maximum number of 76, with the unarmed margins and pointed apex bifid at times. The central segment may even reach the length of 1 m. The colour of the lamina varies from glaucous green to whitish green depending on the quantity of wax covering its surface.

Most of the specimens have the leaves abundantly covered by wax.

The inflorescences are interfoliar, curved, and continue beyond the leaves. They are very ramified and tomentose, more than 2 m long and hanging on the stem. They have tubular bracts that carry hermaphrodite flowers of cream colour, 3 to 3,5 cm long, solitary or in groups of two, spaced 1 mm, with the corolla densely covered by down.

The fruits are produced in great abundance and are roundish, 14 mm long and 13 mm broad, yellow/blackish when ripe. They contain only one, about 10 mm long, ovoid seed.

It reproduces by seed kept in water for two-three days, in sandy loam maintained humid at the temperature of 26-28 °C, with germination times of 1-3 months.

Copernicia roigii is a very little-known palm in cultivation outside the island of Cuba and can be admired only young specimens in a few botanical orchards and private collections. It would deserve a greater diffusion due to its elegant looks, the silvery colour of the leaves and the rather contained dimensions in respect to other species of the genus Copernicia, characteristics that would render it cultivable in medium-sized gardens.

Slow-growing palm can be cultivated in an ample variety of climate zones, from the tropical to the warm temperate ones, where, when adult, could bear even temperatures around the 0 °C for short periods. It loves the expositions in full sun, in mainly sandy and very well-draining soils, being particularly sensitive to water stagnation at the roots, especially if associated with relatively low temperatures. When adult it can stand long drought periods. 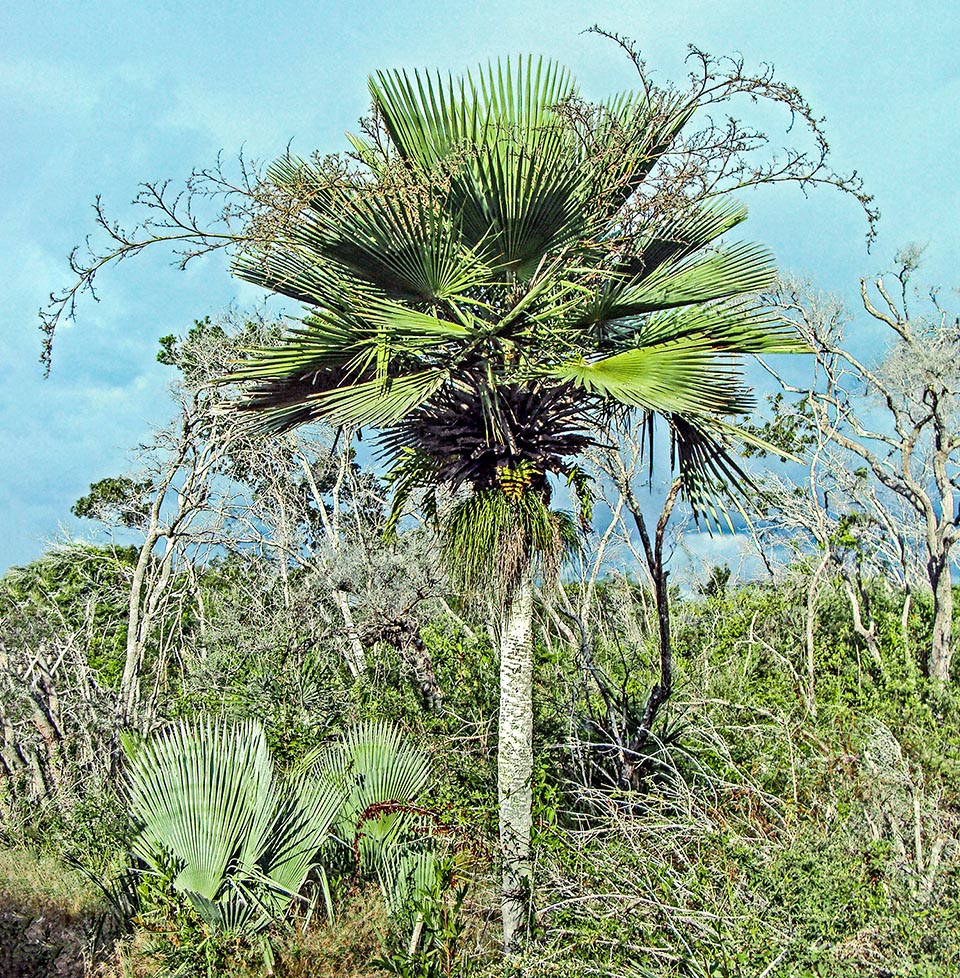 When they fall, they leave, like in this case, the trunk smooth. The profile of the leaves, wedge-shaped in young plants below left, gets then orbicular. The interfoliar inflorescences, very ramified and tomentose, exceed 2 m and hang on the plant sides. Very slow growing palm, could be cultivated in a great variety of climate zones © Duanny Suárez

It has many similarities with the congener Copernicia yarey, of which it is thought may represent a variety, but the studies conducted so far have not yet led to the unification of the two species.

The populations of the origin provinces utilize the stems of the palms as supports for the constructions of the houses and as posts for the fences of the lands.

Copernicia roigii is an endangered species due to the fragmented distribution in territories isolated by the expansion of the agricultural cultivations and the traditional use of the stems of palm in the construction techniques.

There are no recognized synonyms for this species.