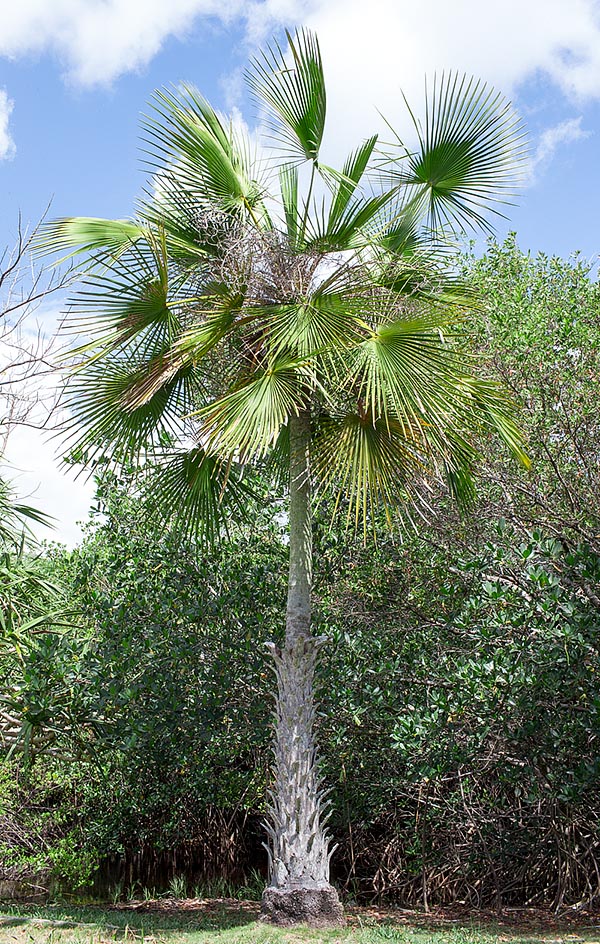 Native to the savannahs with long dry season of Colombia and Venezuela, Copernicia tectorum is a monoecious species, erect, solitary, 8-10 m tall, with stems of 25-30 cm of diameter © Giuseppe Mazza

The species is native to Colombia (Atlántico, Cesar, La Guajira y Magdalena) and of Venezuela (Bolívar, Cojedes, Guárico, Portuguesa and Zulia) where it forms extensive woods in the savannahs (llanos) characterized by a markedly seasonal climate, with a long dry season, eventually exceeding the six months, and permanent floodings during the rain season.

The genus is dedicated to the Polish astronomer Nicolaus Copernicus (1473-1543); the specific name is the genitive plural of the Latin substanctive “tectum, i” = roof, with reference to the use of the leaves as cover of rural dwellings.

The Copernicia tectorum (Kunth) Mart. (1838) is a monoecious species, erect, solitary, 8-10 m tall, with cylindrical stem, of 25-30 cm of diameter, covered by the persistent foliar bases in the young plants, smooth and dark grey in the lower part in the adult ones, with at the base a mass of adventitious roots.

The leaves are palmate, orbicular, without spines at the margins and of green colour; the petiole, up to about 15 m long and 2 cm broad, is provided at the margins of robust curved spines up to 2 cm long. The foliar lamina is incised in about 40 linear segments with just bifid apex, long in the central part up to 1 m and 3 cm broad, united at the base for about 1/3 of their length.

Inflorescences between the leaves (interfoliar), about 1 m long, with 6 orders of ramifications and floriferous rachillae covered by short and thick hairs, up to 17 cm long.

Sessile close hermaphroditic flowers, solitary, of greenish white colour, about 3,5 mm long and 2,5 mm broad, with trilobed campanulate corolla pubescent externally, 3 carpels and 6 stamina with the wide filaments united at the base.

It reproduces by seed, previously kept in water for two-three days, in draining sandy loam maintained humid at the temperature of 26-28 °C, with times of germination starting from one month.

Almost unknown outside its origin zones, present almost exclusively in botanic gardens and in specialist collections, due to its adaptability to extreme climate and soil conditions, would deserve a bigger diffusion. 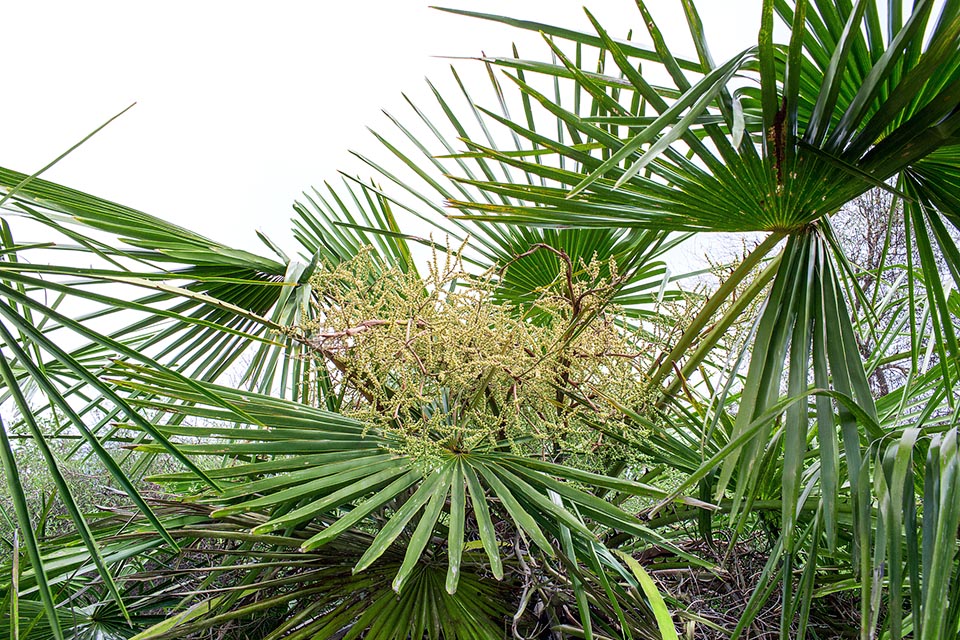 Interfoliar inflorescences, about 1 m long, with small sessile hermaphroditic close flowers, solitary, greenish white. The specific name comes from the fact that, as occurs in many palms, the natives used the leaves for the roofs of the rural dwellings. Little known and cultivated, would deserve a greater horticultural diffusion © Giuseppe Mazza

Cultivable exclusively in the tropical and subtropical climate regions, not standing temperatures close to 0 °C, in full sun on soils, even heavy, neutral to alkaline; it tolerates the long drought periods as well as the stagnant waters and resists to the frequent fires developing in the savannahs.

The dry leaves are employed as cover of rural dwellings and the fibers gotten from the not yet extended young ones for realizing hat, bags, baskets, mats and other common use handicrafts, important economic resource for some local populations; the stems, resistant and lasting, even if immersed in water, are employed in the constructions. The fruits, edible, but of rather unpleasant taste, are utilized in cattle feeding. The palm is the emblem of the Venezuelan state of Guárico.