Coris formosa (Bennett, 1830) belongs to the class of the Actinopterygii, the ray-finned fishes, to the order of the Perciformes and to the family of the Labridae.

The generic name Coris seems to be coming from the Greek “Κόρη” (kore) meaning maid, young girl, due to its slender and elegant look, with thin scales and the bright colours, images of beauty present in all species of this genus starting from the Mediterranean Coris julis, having, not by chance, the vulgar Italian name of Donzella (Damsel). The specific term formosa, from the Latin adjective “formósus, a, um” = beautifully shaped, nice, only reiterates the concept, and for the British this fish is the queen of the genus, seen the vulgar name “Queen coris”.

Present also in the Red Sea, Coris formosa is frequent along the coasts of the Indian Ocean, from Yemen and Somalia up to South Africa, and then in the Seychelles, the Maldives, Chagos Islands, India and Sri Lanka. 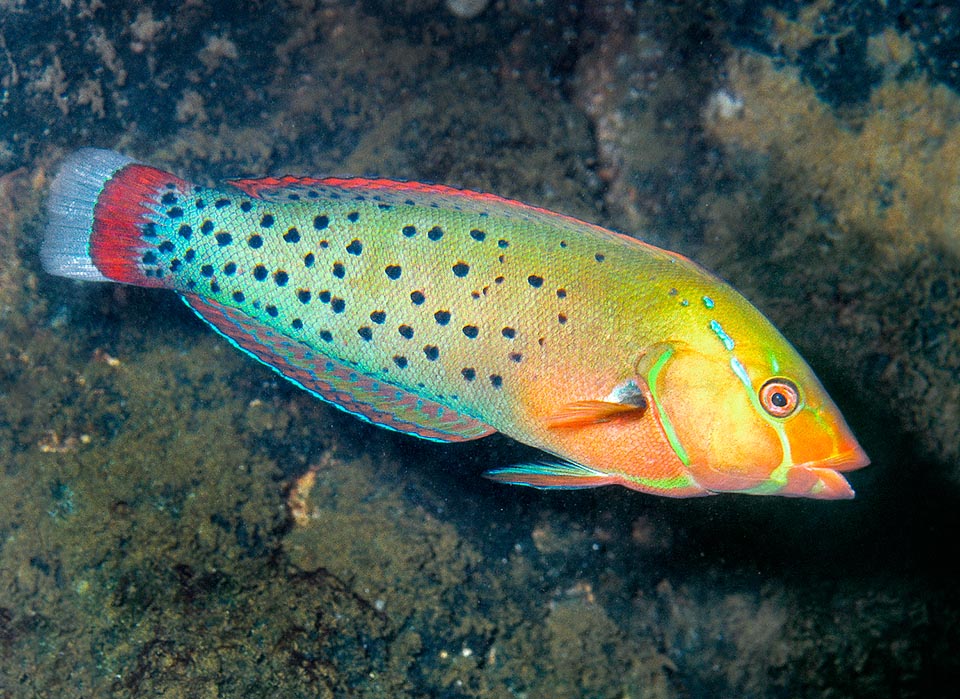 Present also in the Red Sea and most of Indian Ocean, Coris formosa, like many labryds, is a proterogynic hermaphrodite species, that is with females that growing can transform in males. The female livery, here shown, can be recognized at once from the vertical red band at the base of the caudal fin that ends then translucent © Mazza

It frequents the madreporic formations, between the 2 and the 50 m of depth, with waters at 24-27 °C, but also the rocky bottoms and the seagrass meadows. The juveniles often grow up in the cliff pools, where they wait for the high tide for moving.

The adult males may reach a length of 60 cm after unbelievable chromatic and morphological transformations.

At the beginning, the livery is quite similar to that of the Coris gaimard, the young are slender, orange red with 5 spots edged of black arranged like a saddle on the back. Then, growing, the edges of the body get dark and the flaming red dissolves tending to reddish brown.

In the adult livery, that has a strong sexual dimorphism, the body is tall, very compressed on the sides with roundish head. 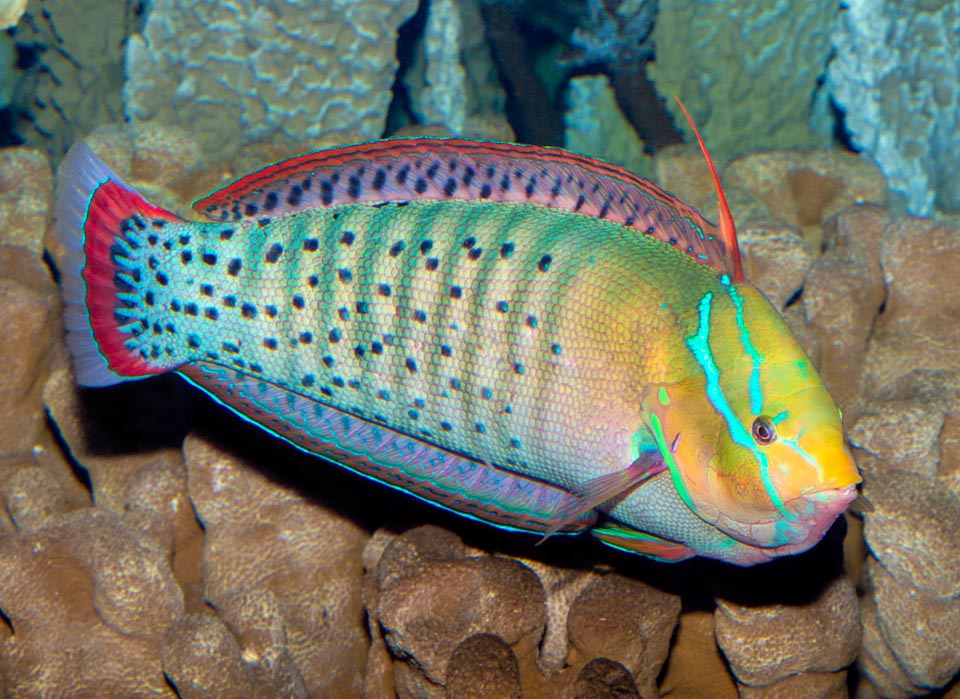 This is a big female in transition livery. The drawings on the head are more marked and we begin to see the vertical bands on the sides of the male livery © Giuseppe Mazza

The head and the first part of the body display a lively orange yellow colouration with a turquoise diagonal belt that starting from the throat flanks the eye to reach, with possible crosshatches, the beginning of the dorsal fin. Similar bands, less marked, are present on the margin of the operculum, between this and the beginning of the pelvic fin, and on the front. A typical pattern that we shall find emphasized in the males, which is not surprising at all, seen that this is a proterogynic hermaphrodite species, that is with females that while growing may transform in males. The second part of the body is dotted with black spots that get thicker towards the tail, on a greenish background colour that fades to turquoise in direction of the caudal peduncle. 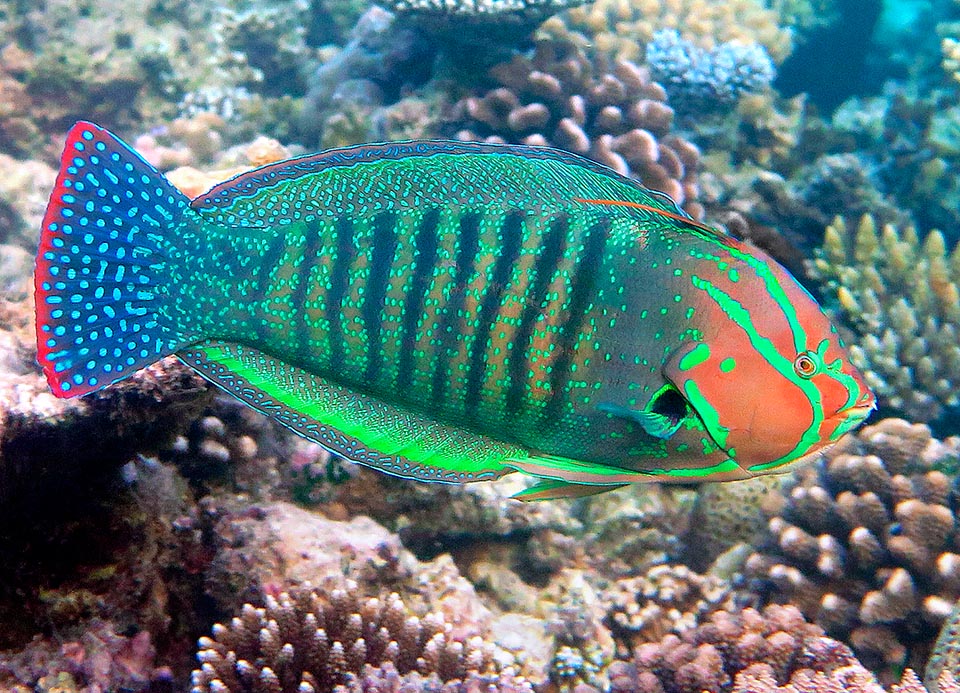 Male in nuptial livery. The drawing on the head is sharper, the background green with showy emerald strokes. The tail is totally different: dark blue with an elegant azure dotting and the edge bright red. The dominant males reach the 60 cm and hold one or more harems that they review during the reproductive time © Gianemilio Rusconi

The characteristic vertical red belt at the base of the caudal fin has disappeared. This has no more translucent parts: it’s all dark blue with an elegant azure dotting and bright red edge. On the sides the black spots have disappeared to leave the place to 9 dark vertical bands. The first long spiny ray of the dorsal is flaming and may raise threateningly.

The juvenile phases nourish of zooplankton, very small crustaceans and amphipods, but as soon as the solid incisors appear, the diet changes completely as the adults can break the armours of more substantial preys, such as sea urchins, crabs, gastropods and bivalves. 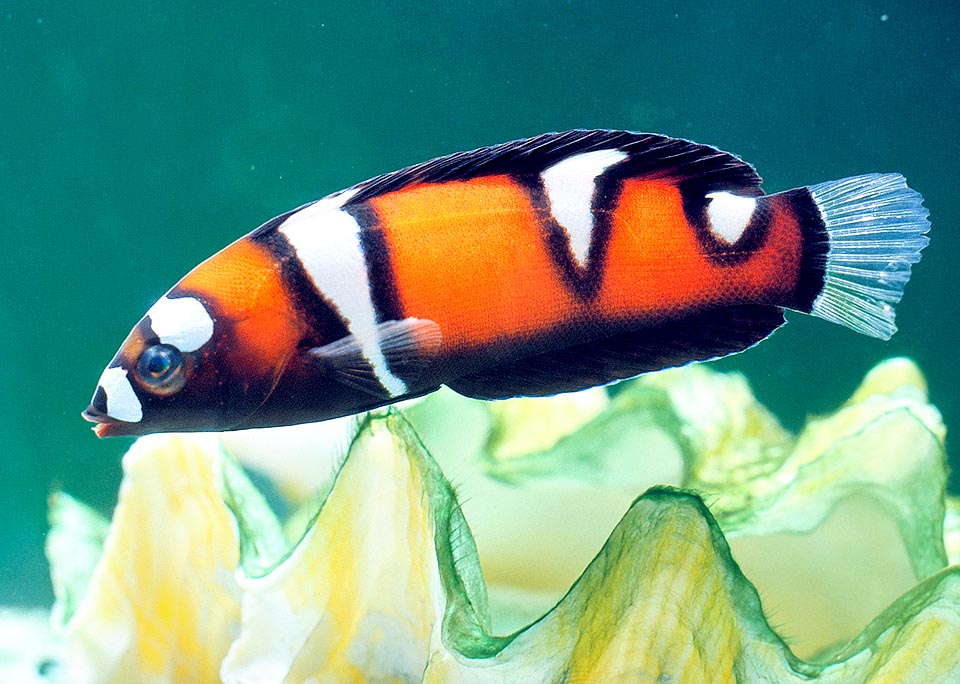 The livery of first young phase is orange-red with 5 showy white spots edged black arranged like a saddle on the back. Then, after the here shown phase, we get gradually to the female livery. The juveniles, ready to silt in case of danger, initially eat zooplankton, small crustaceans and amphipods, but as soon as the solid incisors appear the diet suddenly changes, because the adults can break the most substantial armours, like the sea urchins, crabs, gastropods and bivalves during the reproductive period © Giuseppe Mazza

Coris formosa is a solitary diurnal species, with juveniles very quick in silting in order to escape the predators. The dominant males have one or more harems they review during the reproductive period to fecundate the females ready to lay. There are no parental cares and the eggs are then abandoned to the currents.

The juveniles in aquarium adapt easily but they risk to disturb the pool with their hectic digging activity. Then, growing, they become territorial and aggressive. It is obvious that, considered also the dimensions of the adults, it is a fish suitable only for the big pools of the public aquaria.

The resilience of the species is weak, seen that are needed 4,5-14 years for doubling the survivors of populations decimated by the events, and as a matter of fact the vulnerability index is unluckily high, marking nowadays (2020) 55 on a scale of 100.

Coris formosa was last modified: May 3rd, 2022 by Peppino