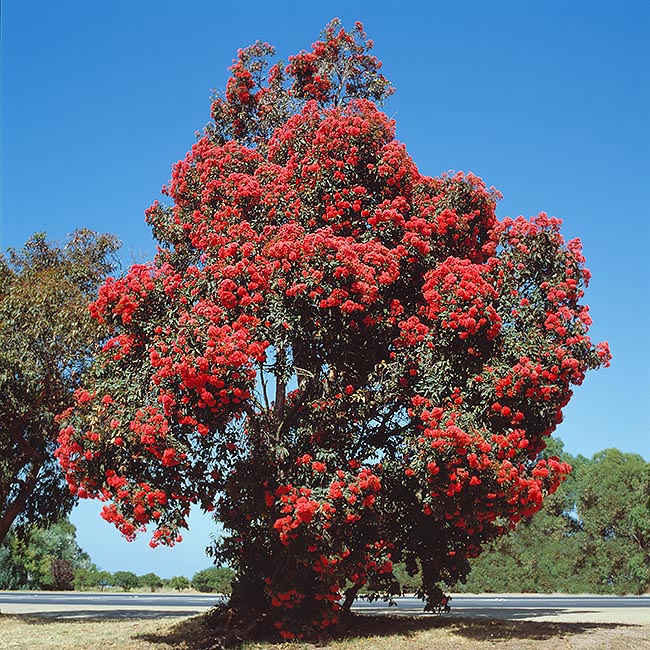 The species is native to the forests of a limited area of the coast of south-western Australia (Western Australia), where it grows on sandy, stony soils and on granite outcrops.

The Corymbia ficifolia (F.Muell.) K.D.Hill & L.A.S.Johnson (1995) is an evergreen tree, tall up to about 12 m having a trunk with brown grey bark, rough, fissured longitudinally and a thick and roundish foliage.

The leaves are simple with entire margin, ovate-lanceolate, 6-15 cm long and 2-5 cm broad, alternate, opposite in the first two nodes in the young plants, coriaceous, opaque or slightly glossy, dark green on the upper page, pale green below, aromatic.

The inflorescences are in terminal corymbs of 15-30 cm of diameter on a short peduncle, formed by umbels with 3-7 flowers of 3-4 cm of diameter; the buds are obovoid or piriform with sepals and petals united forming a sort of a cap (operculum) falling down when the flower is ripe, freeing a crowd of 1-1,5 cm long stamina usually of a bright red colour, but also in several hues of pink, orange and cream white.

The pollination is effected by nectarivorous birds, bees and other insects. The fruits, persistent for about one year, are urn-shaped, 2-4 x 2-3 cm, and contain ellipsoidal seeds, laterally winged, of dark brown or blackish colour. 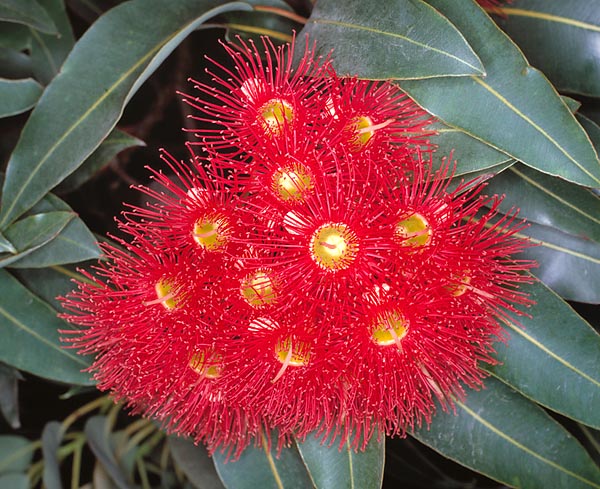 Resistant to drought, high temperatures and pollution, is often cultivated along the roads © G. Mazza

It usually reproduces by seed, in sandy soil kept humid, which germinates in 2-4 weeks at the temperature of 20-22 °C; it blooms starting from the seventh year of age, but rarely the colour is the same as that of the mother plant.

In order to be sure of the variety, we have to use the grafting, but the percentage of success are rather low, usually on Corymbia maculata and Corymbia gummifera, which adapt to wider conditions of cultivation than the ficifolia, in such case the flowering will take place starting from the third year.

It is one of the most spectacular trees for the flowering which happens in various periods of the year, up to almost hide the foliage in summer, when it reaches the top.
Of fairly fast growth, it prefers sandy, even if poor, soils, perfectly draining, acidic or neutral; in alkaline soils it may show symptoms of chlorosis.

It may be cultivated in full sun in the zones with Mediterranean type climate or temperate with poor rainfalls and humidity in summer, not bearing the tropical and humid subtropical climates; for what the temperatures are concerned, the young plants must never be exposed to temperatures just below 0 °C, for the adults the minimal survival temperature stands usually between -2 and -4 °C, depending on the health status of the plant and the conditions of cultivation.

Of great ornamental effect, it may be utilized as isolated specimen, also in small gardens, seen its fairly contained dimensions, in group or for barriers, also as windbreak. Due to its resistance to the urban pollution, to long drought periods and to the high temperatures, it is utilized as street tree, far enough from the sidewalks in order to avoid damages by the radical apparatus, in the road and motorways median strips and as tree for shade in the parking lots. Inflorescences and foliage are used in the floral compositions.