The plant is native to Cambodia, Laos, Thailand and Vietnam where it grows in the dry forests or in the open spaces along the water streams, up to about 600 m of altitude, in zones characterized by a marked seasonality.

The name of the genus comes from the Greek “coryphe” = summit, top, with possible reference to the great terminal inflorescence; the species is honoured to the French botanist Paul Henry Lecomte (1856-1934).

The Corypha lecomtei Becc. ex Lecomte (1917) is a solitary plant, monoecious, monocarpic (bearing fruit only one time during its existence), with a stem tall up to about 6 m and a diameter up to 70 cm, usually covered by the persistent residuals of the petioles of the fallen leaves. The leaves are costa-palmate, ascendant, green-grey, about 3 m broad, divided into several segments long 2 metres at the centre and united at the base for about half of their length; the apices are pendulous. The petioles are robust, up to 6 m long, green with black borders and equipped with close thorns, 1 cm long. The inflorescence is terminal, erect, pyramidal, ramified, and long up to about 10 m on a 2 m tall peduncle, with whitish hermaphrodite flowers. The blossoming occurs when the plant is from 40 to 60 years old, during which the palm has stored in the trunk a great quantity of starch which transforms in sugars necessary to produce the enormous inflorescences. 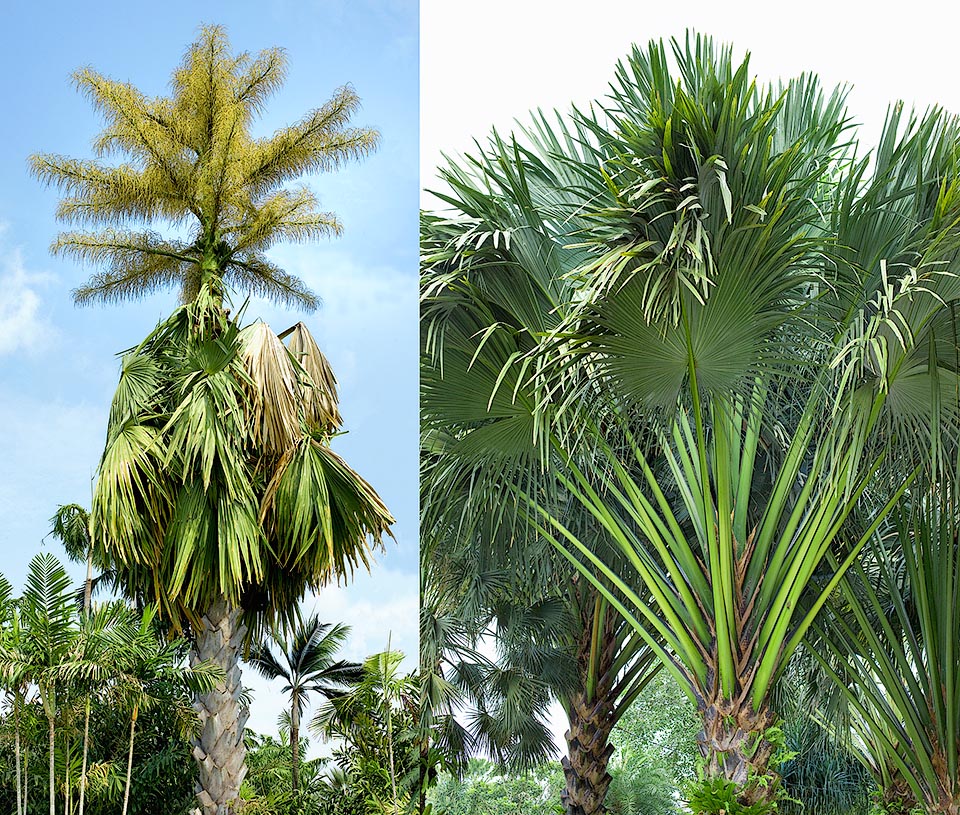 Typical ascendant leaves with 6 m long petioles. The blossoming of Corypha lecomtei occurs only one time, when the plant is from 40 to 60 years old © Giuseppe Mazza

The fruits are globular, 7-8 cm long, of brown colour and containing one seed only. When the fruits are ripe the plant, as previously said, passes away. It reproduces by seed, utilizing rather deep containers. It germinates in 3-6 months. Palm which in the past was much diffused, being a dominant species in some zones, now its distribution area has drastically reduced due to the expansion of the agriculture and in some zones is now at risk of extinction. This showy palm has had in the past a remarkable importance in the life of the local populations. The fibres gotten from the long petioles were utilized for fabricating sails, ropes and, still nowadays, headgears, baskets and many other objects of common usage.

The great leaves served as cover for the huts and makeshift shelters and also the fruits, even if not holding a particularly good taste, were consumed in case of necessity. But the most characteristic utilization of the leaves was as writing material, especially for the holy texts, due to their long duration and their resistance to the tropical climate, as is shown by the several manuscripts which have come to us. The leaves were cut when still closed and prepared following a definite procedure before being utilized for writing.

The plant is little cultivated outside its origin zone and there are not, for instance, many information about its resistance to the low temperatures. It looks like that the leaves get damages at -2 °C, and that the whole plant dies when the temperatures decrease of further two, three degrees, even if for very short time. It does not seem too demanding about the soil and it may resist to drought periods, as on the other hand happens in its habitat.