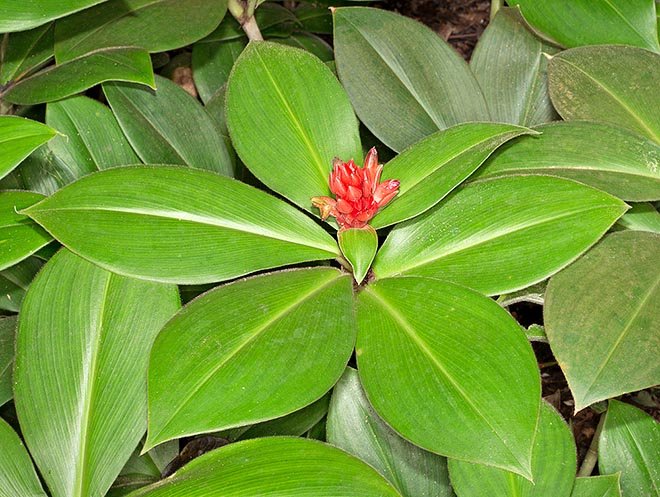 The species is native to Costa Rica, Colombia, Nicaragua and Panama where it grows in the underwood and at the margins of the humid forests up to about 1600 m of altitude.

The generic name was given by Linnaeus in honour of Dioscorides who had described a plant, deemed similar, with the name of Kostos; the specific name is the combination of the Latin adjectives “curvus, a, um” = curved and “bracteatus, a, um” = equipped with bracts, with obvious reference.

The Costus curvibracteatus Maas (1976) is an evergreen, perennial rhizomatose herbaceous species, 0,5-1,5 tall, rarely more, with spiralled cylindrical stems of 1,5-2,5 cm of diameter. The leaves are alternate and spirally arranged, obovate to elliptic with pointed apex, 15-35 cm long and 5-10 cm broad, coriaceous, of dark green colour, glossy above, opaque below.

The terminal inflorescence is an ovoid to fusiform spike, 4-18 cm long, and of 3-8 cm of diameter, formed by glossy imbricate bracts of red or orange red colour at the base and yellow apex curved outwards, about 4 cm long and 1,5 cm broad, inside which form hermaphroditic flowers with red calyx, 1,5 cm long, and tubular corolla of yellow or orange red colour, usually of about the same length as the bracts, with labellum formed by the merged sterile stamina, about 3 cm long and 2 cm broad. The fruits are ellipsoid capsules about 1,5 cm long containing numerous seeds with white fleshy aril, that favours their dispersion through the birds eating them.

It reproduces by seed, previously kept in lukewarm water, in particularly draining compost maintained constantly humid, but without stagnations, at the temperature of 24-26 °C, and easily by division and stem cutting. Ornamental species for the foliage and the long blooming period, from late spring to early winter, cultivable in the tropical and humid subtropical climate zones, its cultivation may be tried, in sheltered position, in the milder warm-temperate ones, keeping in mind that temperatures little under the 10 °C cause damage to the foliage and the aerial part dies by around the 0 °C, whilst at level of rhizome it can resist up to -3/-4 °C for very short period, if well mulched. Requires an exposition from partially shaded to shaded and draining soils rich of organic substance, acidic to neutral, maintained constantly humid, but without stagnations; due to its compact vegetation is often utilized to form edges and as soil cover in shady gardens.

It well adapts to the cultivation in pot, utilizing an organic loam with addition of siliceous sand or perlite per a 30% to improve the drainage, to be sheltered in spacious ambients where the climate does not allow the permanence in open air during the coldest months, with night lowest values of temperature not under the 14 °C; useful are the nebulizations with non-calcareous water, to avoid antiaesthetic spots on the leaves, if the ambient is too dry. The waterings must be regular and abundant during the vegetative period, reduced in winter, but without ever allowing the substratum to dry up completely; the fertilizations, in spring summer, are to be done with hydrosoluble balanced products with microelements under form of chelates at half the dosage suggested on the package.