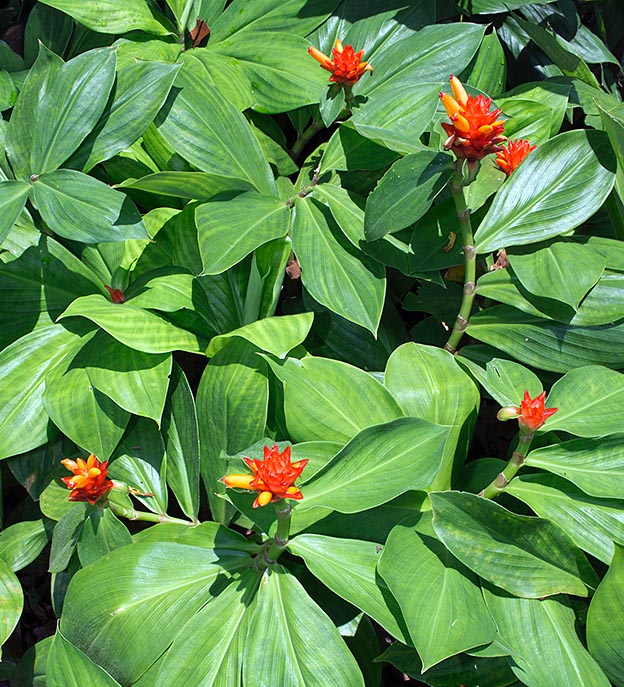 The species is native to Peru, where it grows in the foothill humid forests of the eastern side of the Andes between the 300 and the 700 m of altitude.

The name of the genus was given by Linaneus in deference to Dioscorides who has described a plant, deemed similar, with the name of Kostos; the name of the species is the Latin adjective “productus, a, um” = prolonged, with reference to the relatively long callus of the bracts.

Ovoid terminal inflorescences 5-10 cm long formed by ovate imbricate bracts of bright orange red colour, up to 2,5 cm long, with pointed appendix and callus (hardened extremity) 0,6-1,2 cm long, which enclose a tubular hermaphroditic flower, up to about 5 cm long, of pale yellow to orange yellow colour. The flower is formed by the calyx, about 1 cm long, with three almost triangular lobes, corolla with about 1 cm long tube and three oblong lobes 3,5-4 cm long and 1 cm broad, 3,5 long fertile stamen and tubular labellum, formed by the merged sterile stamina, 3-3,5 cm long, orange red at the extremity; the pollination is ornithophilous. 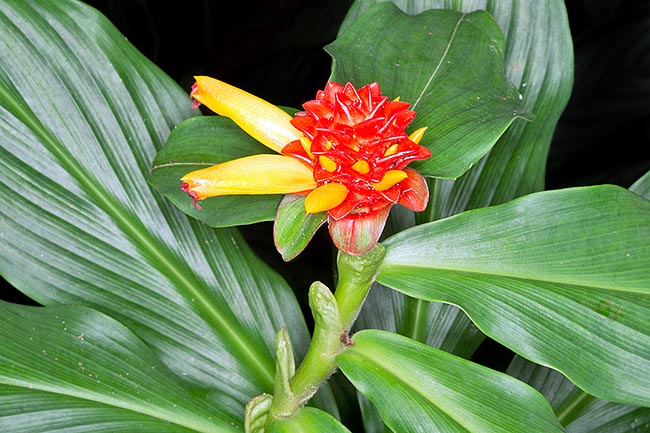 Species amongst the most floriferous and ornamental of the genus, it is cultivable in the tropical and subtropical humid climate zones where the flowering lasts for good part of the year, its cultivation may be tried in the warm-temperate ones where temperatures close to 0 °C are a short-lasting exception, in position sheltered from the rain, in which case it presents a marked resting period in the winter months or, at the limit, the loss of the aerial part, but with fast recovery in spring and blooming in summer.

It requires partially shaded position and soils rich of organic substance, draining, kept constantly humid, but without stagnations; due to its contained size is ideal as soil cover and for edgings, as well as isolated specimen. Cultivable also in pot for the decoration of luminous interiors, with lowest temperature preferably not less than 15 °C, utilizing an organic substratum with addition of siliceous sand or perlite per a 30%, for improving the drainage; the watering must be regular and abundant in summer, more spaced in winter, but without ever allowing the substratum to dry up completely. The fertilizations must be done during the vegetative period with hydro-soluble balanced products with microelements. The flowers are edible and are at times consumed in salads whilst the cut inflorescences are utilized in the floral compositions.