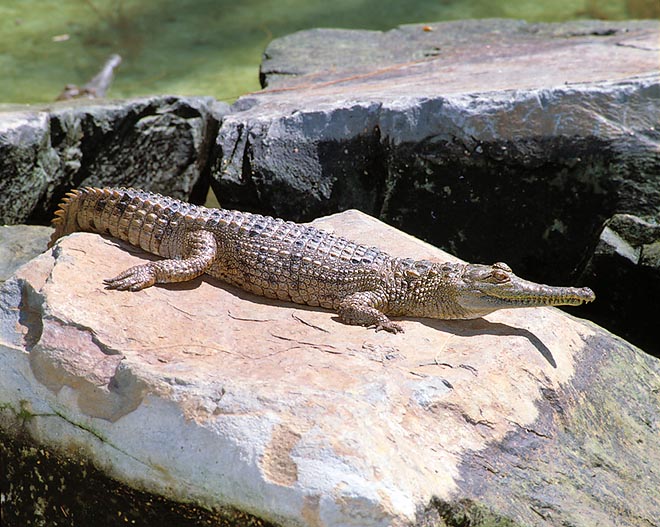 In the wild, the Australian Freshwater crocodile (Crocodylus johnsoni) is just longer than 2 m © Giuseppe Mazza

The etymology of the lemma has “crocodylus” lready been discussed, word coming from the ancient Greek and meaning “worm-shaped pebble”, whilst the term “johnstoni” or “johnsoni” comes from Johnston, a European master mariner who discovered it during a sea voyage on board of a navy vessel which called Australia and sent then a specimen of the same to the biologist Johann Ludwig Gerard Krefft for the relevant classification.

The Teutonic biologist honoured this specimen of crocodile to the captain Johnston, but, unluckily, enunciated his name wrong; the mistake lasted till 1983 when another biologist, Hal Cogger, while revising the classification of this crocodile, realized the error and set up its correct scientific denomination as Crocodylus johnstoni.

For the truth’s sake, in all Australian states up to now, the right denomination has been always utilized, whilst the only country where the error continued is the USA where even the 1983 Hal Cogger’s revision has been ignored; as a matter of fact, in the USA, it is still now called Crocodylus johnsoni, especially in non-academic environments, albeit the American biologist Burke has pointed out such error.

The International Code for Zoological Nomenclature (ICZN) classifies it as Crocodylus johnstoni, which is the proper and real binomial scientific denomination.

Presently, the biologists do not contemplate subspecies or races for this crocodile; the existence of some dwarf, or pygmy, specimens, called “stone country crocodiles” because present in rocky areas or inside escarpments close to water streams, having reduced dimensions, a maximum of 1,7 metres of length for the males and about 0,7 m for the females, are nor recognized as races, as these differences do not appear to be caused by genetic factors, but possibly are due to a reduced availability of food.

The CITES inserts it into the appendix II, whilst the IUCN deems it as a little endangered species, at least till now, that is LRIc (Low Risk). Biologists think that the present population amounts to about 50.000-100.000 specimens.

Essentially, the habitats where this species does live are still now healthy and this has allowed it to recover the numerical reduction gotten especially during the last century, due to the skins trade.

The presence of the Giant neotropical toad, or Cane toad (Bufo marinus Linnaeus, 1758) one of the most infesting species of anurans of the world, is possibly, after many biologists, the major threat for the survival of this loricate; the reasons are not clear (maybe this anuran is the carrier of some parasite which is harmful for this crocodile, or the bufotoxin that impregnates its skin, is toxic for this crocodile which might eat it), in any case the biologists have found a positive correlation between the increasingly population of this toad and the numerical reduction of the Crocodylus johnstoni. 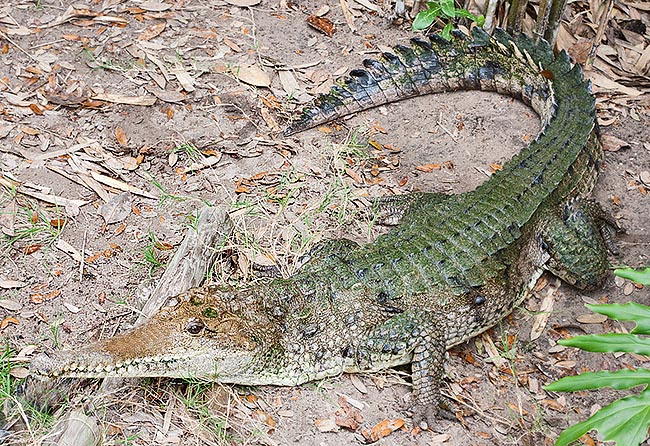 It mainly eats fish as the elongated bill, similar to the gharial's, indicates © Giuseppe Mazza

It’s a species endemic to northern Australia, in particular to the northern territories, in the states of Queensland and of Western Australia.

The Johnston’s crocodile lives in lakes, swamps, in the “billabongs” (term coming from the Australian English under which are identified small lakes called also “oxbow lakes”, which form from lateral branches of a river and which, due to the nature of the bottom, assume a U-shape), in creeks and in counter-flow river areas characterized by a variable salinity.

They do not live close to the coast, and not even in mangrove areas, due to a too high water salinity and mainly for the presence of a too strong competitor, the Saltwater crocodile (Crocodylus porosus), which is the biggest loricate and one of the most aggressive of the planet. In any case, in the past, when the population of this fearful competitor did reduce due to the hunting to which it was submitted, the Johnston’s crocodile adapted to live also in these areas.

The longirostral nature of the bill identifies its piscivorous feeding, and n fact, the fish is the basic food characterizing its alimentary ecology. Actually, the spectrum of the preys it eats is ampler; among them we find aquatic and terrestrial arthropods, molluscs, amphibians, even if these ones are preys more peculiar to the subadults.

The adults, being bigger, may nourish also of other vertebrates including amphibians, reptilians and birds, as well as of small terrestrial mammals, which they may seize out of the water, keeping motionless and biting the unlucky of the moment with an instantaneous rotary movement of the head.

During the dry season it eats less due to scarcity of preys; the water streams where it lives dry up and the fish is missing, as well as other animals. In this period, the hunting activity becomes nocturnal, when it’s cooler, whilst during the rain season is active during the day.

The Australian freshwater crocodile is a small loricate, which does not exceed, in the biggest specimens, the 2,5-3,0 m. It takes more or less thirty years for reaching this size; and therefore the animals present in the wild usually measure 22,0-2,2 m.

The bill, unusually narrow and tapered, recalls to mind that of the Gharial (Gavialis gangeticus), the mouth is equipped with teeth which are sharper and more numerous than those of the Saltwater crocodile (Crocodylus porosus), where they are more obtuse.

The livery of the adults has a light brown colour, with black or dark grey stripes on the body as well as on the tail; these stripes are more clearly separated on the neck. Some specimens have black stripes or spots also on the muzzle. The scales of the body are big, on the back, they form armour with a very articulated pattern, and more rounded scales cover the sides and the legs. 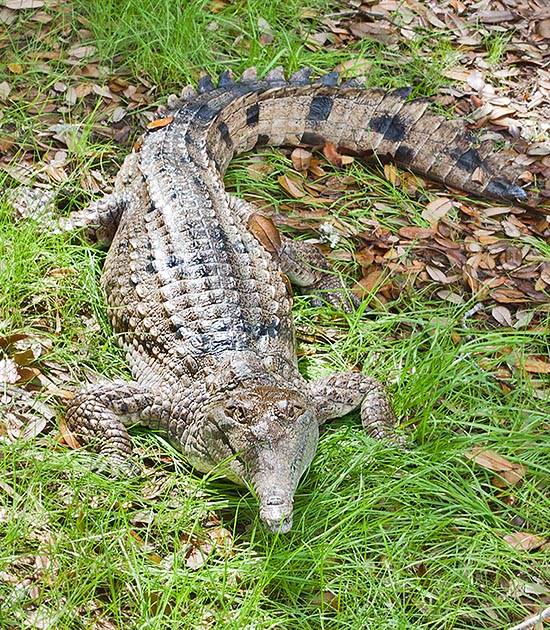 It preys birds and mammals too, but is menaced by a toad, the Bufo marinus © Giuseppe Mazza

The males ripen sexually when they reach a size of about 1,5 m; the females do the same with a slightly smaller size.

The courting takes place in the first months of the dry season (by May). This induces an ethological stimulus in the female, which resolves in the construction of the nest sometime between July and September. The precise period depends on the geographical area where they are located.

The females dig the nest along the sandy margins of the water stream, which are humid because during the autumnal period, corresponding to the rain season, they have been wetted by the floods water.

Some British herpetological biologists have observed, during the eighties of the last century that the females present inside the same group tend to start, synchronically, the construction of the nest during the same week of the three which represent the “nidification impulse”.

More females may build the nests on the same sandy bank, one after the other, and at times they may build a common nest.
The eggs are deposited about six weeks after the coupling has happened at a depth of about 12-20 cm in the nest, in order to avoid, as should happen if in the surface, too high incubation temperatures which can kill the developing embryos. The best incubation temperature is, in fact, of 30-33 °C.

Usually, the females lay 13 white eggs of medium size, but the deposition can vary from 4 to 20 eggs. The incubation period is of 75-85 days, even if intervals of 65-95 days have been observed. The eggs incubated at 32 °C produce masculine progeny, whilst by temperatures of 30 or 34 °C we get only females. In any case, the greatest sex ratio is directly proportional to the frequency of thermal fluctuation inside the nest, that is, more frequently, the more the temperature varies in the above mentioned periods inside the nest, the more the proportion between the sexes in the progeny varies.

The Australian monitor lizards and the feral pigs easily nourish of the eggs, as the mother leaves the nest unwatched immediately after the deposition. Especially the varanids, may, by means of the sense of smell, localize a nest where the eggs have been laid from 24-48 hours; less than a third of all laid eggs, in all nests, can hatch.

The mothers come back by the end of the incubation period. At this time, the young, just before the hatching (where they will break the shell by means of an egg tooth present in the muzzle which will disappear immediately after the birth), draw their attention with mooing cries and the mother, as soon as they are out from the shell, takes them gently in the mouth and carries them to the water.

The mothers protect the young for a variable time, in any case always less than that taken by the females of the sympatric species of marine crocodile (we remind that in ecology, two species are called “sympatric” when they live in the same geographical region, whereby the mechanism which have evolutionally contributed to their speciation, through the forming of diverging characters, are not of geographical nature, but of another one, which is, on the contrary, the main cause of speciation by isolation, between two “allopatric” species, whether vegetal or animal).

The disturbance due to noises caused by the human presence is one of the reasons which oblige many females to leave the nests and the progeny present in them. During the rains reason, it also happens that, in a certain area, all nests are destroyed due to the overflows of the water streams. This combination of factors, to which add even sporadic cases of cannibalism in the dry periods due to lack of preys, cause only the 1% of the theoretical progeny to reach sexual maturity.

This low percentage causes, in the groups of the Johnson’s crocodile, the number of subadult or young individuals to be fairly low. The few survivors; whatever males or females, will come back, when adult and during the reproductive period, in the areas where they have come to life.