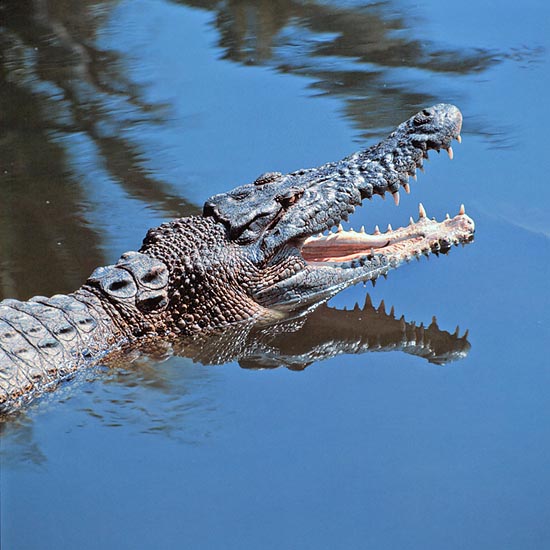 In the wild, Crocodylus siamensis counts 5.000 units only © Giuseppe Mazza

The lemma “crocodylus” means, as already many times said, “worm shaped pebble”, whilst the term “siamensis” (of Siam), comes from the Latin siam+ensis and means “belonging to”.

It should be noted that the name Siam is how Thailand, or, more exactly, the Kingdom of Thailand, was called until the 1939 and that in any case the distribution of this loricate is not limited only to this region, but also in others of the Asian south-east, in particular in Indochina.

As already mentioned in the text of the Saltwater crocodile (Crocodylus porosus), some biologists hypothesize that in Borneo, a present species, called Crocodylus raninus, is often mistaken with the Siamese crocodile (Crocodylus siamensis), though some proofs seem to validate the hypothesis of a new species. The data available are still too scarce, and this classification is rejected by the International Commission for Zoological Nomenclature (ICZN).

After other herpetological biologists, recent genetic works should evidence that the Crocodylus raninus is only a Crocodylus porosus slightly modified in its look, but with minor differences, not sufficient for creating a race or a subspecies of this loricate. 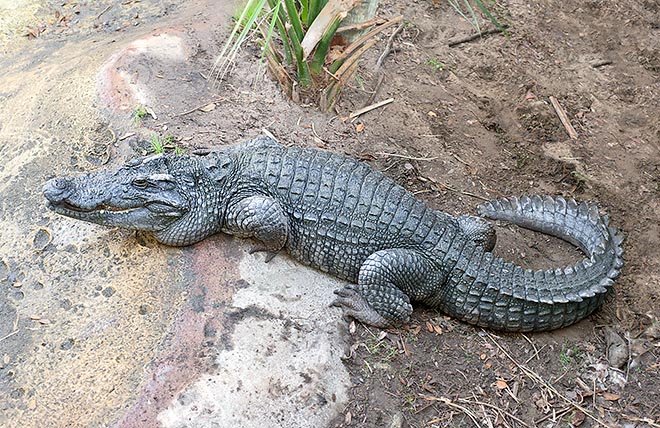 CITES inserts it into Appendix I, IUCN defines it as "critically endangered" © Giuseppe Mazza

The CITES places the Crocodylus siamensis in the appendix I, the IUCN defines its status of this species as “critically endangered”, that is, CR A1ac.

Biologists talk of a population under the 5.000 members.

It is close to extinction in several countries, where, historically, in the pas it had a good density of population, the only country where, even if also here severely endangered, hints of extinction have not yet appeared, is Cambodia, or better, the Kingdom of Cambodia, a country localized in the southern portion of the Indochinese peninsula, in south-eastern Asia; this country borders Laos to the north-east, Thailand to north-west, the Gulf of Thailand to the south-west and Vietnam to the east.

It is autochthonous in Cambodia, Brunei Darussalam (which means The Abode of Peace), Indonesia, Java and Borneo included, Malaysia (Sarawak, Sabah), Laos PDR, Vietnam, Myanmar, and Thailand. As in many of above nations there has not been done any census since several years, it might even be extinct. 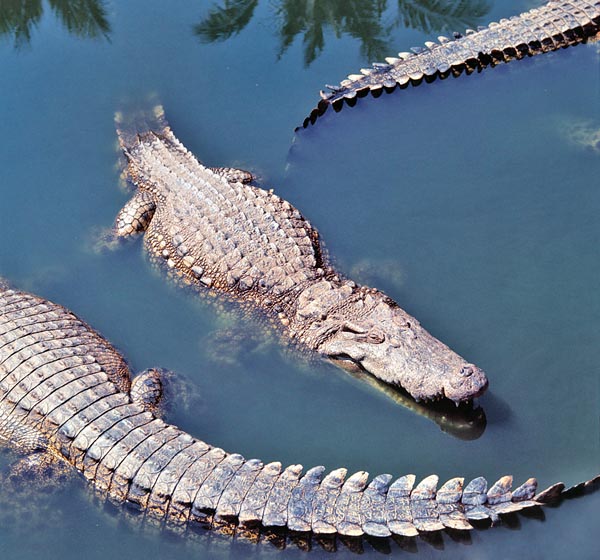 As the wide snout suggests, it eats all, from fishes to small mammals © Giuseppe Mazza

We do not have great knowledge about the ecology of this species; probably, it prefers the slow, but lotic, freshwater streams, for instance, swamps and freshwater lagoons and sheltered parts with vegetation of rivers and creeks. These marshy areas may act also as shelter points for small populations. They are observed also in lakes and, even if rarely, also in brackish areas.

After several Asian biologists, the Crocodylus siamensis should be already extinct or very little is missing for this to be realized. Actually, even if the situation is really critical, we do not have yet the certainty that this has happened, also because though in the last two, three years have started some international projects for the census of the population of the Siamese crocodile, still there are not enough and, above all, sure data available.

Some WWF English biologists have declared that there is a handful of these crocodiles in Thailand, perhaps a twenty, which may quickly extinguish, seen the economical and urban boom this country is living from some years onwards.

In Cambodia, where they think that this species has the biggest density, they hypothesize that there may be from 50 to 4.000 specimens in the wild, but this is all to be confirmed; furthermore, seen the low prolification and the difficulties these reptilians do have for keeping intact their nests, also in this region the situation is quite critical. The reproductions in captivity are fairly easy to obtain for this species; also, the stocks managed in the crocodile farms are sufficiently healthy and robust for being utilized for repopulating the various areas in the wild, where it is nowadays clear the phenomenon of the emptying. 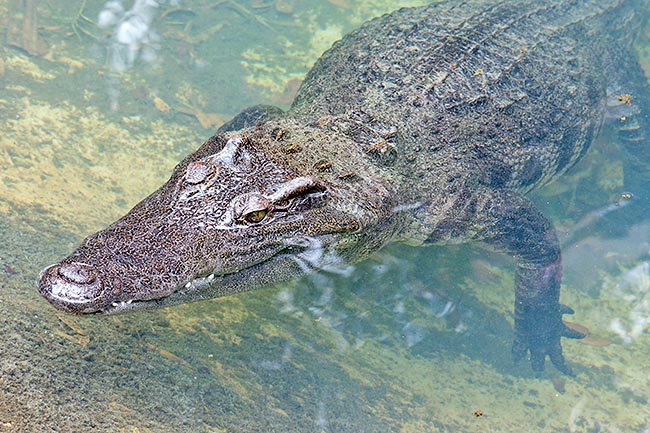 It loves slow and lotic waterways, such as swamps. Little prolific in the wild © Giuseppe Mazza

Perhaps in some region this phenomenon is reversible, but in others it isn’t! The major menaces for the Siamese crocodile come from the hunting for the skins, from the killings because considered, erroneously, dangerous animals and from the more and more pronounced tendency to transform the areas where they live in agricultural. Actually, after other biologists, the hypothesized threat for this species of crocodiles is to be deemed less serious than what is thought, as the data of biology of population should be updated and revised.

Indeed, the venatorial pressure for getting the precious skin is nowadays reduced just because the trade of the skins has induced the birth of an eco-sustainable management, through the breeding in crocodile farms. The biologists do confirm that it is not a dangerous species for the human being. Hybridization phenomena with the Saltwater crocodile (Crocodylus porosus), are to be avoided, biologists say, especially in captivity, in order not to pollute the bloodline of both species. For the breeders trading in skins and utilizing the crocodile farms only for such purpose, these hybridizations are, on the contrary, a godsend, because the hybrid inherits from the saltwater crocodile a growth rate much bigger and a bigger size than the Siamese crocodile, and this ultimately means a bigger quantity of skins to tan and to sell for use in the leather wear. 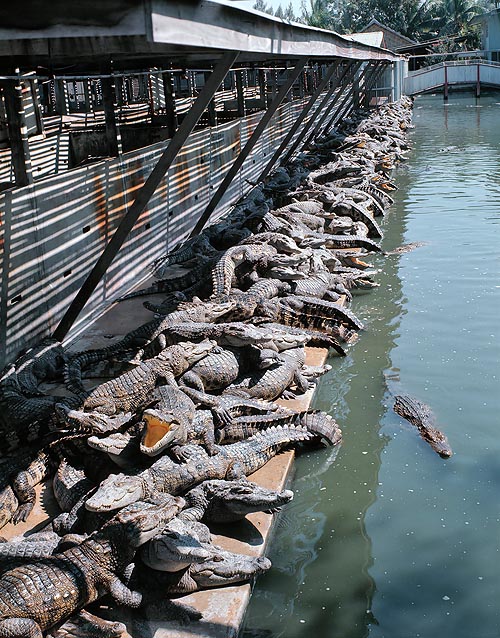 In Thailand, they have started projects of repopulation by freeing stocks of Siamese crocodile bred in captivity, taking care not to free hybrids, thus keeping a pure genetic reserve.

This species nourishes of fishes, amphibians, reptilians, water birds and small mammals, the width of the snout identifies a generalized strategy and alimentary adaptation, they are euryphagous; unluckily, most of the information about their alimentary ecology come from studies in captivity, little is still known about the feeding preferred when in the wild.

The males may reach the 3-4 m of length, but usually they do not exceed the 3 m, the females are slightly smaller; the hybrids between saltwater crocodile and Siamese crocodile may easily exceed the 4 m.

The young of the pure species of Crocodylus siamensis have a yellow livery, banded in black on the body as well as on the tail, like the saltwater crocodile, but, while growing, they become saurian grey-green, the snout widens and the throat scales become more transversal.

It can happen that some sub-adults specimens are “hypo-melanic”, that is, the contents of melanin into their melanophores is lower than the normal, and for this the back will tend to gat a golden colouration; this condition is probably due to a genetic mutation, different from those causing the albinism (total absence of melanin and pigment in the skin) and leucism (reduced melanin, but a slight quantity of melanin is kept into the skin).

The captive specimens of this species get mature when 10 years old; the couplings begin during the rain season (April-May). The female lays from 20 to 50 eggs in a nest of mud and vegetal material, which she will watch all over the incubation period. The eggs will hatch after about 80 days. The female will open the nest and, gently, with its mouth, will carry the newborns into the water. We do not know for how long time the parental cares will go on after the birth of the progeny.