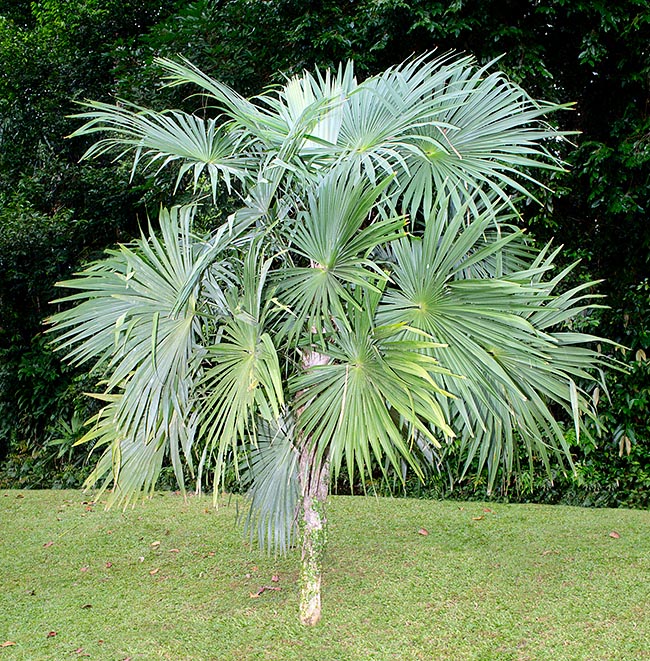 The species is native to Costa Rica, Honduras, Nicaragua and Panama where it grows in the pluvial forests at low and medium altitudes on mainly calcareous soils.

The name of the genus is the combination of the Greek terms “kryos” = ice, frost and “philos” = friend, perhaps with reference to the species type, the Cryosophila nana (Kunth) Blume ex Salomon (1887), living in Mexico up to about 1700 m of altitude; the species is honoured to the Polish Józef Warszewicz Ritter von Rawicz (1812-1866) who introduced it in cultivation in Europe.

The Cryosophila warscewiczii (H. Wendl.) Bartlett (1935) is a monoecious species with solitary stem, erect, up to about 10 m tall, and 10-15 cm of diameter, greyish, covered by ramified thorny roots, at least in the juvenile stage, which, at the base, root forming a sort of a cone.

The leaves are palmate, almost circular of 1,5-2 m of diameter, deeply divided in two almost equal halves, in their turn subdivided in numerous less deep segments united in groups of 2-4, with pointed or bifid apex, of dark green colour on the upper page, covered by thick grey tomentum below; the petiole, unarmed, is 1-2 m long with fibrous and tomentose base. The ramified inflorescences, hanging, 0,4-0,7 m long, generate between the leaves (interfoliar), with each ramification enclosed by a bract, deciduous, concave and tomentose, whitish externally; the flowers, spirally arranged, are white, hermaphroditic, proterogynous (the stigmata are receptive before the ripening of the pollen, this favours the cross-fertilization), with 6 stamina and three pistils.

The fruits are globose to obovoid, 2-2,6 cm long and of 1,5-2,3 cm of diameter, of white colour, containing one globose seed of 1-1,6 cm of diameter. It reproduces by seed which germinates in 3-6 months, or more, at the temperature of 22-24 °C; the first leaflet is simple, entire, white below.

It is a particularly ornamental species due to the contrast between the dark green upper page of the leaf and the silvery white of the lower one, as isolated specimen as well as in groups, cultivable in the humid tropical and subtropical climate zones; its cultivation may be tried in the milder warm temperate zones, where it can resist, when adult, to values of temperature up to about -2 °C, with damage to the foliage, provided these are exceptional and of very short duration. It requires a position in filtered sunlight or semi-shaded and is not particular about the soil, even if poor, does not bear the wind and the long dry periods. It adapts to the cultivation in pot, during the juvenile stage, for the decoration of inner spaces, greenhouses and winter gardens, utilizing a substratum rich of humus with addition of coarse sand, agri-perlite or other inert around the 30%, for improving the drainage, kept almost constantly humid, but without stagnations, with temperatures preferably more than 15 °C.

The leaves are locally utilized for fabricating brooms and brushes.