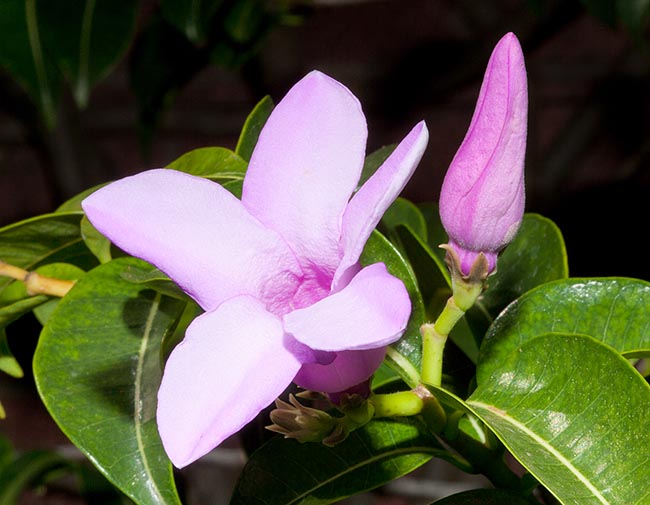 The species is native to south-western Madagascar where it grows in the semi-deciduous forests close to water streams or periodically flooded areas.

The Cryptostegia grandiflora Roxb. ex R.Br. (1819) is an evergreen semi-erect shrub or a woody climber, particularly aggressive in presence of supports, with vigorous stems elongating for more than 20 m so much to cover even big trees; from the incisions it exudes an abundant sticky and irritant latex.

The leaves, on a 0,8-1,2 cm long reddish purple petiole, are opposite, simple with entire margin, oblong, coriaceous and thick, of glossy dark green colour, 6-10 cm long and 3-5 cm broad.

The inflorescences are terminal cymes dividing dichotomically or trichotomically, carrying pale pink to intense purple flowers with calyx having five pointed lobes, about 1,3 cm long, with campanulate corolla having pointed lobes, 5-6 cm long and 4-7 cm of diameter, and 5 stamina.

The fruits are woody follicles with usually triangular section, 10-12 cm long and 2,5-4 cm broad, produced in pair and opposite, containing an average of 350 oblong brown 0,8 cm long seeds, with an extremity provided with a tuft of silky white hair, about 3,8 cm long, which facilitates its dispersion through the wind and in water. 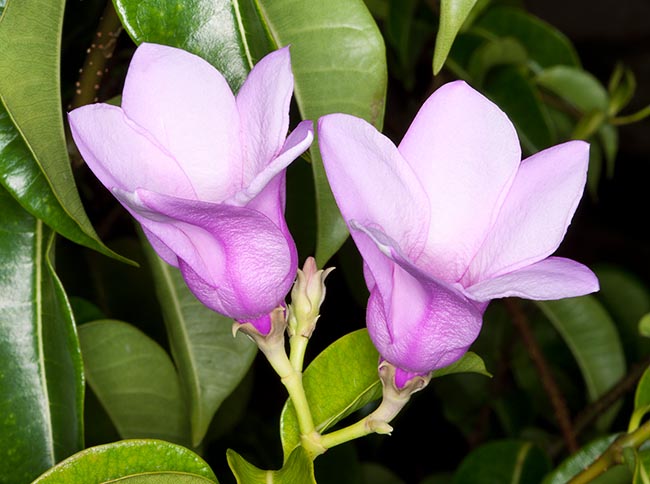 It easily reproduces by seed, which germinates in 1-2 weeks at the temperature of 22-24 °C, with the first flowering, at the tropics and in favourable humidity conditions, within one year from the germination, and by cutting and layering.

Very ornamental, vigorous and fast-growing species, adapting to various types of soil, even saline, capable to bear periods of dry, also thanks to a wide rooting apparatus which may go many metres deep; cultivable in the tropical and subtropical climate zones in full sun, it can resist for a very short period to temperatures just under the 0 °C.

Introduced in many countries as ornamental as well for the production of rubber, then abandoned because proved to be uneconomical, has escaped cultivation averring, in the particularly favourable situations for its development, like in the monsoon climate zones, a highly invasive species capable to suffocate and replace the pre-existent vegetation, occupying wide areas with an impenetrable vegetation, as it happened in northern Australia, where they are trying to limit its expansion with chemical, mechanical and biological means.

Furthermore, all the parts of the plant are highly poisonous due to the presence of cardio-active glycosides, in particular in the leaves and the stems, the ingestion of few leaves may be fatal even for big animals, which however, usually, avoid to chew them due to their taste, except when in absence of pasture in particular drought periods.

If ingested, the seeds cause a serious form of gastroenteritis that can be deadly and the contact with the lymph causes serious allergic reactions, consequently possible operations on the plant are to be done wearing gloves, in case of direct contact it is indispensable to wash at once the involved part with water and soap; even the fragments of dried wood may cause allergic reactions.