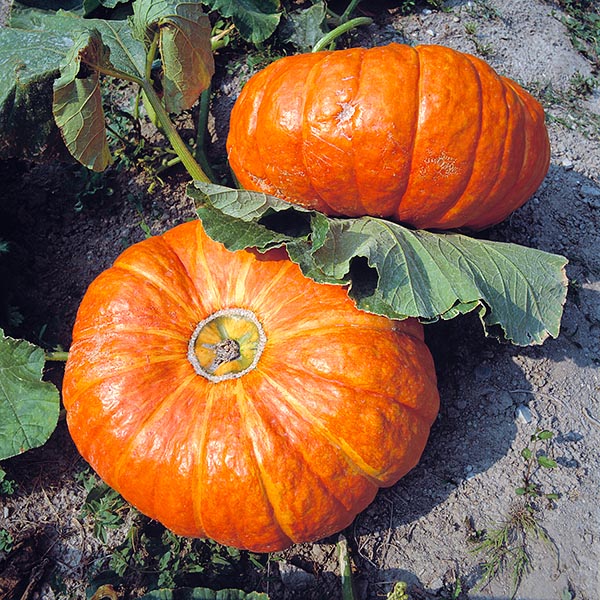 The Squash (Cucurbita maxima Duchesne 1786) and the zucchini are native to tropical America (Mexico, Peru), where they were cultivated already some millennia BC in Mexico (Puebla and Oaxaca) and formed, with the maize and the beans, the basis of the alimentation of those populations. They reached Europe only after the discovery of the Americas, and diffused, starting from the XVI century, also in Asia and in Africa, and nowadays are cultivated in most of the world. The genus Cucurbita hosts, depending on the various systematic classifications, 13 to 30 species.

The name of the genus “cucurbita” means in Latin squash; the specific one “maxima” means, always in Latin, maximum, the biggest, due to the size reached by the fruits.

It is a vigorous and big annual herbaceous plant, with procumbent or climbing stems, hollow, up to 6-8 metres long, ramose, wrinkled-angular, and bristly-prickly, with ramified cirri.

Alternate leaves, very big, rough but tender and fragile, of a nice green colour, often speckled of ashy pale green in the median part, with protruding nervations on the reverse, sub-cordate, palmate-lobed, with 3-7 lobes more or less deeply carved and rounded; they have a long and big petiole, hollow, papillose-pungent, wrinkly, very fragile.

The flowering goes on from July to August; 6-12 cm flowers, monoecious, axillar, on cylindrical peduncles, with bell-shaped open corolla with five yellow-orange petals. The fruit (pepo) is large, spheroid, usually compressed on the poles, of different shape depending on the variety, with deep yellow to yellow-orange pulp, consistent, mealy, and sweet. Big seeds, whitish, flattened, oval, with prominence at the apex, edible as well as the flowers. The squash is a cultivated plant and often grown wild close to the orchards, in the uncultivated spaces and around the garbage dumps (0-1500 m). Among the most widely cultivated species of the genus Cucurbita, due to the pulp of the fruits, the flowers (edible too), and the seeds, we recall, besides the winter squashes such as Cucurbita maxima (Yellow or sweet squash), and Cucurbita moschata (such as the butternut pumpkin or pumpkin “Piena di Napoli”), the varieties for zucchini of Cucurbita pepo, Cucurbita ficifolia (called Siam pumpkin) and Cucurbita argyrosperma or mixta, cultivated mainly in the USA. 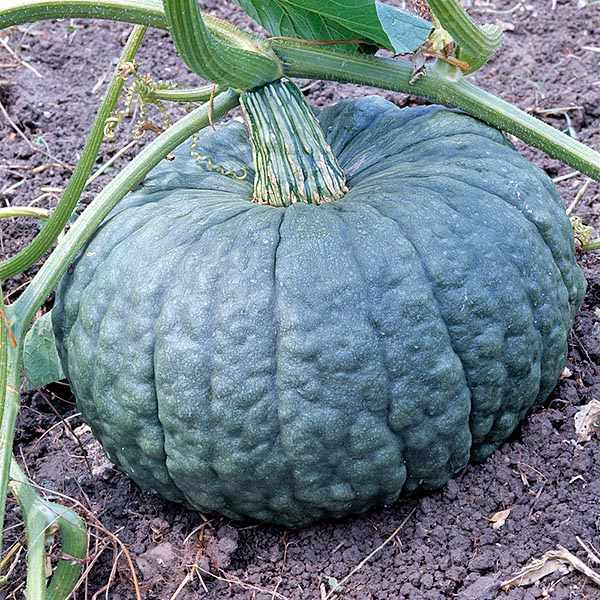 The squash needs fertile, light soils and lot of water and sun; it is sown in April-May in large orchards or in open field previous a good organic and chemical fertilization, distributing the seed (2-3) in small holes, than surface works follow for eliminating the weeds, thin out the shoots and the too many flowers in order to get bigger fruits and summer irrigations of relief. The harvesting is done from September to November leaving attached to the squashes a good portion of their peduncle in order to avoid the danger of rottenness. The squash is to be left some days under the sun, then is to be stored in the cool, possibly hanging in a net.

The plant is affected mainly by fungal diseases (powdery mildew, downy mildew, grey mould and leaf spot), by an aphid (Aphis gossypii), rarely by scale insects and others.

From the alimentary point of view, especially during the autumn and the winter, the squash is a vegetable much appreciated in the cuisine: it is employed in the stews, soups, purées, gnocchi, stuffing for ravioli, mustards, preserves, cakes, bread; its pulp is consumed boiled or fried.

I still remember, it’s unforgettable, the cyberneticist Silvio Ceccato, whom I listened one evening, in Orzinuovi, in my lower Brescia, in a rousing “Praise to the pumpkin”, digressing between the cuisine and the library, telling about chestnut soups and toasted polenta who were desperately fighting against the “Nouvelle Cuisine”….

The squash seeds (Semen Cucurbitae) collected in September are employed in phytotherapy due to their anthelmintic properties (taenifuges) against tapeworms and ascarids; they paralyze the taenia (or pork tapeworm) facilitating its detachment from the intestinal walls.

Recent studies have evidenced also a positive action in the cases of irritable bladder and in the disorders in urination associated with prostate oedema. To the Cucurbita maxima, gets alongside, in this context, also the Cucurbita pepo var. styriaca, the so-called pumpkin with bare seeds (without skin), native to Asia Minor, very active for relieving the ailments caused by the prostate benign hypertrophy. 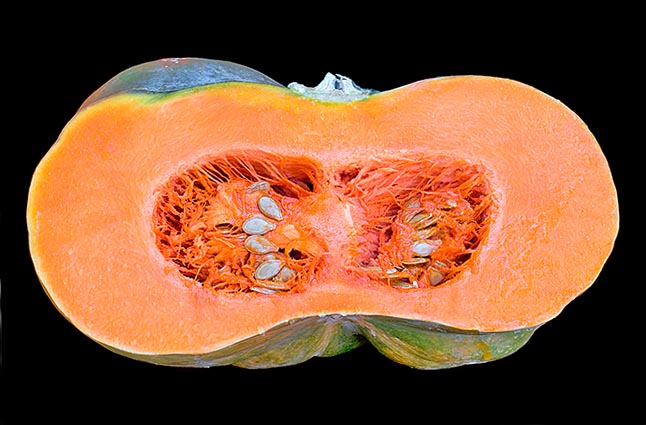 The seeds contain the 45% of oil composed by numerous glycerides, one peporesin, steroids, isoprenoside and beta-sitosterin with remarkable action anthelmintic not irritating and not toxic, besides the alkaloids cucurbitacin, cucurbitinae and vernin, contained in the skin of the bud primordial, citrullic acid, leucine, tyrosine, peponin, phytolecithin, vitamins A and E, arginine and mineral microelements.

Sixty grams of dried seeds (depending on the weight of the person) of squash, peeled and finely crushed in a mortar or ground in a blender (when fresh even entire). To amalgamate the result with 20 grams of honey or molten sugar and a dash of cocoa, to administer in three times spaced of half an hour each, alone, or mixed in a drink. To be followed after three hours by castor oil in order to favour the detaching of the parasites from the intestine wall.