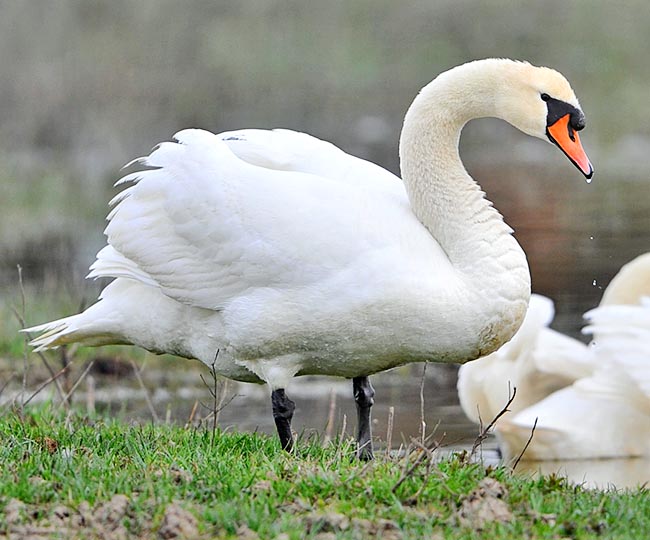 Cygnus olor may weigh 12 kg, with 160 cm of length and 240 cm of wingspan © Gianfranco Colombo

The Mute swan (Cygnus olor – Gmelin 1789) belongs to the order of the Anseriforms (Anseriformes), to the family of the Anatids (Anatidae), to the genus Cygnus and to the species Cygnus olor.

The name of the genus “cygnus” comes from the Latin “Cygnus or Cycnus” (derived from the Greek “kuknos”) son of Sthenelus, King of Liguria. Cygnus was inconsolably afflicted by his friend Phaethon demise (also Phaethon has given the name to a marine bird) and for this reason was transformed in swan.

In a second version, “Cycnus” (with the “c” in lieu of the “g”), son of Apollo, in a fit of rage and for avenging on himself the death of the homonym Cycus, Neptune’s son killed by Achilles, jumped off a cliff of the mount Teumessos and was transformed in swan.

The name of the species “olor” is a synonym of the Latin term “olor-oloris” rightly meaning swan.

It’s a monotypic species with Euro-Asian distribution. This is Nearctic, Austra- lasian and campese deriving form introduction. The actual reproductive area, influenced by numerous introductions, interests discontinuously most of Central Europe and the British Islands, areas of Central Asia, of North America, of South Africa, of South Australia and of New Zealand. In Italy, the species appeared in the past in winter and during the migrations; It has begun reproducing since the thirties and forties after introductions occurred in Switzerland and in Italy itself. On the Garda Lake, the mute swans have started reproducing since 1986. 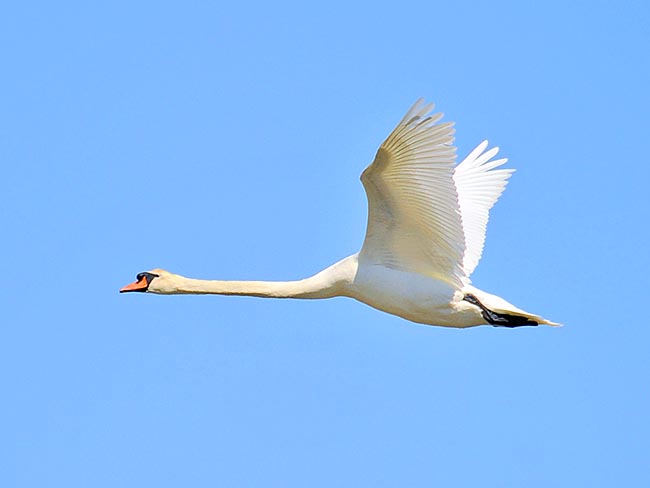 During the reproductive time it frequents inner extents of freshwater such as lakes, slow rivers and swamps but also humid zones of modest size, like small ponds and small water streams.

During such period, it also frequents coastal zones with brackish water usually not too deep: lagoons, estuaries, sandbars and fishing valleys.

Presently, the mute swan, also due to immissions done in different locations, reproduces fairly regularly in some lakes and along some water streams of the inner Padan Plain (in Piedmont, Lombardy, Veneto, etc.) and in some lagoons and rivers adjacent to the upper-Adriatic coastal belt (Venice, Grado, Marano lagoons, etc.) where was absent before or was just an occasional visitor.

The reintroductions-introductions have led the species to be common also in lesser water streams, artificial and also urbanized humid ambients.

The northernmost European populations perform migratory movements during the coldest months. In the southern areas, the species is mainly stationary moving in case of lack of food or of freezing of the waters.

There is knowledge of moulting migrations in calm areas, mainly coastal, with even numerous aggregations of not nesting specimens. 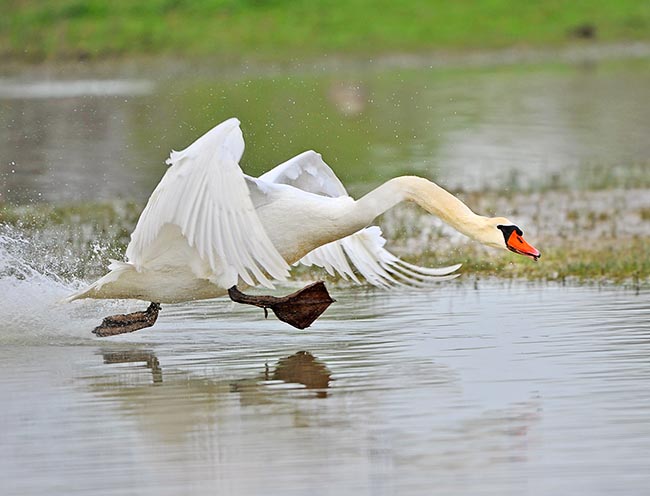 Due to weight and the departure ambient, the take off needs often much effort © Gianfranco Colombo

The mute swan is a wholly white swan (rightly known also under the name of “white swan”), big and heavy, with rounded head and usually curved neck in the classical posed postures.

The livery is completely white with, at times, rusty head and neck feathers.

Its total length is of about 140-160 cm, of which only the half interests the body.

The bill, long about 7-8 cm, is orange-reddish bordered of black the margins and around the nostrils; also the nail of the bill is black.

The lower rhamphotheca is more blackish. Bare skin at the base of the bill, forming a black triangle reaching the internal commissure of the eye, with a black dorsal protuberance (tubercle) more evident in the adults and in the male specimens.

The sexes are similar with the male generally bigger than the female. The tarsi are about 10-12 cm long and the feet are black. The iris is hazel-brown.

In nature, it distinguishes, at a short distance, from the Whooper swan (Cygnus cygnus) and from the Tundra swan (Cygnus columbianus) due to the colouration and the morphology of the bill and, when posed, to the neck relatively bigger and “S”-carried, with the bill facing downward. 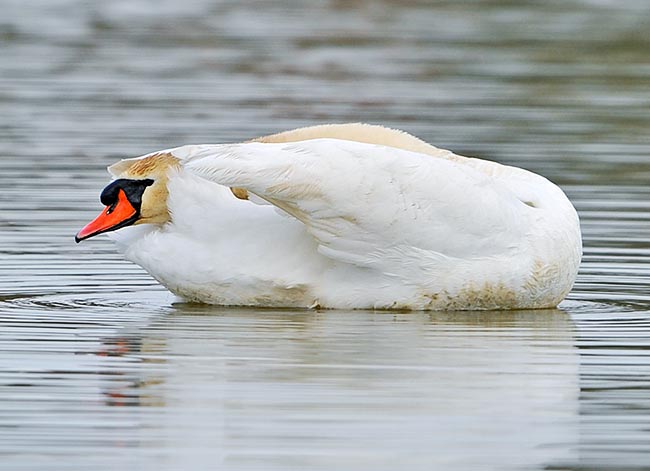 Conversely, after grazing aquatic plants, it spends most of the day sleeping © Gianfranco Colombo

The young has a brown-dirty general colouration (whence originated the tale of the “ugly duckling), not uniform, in the upper parts, and more greyish in the lower ones with possible presence of paler areas.

The tubercle is absent or only hinted. The bill is grey tending, gradually with the time passing, to pinkish and then to faded orange. The legs are grey tending to black.

During the first winter and the following spring, the plumage becomes gradually white even if it remains partly brownish up, till the second winter.

A leucistic mutation (Cygnus olor immutabilis Yarrell, 1838) does exist, called also “Polish mute swan” (detected for the first time from offspring of Polish swans or however present in Eastern Europe, even if not all authors agree), where the young appear already wholly white right away.

These specimens differ also from the adults because they are characterized by having paler legs (grey-flesh shaded instead of black) and, perhaps, by the slightly smaller size. It is not unusual to see, inside the same hatching, some white young and others brown, sign that the adults are carriers of the mutant gene. This mutation has been, in some areas, diffused by the man who has sometimes considered these specimens, already white since young, more beautiful. The percentage of leucistic swans, in the wild populations, seems to vary between the 1 and the 20% (but much more variable data do exist depending on the locations); being a mutation linked to the sex, more females are present. 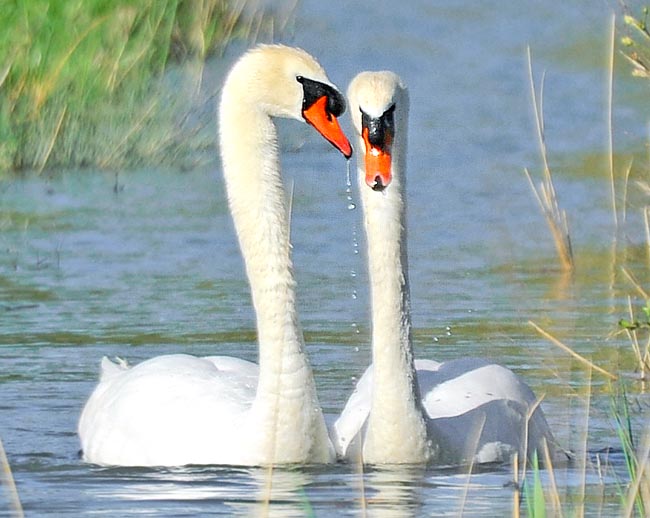 The smaller number of leucistic males appears to be related also to the fact that, not presenting the grey-brown livery, that inhibits the aggressiveness of the adult males, are more attacked and killed by the males who, seeing the white colouration, they consider these specimens (even if immature and young) already as competing adults.

There are reports also of cases where the infanticide seems to be more common towards the leucistic cygnets.

When flying, it keeps the neck extended forward and though not emitting vocalizations, the regular flapping of the wings produces a rather strong and easily heard rhythmic whistle as a consequence of the fast passage of the air through the margin of the primary remiges.

The vocalizations of the mute swan are basically vibrated grunts and usually not much noisy blows; that is why this swan is known under the name of “mute swan”.

It mainly nourishes in water immersing head and neck and, when in deep waters, raising the rear upwards, like the dabbling ducks.

In the wild it mostly nourishes of aquatic plants such as Potamogeton, Myriophyllum, Zostera, etc. and of algae such as Chara, Enteromorpha, Ulva, etc. It eats also grasses growing on the ground, especially along the banks, and food provided by the man such as grains, bread, etc.

The adult pairs usually form by the 3-4 (2) years of age onwards, are strongly territorial and defend an ample tract of land around the nest. 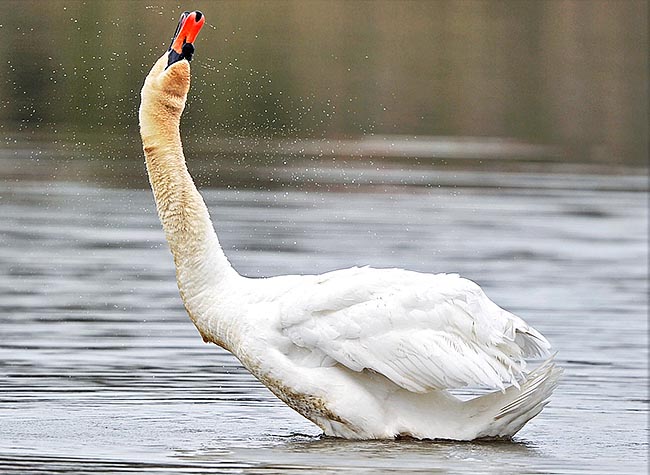 The attacks against possible intruders are greater by the male who assumes typical aggressive attitudes: very curved neck and the wings arched and raised on the back, swimming with the head almost leaning on the back and prominent chest with the secondary and tertiary remiges raised and simultaneous jerky movement of the legs, noisy flight obtained by flapping the wings and clapping the legs against the water surface.

Also for this species, though not frequent, has been described a “triumphal ceremony” which usually follows an attack and done raising the body on the water and flapping the wings.

The mute swan at times attacks also other species (especially if having white livery, such as gulls and herons), man included.

The species is widely monogamous with partners’ fidelity (but exceptions do exist) in natural conditions.

It nests from the sea level up to about 500 metres of altitude. Where the density of the species is scarce, the mute swan is more territorial; if the density of population is high, due to the great availability of food, they reach the point of nesting in colony or, however, in high density.

The coupling takes place in water, the pair does a pre-copulatory parade with movements of the head to the right and left (face to face), ritualized alimentation, immersion synchronous and overlapping of the neck, invitation to the copula done by the female with extension of the head and neck skimming the surface of the water and following mating with the male seizing the feathers of the nape of the female with its bill. 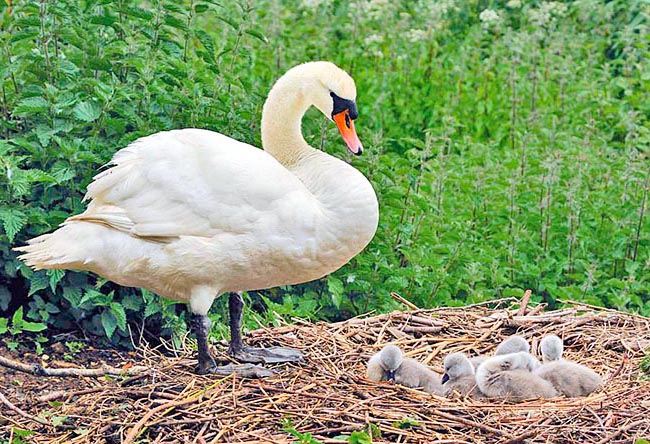 The nest is quite big. Usually 5-7 eggs are spawned at 2 days distance © Patrizia Ricci

After the copulation, the parade goes on with raising of the body (chest to chest and bill pointing up), movements of the head to the side and gradual return to the starting position, cleaning of the plumage.

Spawning begins usually from late March to April and continues up to May-June, particularly in the case of replacement hatchings.

Cases of even later spawning are known, particularly by subjects kept in captivity.

The nest is rather big and is formed by a mass of vegetable material: reeds, grass, leaves and parts of aquatic plants, algae.

The material is collected with the bill in the immediate proximity of the nest itself performing movements of a rather stereotyped look done with the head and the neck, by both sexes, from the water to the platform forming the nest.

The construction is quite variable in size, often in relation with the existence of tides, where higher nests are built, or with the degree of vegetation cover existing around the nest. In the platform-nest is present a cup (generally central) lined with little down when the eggs are there.

Sometimes the same nest is utilized again, after having been reset and “restored”, for various years. 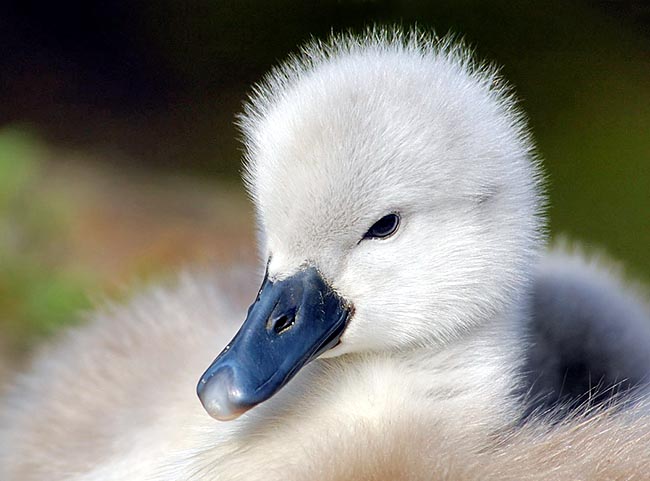 The eggs are of opaque pale green colour also with greyish or bluish shades. During the hatching, the eggs fade and become more yellowish-greyish.

The hatching begins once spawning is completed even if the parents stay
enough on the nest also at the beginning of the spawning.

The incubation lasts 35-36 days and is done by the female, who, during that period, feeds poorly, even if the male may cover the eggs for short periods; the male in any case does not have the incubating plaque.

The newborns have the upper parts of pale grey colour and the lower ones white.

The mute swan moults completely after the reproduction with simultaneous loss of the flight feathers. There is also a partial post-juvenile moulting.

The settled pairs reduce their territorialism out from the reproductive season and begin to send away the progeny by the end of the winter, before the next reproductive time. The juveniles and the not nesting adults are not territorial and tend to gather especially in winter. 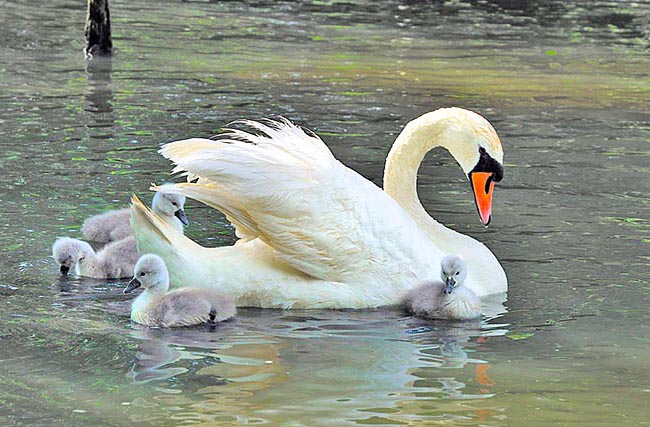 Mum with her "ugly ducklings", in contrast to the adults elegance, celebrated by artists © Patrizia Ricci

It is often impossible to clearly distinguish the wild populations from the domestic or semi-domestic ones also due to the rather confidant nature in the regards of the man, characterizing, however, the species. This confidence is favoured by a general favourable attitude of the man manifesting with projects of protection and immission of the species.

The most frequent causes of danger for the mute swan are: collision with overhead lines, lead poisoning (saturnism) after the ingestion of shotguns pellets and fishing sinkers, poaching, acts of vandalism.

The beauty of this bird combined with the elegance, the particular movements and postures, the fierceness and the strength characterizing it, have meant that this animal has become an important “subject” of artistic inspiration.