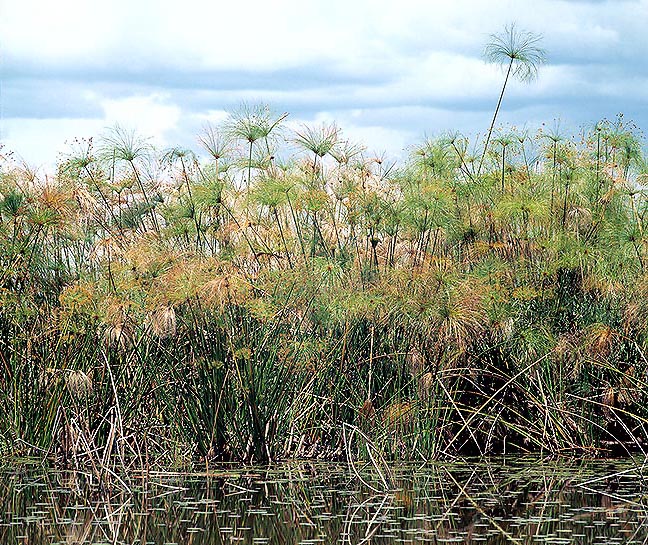 Cyperus papyrus in Uganda, in its habitat © Giuseppe Mazza

The plant is native to Africa (Angola, Benin, Botswana, Burundi, Chad, Congo, Democratic Republic of Congo, Ethiopia, Gabon, Guinea, Ivory Coast, Kenya, Liberia, Malawi, Mozambique, Namibia, Nigeria, Ruanda, Senegal, South Africa, Sudan, Tanzania, Uganda and Zambia) and to the Indian Ocean islands (Madagascar, Mauritius and Reunion), where it grows anchored to the ground on the banks of the waterways, of the lakes and in swampy areas constantly wet, forming dense patches of vegetation, as well as floating plant.

The only location in Europe where it is present, even if not autochthonous, as per most of botanists’ opinion, but introduced in remote times and then naturalized, is Sicily, where it is still present in the area of Syracuse.

The name of the genus comes from the Greek “kypeiros”, used by Theocritus and Theophrastus; the name of the species is the Latinization of the Greek name “papyrus”, of possible Egyptian origin.

The Cyperus papyrus L. (1753) is a perennial aquatic herbaceous plant, monocotyledon, cespitose, with short, thick horizontal rhizomes, and a vast radical apparatus; it has stems (culms) with an almost triangular section, erect, 2-5 m tall and broad, at the base, up to about 6 cm, smooth, full of a spongy tissue (aerenchym) where are present large intercellular spaces which facilitate the air circulation, in order to carry the oxygen to the submerged parts. It has basal leaves without lamina, up to 20-30 cm long of a reddish brown colour. Compound inflorescences at the apex of the stem, hemispherical, formed by 4 to 10 linear bracts similar to leaves, of reddish brown colour, 5-15 cm long, and 40 to 100 arched or hanging “rays”, filamentous, 10-30 cm long, with at the extremity, by late summer, brown-green spikelets 1-2,5 cm long. The fruits are 1 x 0,5 mm, oblong achenes, of pale brown colour. It reproduces by seed and very easily by division at the end of winter.

Of rapid growth, it stands among the most ornamental aquatic plants, is cultivable in full sun, or at most, under slight shade, in the tropical, subtropical and, marginally, warm temperate climate zones; just below 0° C temperatures destroy the aerial part, at the level of the rhizome it may however bear some degrees less, if well mulched or in water, and the plant is then capable to grow up again in spring. Due to its dimensions, it needs space in order to emphasize its ornamental characteristics, when placed in water or on the borders of water surfaces, as well as inside a garden. The papyrus sedge, as ornamental plant, may be, in fact, placed, besides in water, or in a constantly wet ground, also in full earth on a sandy and rich of humus substratum kept adequately wet, in which case, however, the height of the culms will be less than that which may be gotten when in water. If utilized in small pools, it is better to keep it in submerged pots for controlling its growth, as it might quickly choke any other form of vegetation. When in pot, its is appreciated for spacious indoors decoration, greenhouses and verandas, in much luminous position, utilizing a substratum with addition of sand or other inert materials and kept constantly humid, for instance placing the pot in a container with some water permanently on its bottom, and at temperatures which is good to keep over the 12-14° C.

The papyrus sedge, as well known, has a long history and a fundamental importance in the progress of the civilization, symbol of the kingdom of the Lower Egypt (about 5000-3000 B.C.), and its name is connected to the realization of the writing material with the same name realized by the old Egyptians. The first description of the proceeding for its realization is due, in its general lines, to Pliny the Elder (23-79 A.C.); the inner part of the culms was cut in stripes which were placed longitudinally, one by the other, on these was over posed vertically another series, then, pressed and dried up in the sun, were forming the support on which to write and paint.

From Egypt, the use of papyrus spread in Greece and in the Roman Empire and remained in use almost till the X century, progressively replaced by the paper obtained from the maceration of the rags or vegetal materials. Even if papyrus sheets of good quality are nowadays realized in Syracuse, the procedure formerly used is still now not completely known in all its particulars.

In the old Egypt, the papyrus was not only utilized for making sheets for writing, but also for building boats, and the external side of the culms, cut in strips, was utilized for creating ropes, known for their resistance, sandals, baskets, mats and other fabrics. The plant, since some years, is also object of study for its high capacity to remove polluting substances from the waters.

→ To appreciate the biodiversity within the CYPERACEAE family please click here.