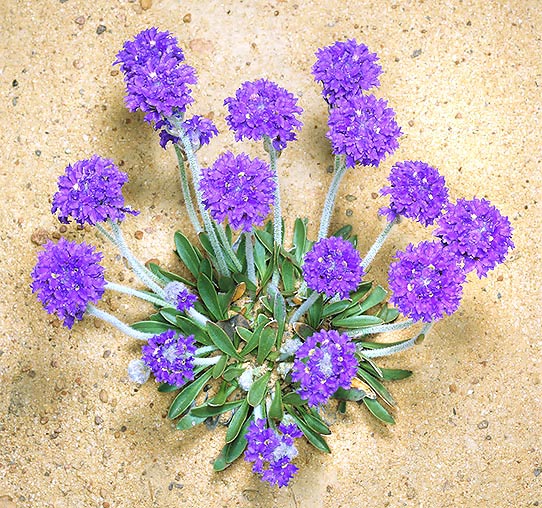 This plant is native to south-western Australia, where it grows on sandy, stony and clayey soils in thin woods or in areas characterized by rich and low vegetation, locally called kwongan, with highly seasonal climate with mild and little rainy winters and warm and dry summers; with frequent fires which play an important role on this type of vegetation.

The genus is honoured to the English navigator William Dampier (1652-1715), who had the merit of carrying to Europe the first Australian plants he collected in the north-western coast; the species is dedicated to the botanical collector, Mrs. Julia Wells (1842- ?).

The Dampiera wellsiana F.Muell. (1876) is an evergreen, herbaceous and stoloniferous plant, 5 to 30 cm tall, which, with the time, forms even more than 2 m broad clumps.

The rosette leaves are spatulate with entire or crenulated margin, thick, of an intense green colour, 2 to 8 cm long and 1 to 4 cm broad on an about 6 cm long petiole. The 8-10 mm long flowers, with thin, pale to dark blue lobes, are united in thick inflorescences, terminal and globular, on an about 30 cm, and even more, tall tomentose scape.

The fruits are ellipsoidal, about 2 mm long, containing one seed only, covered by down; the fructification is particularly abundant after a fire.

It reproduces by division or by seed in a constantly humid, but without stagnations, substratum, with at least the 50% of coarse siliceous sand or agri perlite, at the temperature of 20-24 °C. It is a rather little cultivated plant, but by sure promising due to its characteristics which render it suitable for desert and rocky gardens. It may be cultivated in full sun or in slight shade, on acidic, sandy and/or stony soils, provided particularly draining, in the tropical, subtropical and warm temperate zones, especially in the Mediterranean type ones, with the climate characterized by marked seasonality, with poorly rainy winters, and warm and dry summers; it may resist, when dry, to temperatures of about -3 °C for a short time.

It is cultivable also in pot, always respecting the aforementioned exigencies, especially the watering, in winter, must be spaced, allowing the substratum to dry up before giving water again, and reduced in summer.