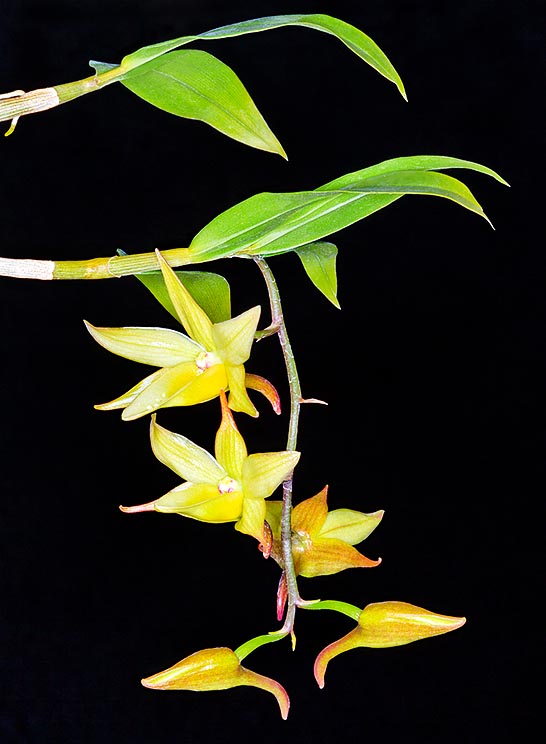 The species is native to Borneo (Kalimantan and Sabah) where it grows as epiphyte on the trees of the humid forests, on the most exposed branches, at low and medium altitudes.

The name of the genus is the combination of the Greek substantives “δένδρον” (dendron) = tree and “βίος” (bios) = life, with reference to the numerous species of the genus living on the trees; the name of the species is the combination of the Greek substantives “κύμβη” (cymbe) = cup shaped like a small boat and “γλῶσσα” (glossa) = tongue, with reference to the shape of the labellum.

The Dendrobium cymboglossum J.J.Wood & A.L.Lamb (1994) is an epiphytic species with thin pseudobulbs, of about 0,6 cm of diameter, initially erect, then curved or drooping, 40-50 cm long, provided in the second half of alternate leaves, distichous, oblong-elliptic with pointed apex, 5-8 cm long and 1,6-2,5 cm broad.

Racemose inflorescences from the upper nodes, hanging, carrying 5-9 flowers of 3-4 cm of diameter usually of pale yellow colour at times suffused or veined in pink. Oblong dorsal sepal with pointed apex, 2,5-2,8 cm long and about 1 cm broad, triangular lateral sepals, of about the same length as the dorsal, merged at the base of the column forming a sort of a long conical curved spur (mentum), oblong petals with pointed apex, about 2,5 cm long and 1 cm broad, oblong labellum 2,5 cm long and 0,9 cm broad. The flowers last 10-14 days. It reproduces by seed, in vitro, division, to be done at the vegetative restart, with each section provided of at least 3-4 pseudobulbs, and through the young plants that possibly form at the nodes (in jargon “keiki”, which, in Hawaiian means “sons”), that may be removed when they have formed a good rooting apparatus.

Species discovered and described by the end of the XX century, and still now rare in cultivation, requires high luminosity, also some hours of direct sun in the morning, medium-high temperatures, 24-35 °C in summer, 15-26 °C in winter, high and constant humidity, 70-85%, with air constantly moving. Frequent waterings during the vegetative period, more spaced in winter, but without ever getting the pseudobulbs too wrinkled, utilizing also for the nebulisations rainwater, demineralised or by reverse osmosis. Fertilizations, during the growth time, duly alternated with the waterings, using preferably hydrosoluble balanced products, with microelements, at ¼ of the dosage suggested by the producer. It can be cultivated in pots or baskets, even suspended, seen the habit of the plant, with draining and aerated compost that may be formed by medium sized bark of coir fragments, with possible addition of inerts for improving the drainage, or mounted on trunks, bark, rafts of cork or of arborescent ferns. The repottings, when necessary, are to be done at the vegetative restart marked by the appearance of the new roots.

To appreciate the biodiversity within the family ORCHIDACEAE and find other species, please click here.