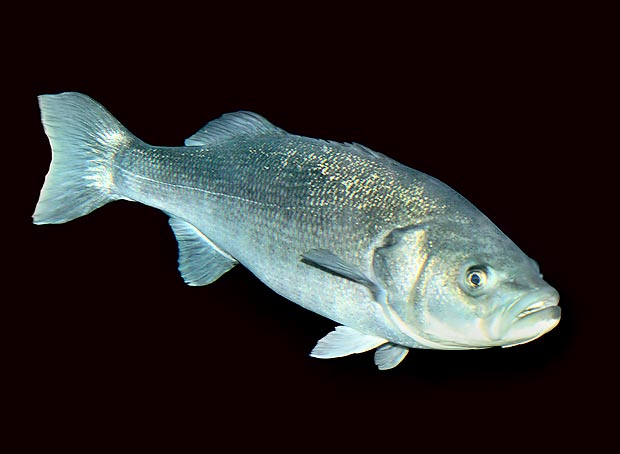 With the Italian names of Spigola, Branzino, Ragno or Pesce Lupo (Dincentrarchus labrax), depending on the Italian regions, is identified a sea bony fish of the genus Dicentrarchus, family the Serranids (Serranidae), order the Perciforms (Perciformes).

They are fishes with very tasty flesh, even less known than what commonly thought, in any case object of the attention of the fishing industry; recently, in order to avoid the rarefaction of the populations, they are trying also, successfully, the breeding in fish farms.

The European bass (Dicentrarchus labrax) is common all over the Mediterranean Sea and in the north-eastern Atlantic, from the African to the Norwegian coasts.

These fishes are always hungry. Little demanding about the alimentation, they nourish of other fishes as well as of plants, molluscs, small cephalopods and crustaceans. The Seabass frequents chiefly the coastal waters and the harbours, entering willingly and often the mouths of the rivers, where it may go upward for a long distance, being perfectly (like some species of elasmobranchs, see text Pisces), “euryhaline”, that is tolerating (without suffering from the strong variations of salinity) waters with different salinity, by means of the hematic retention of the right concentration of urea. Another environment where they are easily found is that of the ponds and brackish lagoons.

Even one metre long and weighing up to 14 kg, the seabass has a fairly slender body shape; the trunk is elongated, slightly compressed on the sides and ending in a quite expanded caudal peduncle, covered by rather big “ctenoid” scales. The head is medium size, the jaw is prominent (prognathic) and the teeth are well developed and thick, placed in an ample mouth surrounded by fleshy lips. Typical is the gills operculum, with two uneven spines along the back border close to the mid, whilst the preopercle carries on the margin a thick serration.

The Seabass may be easily recognized from the other Serranids (Serranidae) of our waters, due to the presence of two contiguous dorsal fins. The first is supported by thorny rays. The pectoral, not big, are elongated as well as the ventral ones, which insert just under them, a little back. The anal has almost the same development of the second dorsal, to which is opposed; the caudal, the most developed, has pointed lobes and the back edge remarkably concave. Basically, the colour of these serranids is dark greyish on the dorsal parts and lighter on the sides of the body, whilst the inferior parts are silvery-white. The even fins are yellowish. Several, little evident, small spots are however present on the sides of a big dark spot, which is visible also ob the back part of the operculum.

The reproduction period corresponds to the warmest summer months. By that time, the seabass get even closer to the coasts, at times entering also the lagoons, for laying the eggs which fall down on the seabed. The embryonic development is extremely rapid, as well as the growth of the fry, which, in autumn, are so much developed to be already able to follow the adults, which are going back on the high seas for nourishing.

Due to their white, firm and tasty flesh, they are object of fishing during the summer, with lines or nets. As this coincides with the reproductive period, the institution designed to monitor fishing imposes their catching at alternate seasons, in order to avoid their rarefaction.

The vulnerability index of this species is of 49 over 100.