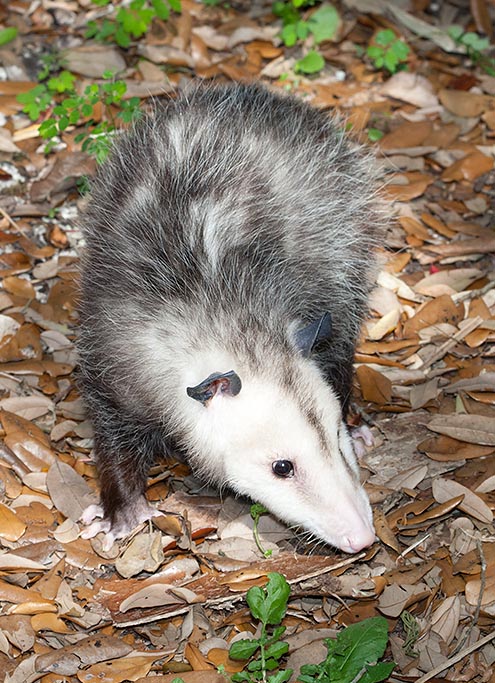 The Didelphis virginiana is an American marsupial © Giuseppe Mazza

With the lemma “opossum”, the biologists commonly designate various genera and species of marsupials afferent to the families of the Phalangerids (Phalangeridae) and of the Didelphids (Didelphidae), but the term, meant in a narrower sense, is specifically referred to the last ones, which, with the family of the Canolestids, or Caenolestids (Caenolestidae) do form the only group of marsupials not endemic to the Australian continental block, being, on the contrary, endemic to the New World.

In light of the above, we refer in this sense only the opossums afferent to the family of the Didelphids (Didelphidae) and, in the specific of this text, to the Didelphis virginiana.

As mentioned before, the opossums of the didelphids, along with the members of the caenolestids, are the only American marsupials, however, the members of the genus
Didelphis stand amongst the marsupials going more to the north, and so they are found in the northern as well as in the southern part of the American continent.

In the specific, the Virginia opossum (Didelphis virginiana) is diffused in Central America, but extends its distribution area also to the north, up to the Atlantic coast of the state of New York, passing though Texas, Florida, and has been introduced by the human beings also in the state of California.

The opossums carry on mainly a crepuscular or nocturnal life, spending most of their existence among the branches of the trees, proving very agile in the movements inside the entangled plants, whilst, when on the ground, where they get rarely only in case of need, or because they fall down there, they move trotting hardly on their short legs.

The alimentation is fairly various. Without any doubt, it may be defined as a carnivore, and this applies also for the other species. But if the bigger specimens may show predating phenomena, preferring animal substances like small vertebrates, fishes, arthropods and insects, and the small ones nourish essentially of vegetal essences.

Historically, this animal has been hunted by the settlers by using dogs specifically trained for this purpose, in order to stop the carnages it was doing in the chicken coops and in the rabbit’s hutches, with ferocity not inferior to that of a marten. Despite such persecution, for the moment the IUCN identifies its “status” as at low risk, that is, LRIc (Low Risk). 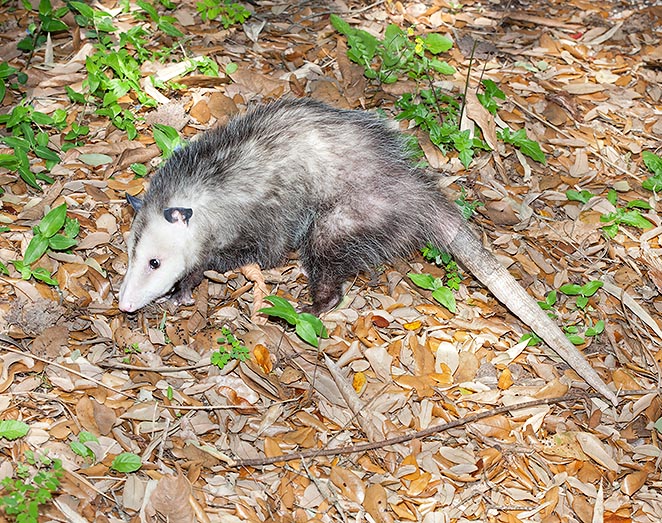 75 cm long it's the largest Delphid, but almost half length concerns the prehensile tail © Giuseppe Mazza

The opossums of the various species (called also possums), as members of the Didelphidae, have common morphological lines.

They have a size varying between that of a cat and that of a rat, with the tail usually as long as the head and the trunk together. This is usually glabrous, at least for most of the length, covered, like that of the rats, by strong scales and most often provided with a prehensile grasp.

The small snout is pointed and the ears, rather big, are glabrous too.

An unusual characteristic is the absence of the nail at the first toe of the hind limbs, which, on the other hand, is opposable to the other toes, and so also the foot is a solid prehensile organ.
The paws of the opossums are rather short, with five toes on both pairs.

The dentition, like all marsupials, includes a great number of elements, fifty in the whole, that is, on both jaws, two canines, six premolars and eight molars, whilst the incisors are ten in the upper jaw and only eight on the mandible.

The marsupium, exclusive to females, it appears perfectly shaped, with the marsupial pouch opening on the front, but in some species this is only rudimental or not complete or may be completely absent. The teats are usually thirteen (for instance in the opossums in the strict sense), placed in series of six per side and with one in the middle.

In the specific, the Didelphis virginiana is a three quarters of a metre long animal (it is the largest marsupial of the family of the Didelphidae), where little less than a half belong to the tail.

It weighs from 7 to 9 kilos and, as an average, it lives about three years in the wild, whilst when captive it may reach the 5-6 years. 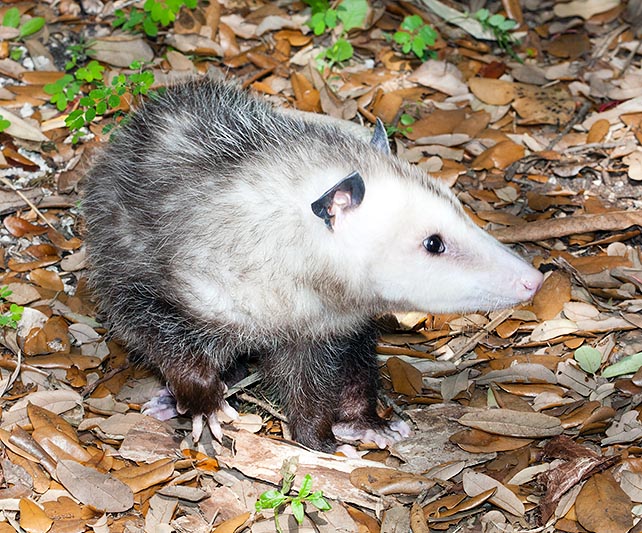 Palaeontologically, this marsupial should come from South American progenitors, that, in the Pliocene, about 3 million of years ago (during what the biologists define “The Great American Exchange”, that is a migration of entire faunistic groups from the South to the North America and vice versa), they have moved into the northern America.

The overall characteristics do not differ, obviously, from those of the family they belong.

The fur is quite pale grey and very soft and long, therefore it is sought for in the fashion field; this has led the man to create, as done for the chinchilla or for the mink, some farms for such purpose.

The Virginia opossum is provided of a complete marsupial pouch.

The term identifying the family of the Didelphids (Didelphidae), comes from the fact that these marsupials have two vaginas, two uteri and two oviducts, in contrast to the placental mammals Eutherians (Eutheria where are present one vagina, one uterus and two oviducts. The incubating pouch or complete marsupium, serves to complete the embryonic development, seen that the intrauterine gestation is very short, lasting a maximum of two weeks and the young are delivered when still extremely immature.

When a Virginia opossum, while facing a danger, realizes that there is no way to escape, abandons itself inert on the ground, playing dead. The predator is bewildered, and as soon it gets distracted, our animal rapidly runs away. After some biologists, this behaviour in reality should not deemed only as a form of shrewdness, but a real and proper transitory nervous collapse without collateral effects. A similar phenomenon is observed in various races of sheep and goats.

The opossums having an incomplete marsupium are those afferent to the genus Philander, such as the Woolly opossum of Central America (Philander laniger).