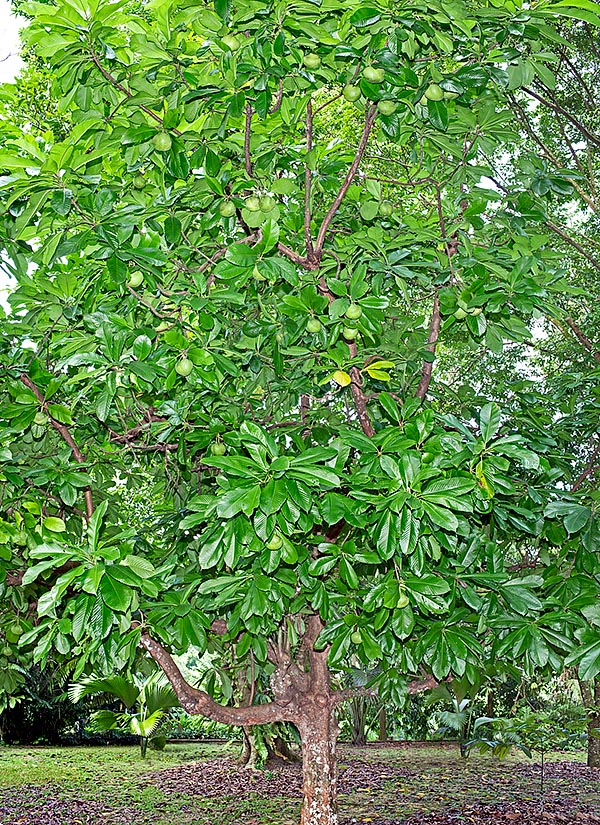 This plant is native to China (Yunnan), India, Indonesia, Malaysia, Sri Lanka, Thailand and Vietnam, where it grows in the humid evergreen forests mainly along the banks of the rivers.

The genus is honoured to the German botanist Johann Jacob Dillen (Latinized in Dillenius), (1687-1747); the Latin name of the species “indica” = of India, refers to one of its origin places.

The Dillenia indica L. (1753) is an evergreen or semi-evergreen tree with a roundish crown, tall up to about 25 m with a reddish brown smooth bark which tends to flake off; the young branches are tomentose. It has intense green coloured leaves, glossy on the upper side, alternate, usually grouped at the apex of the branches, of elliptic-oblong or obovate-oblong shape, 15-40 cm long and 7-14 cm broad, with prominent parallel lateral nervations and indented margins; the 2-6 cm long petioles are grooved and pubescent at the base.

The flowers are solitary, terminal, hanging on an about 8 cm long peduncle, great up to about 20 cm of diameter, with five roundish sepals, concave, thick and fleshy, 4-6 cm long, of a pale green colour. The corolla, formed by five white obovate petals, 7-10 cm long and 6-8 cm broad, surrounds several yellow stamina which form a compact mass on which stand out the white lanceolate styles, radially placed and about 2,5 cm long.

The fruit is an aggregate fruit with a diameter of 5 to 15 cm which comes from the enlargement of more ovaries, 15-20, with persistent fleshy sepals, indehiscent (it does not open when ripe), with 5 or more, reniform, of brown colour, seeds per each ovary. It easily reproduces by seed, which germinates in about one month at 20-25 °C, and by cutting; when by seed, the first fructification takes place after 8-10 years.

Very ornamental plant for its foliage, the great and perfumed flowers and the globular fruits, it is often utilized as shade tree in parks and gardens. It may be cultivated in the tropical and subtropical climates zones, with low temperatures which are not to be less than +10 °C, even if it may survive, for a short time, at temperatures close to the -2 °C. 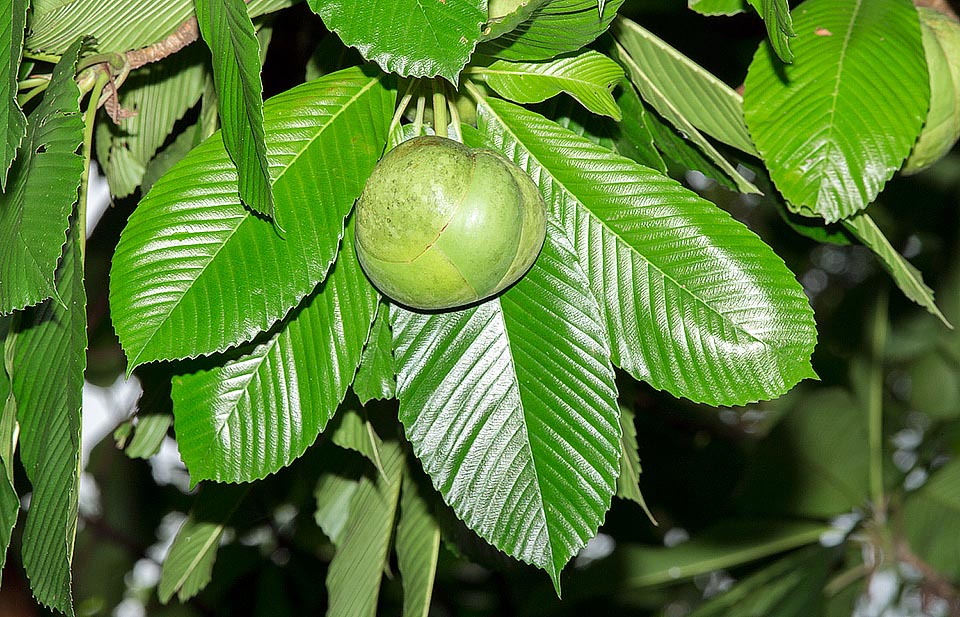 Leafy and ornamental tree with perfumed flowers, frequent in the tropical gardens. The leaves, bark and fruits have medicinal virtues © Giuseppe Mazza

It prefers sandy, neutral or acidic, maintained wet, soils; if kept dry in winter, it may loose the leaves.

The fleshy sepals, with a pleasant acidulous flavour, are consumed raw or cooked, or utilized for preparing preserves and jellies and for aromatizing the curry; also the fruits are consumed, even if in lower quantity and mostly cooked, as they have a decidedly acidulous taste; they are slightly laxative, so it is better not to abuse of them.

The leaves, the bark and the fruits are utilized in the traditional medicine especially as anti-inflammatory; the juice of the fruit is utilized for preparing cough syrups and, blended with water and sugar, for reducing the fever, the bark for poultices for the arthritis. 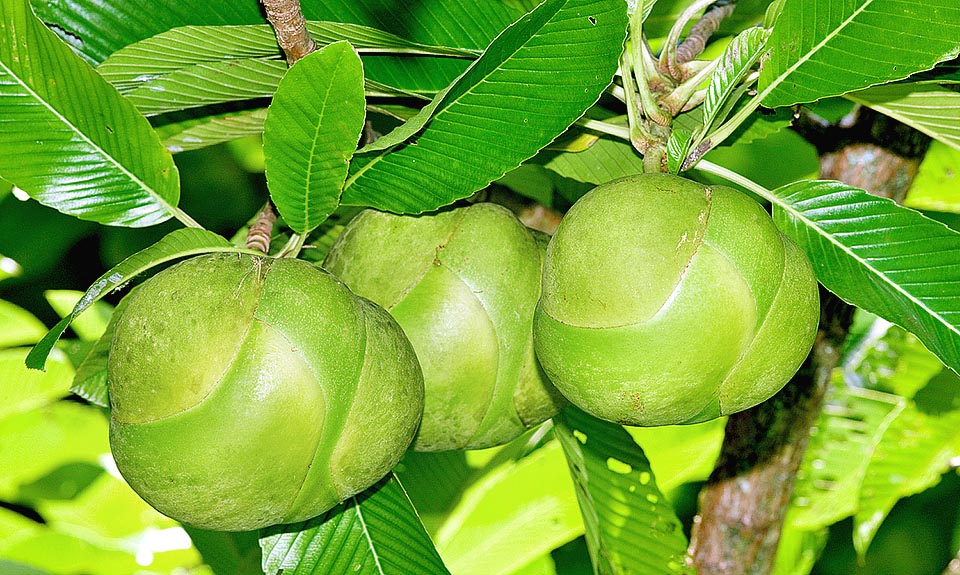 The fruits, pleasantly sourish, have even 15 cm of diameter. They come from the enlargement of 15-20 ovaries with persistent sepals © Giuseppe Mazza

Laboratory studies have evidenced also an anti-leukaemic activity of extracts from the fruits, due probably by the presence of betulinic acid. The wood is compact and durable and has a moderate utilization in the buildings and for fabricating cages, plywood and other objects.

→ To appreciate the biodiversity within the DILLENIACEAE family please click here.