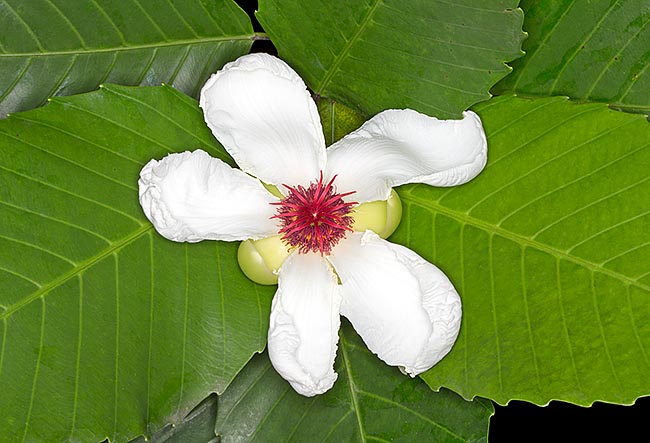 The species is native to the Philippines where it grows in the humid forests, at low and medium altitudes, often along the river banks.

The genus is honoured to the German botanist Johann Jacob Dillen (latinized in Dillenius) (1687-1747); the Latin name of the species “philippinensis” = of the Philippines refers to the country of origin.

The Dillenia philippinensis Rolfe (1884) is an evergreen, 6-15 m tall tree with erect trunk with smooth or slightly fissured bark of reddish brown colour.

The leaves are simple, alternate, coriaceous, elliptic or oblong-ovate with pointed apex, toothed margins and prominent parallel lateral nervations, 10-25 cm long and 6-12 cm broad, of intense green colour; the 3-5 cm long petiole presents semi-elliptic caducous stipules, up to about 1 cm broad, initially green then brown before the fall. Racemose inflorescences, on 5-15 cm long peduncle at the axil of the upper leaves, carrying 1-2 flowers of 10-15 cm of diameter with five roundish sepals, three internal long and broad about 2 cm and two external slightly smaller, concave, thick and fleshy, of green colour.

The corolla, formed by five white obovate petals, ephemeral, 4-6 cm long and 2-5 cm broad, surrounds two distinct rings of stamina, the outer ones, more numerous, stretched, about 1 cm long, are red in the upper half and yellow in the lower one, the inner ones, less numerous, 1,5-2 cm long, or purple colour, are adjacent to the red carpels. The fruit is an indehiscent globose syncarp formed by more accreted carpels fused together, of 5-6 cm of diameter, wholly enclosed by the persistent sepals; each carpel contains 1-5 brown blackish seeds, 0,5 cm long and 0,3 cm broad, with aril at the base, dipped in gelatinous pulp. 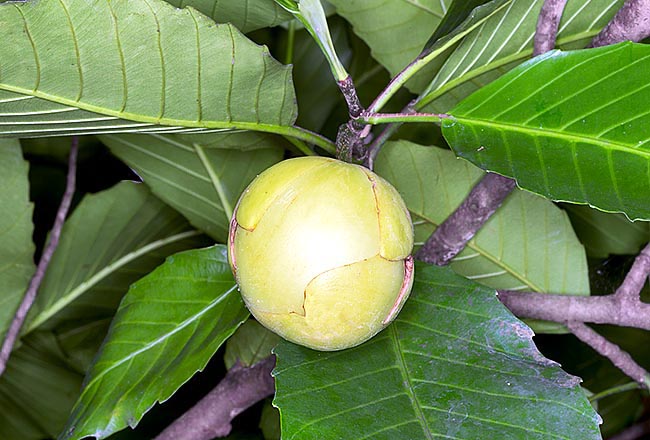 It usually reproduces by seed in organic loam with addition of sand or perlite per a 30%, kept humid, at the temperature of 24-26 °C.

It is a rather rare species in cultivation outside the origin zone, but of great ornamental and landscape value for the foliage as well as for the large flowers, cultivable exclusively in the tropical and subtropical climate zones in full sun or slight shade on soils kept almost constantly humid.

Utilizable in parks and gardens as isolated specimen or in group or as street tree; where the climate does not allow the continuous permanence in open air it can be cultivated in capacious containers for the decoration of greenhouses and winter gardens with lowest winter temperatures of more than 15 °C; the watering must be regular and abundant in summer, spaced in winter, allowing the substratum to partly dry up, and the fertilizations, during the vegetative period, done with balanced products with microelements. The fleshy sepals, with sour taste, are consumed raw or cooked, or utilized for preparing sauces and jams, the juice is used for preparing syrup for the cough whilst the buds and the flowers are used for aromatizing the fish soups.

The wood is amply used in the constructions for floors, ceilings and frames, for furniture and everyday objects; finally, a red dye is gotten from the bark. The International Union for Conservation of Nature (IUCN) has placed the species in the red list of the threatened species in danger of extinction as “vulnerable”.

→ To appreciate the biodiversity within the DILLENIACEAE family please click here.