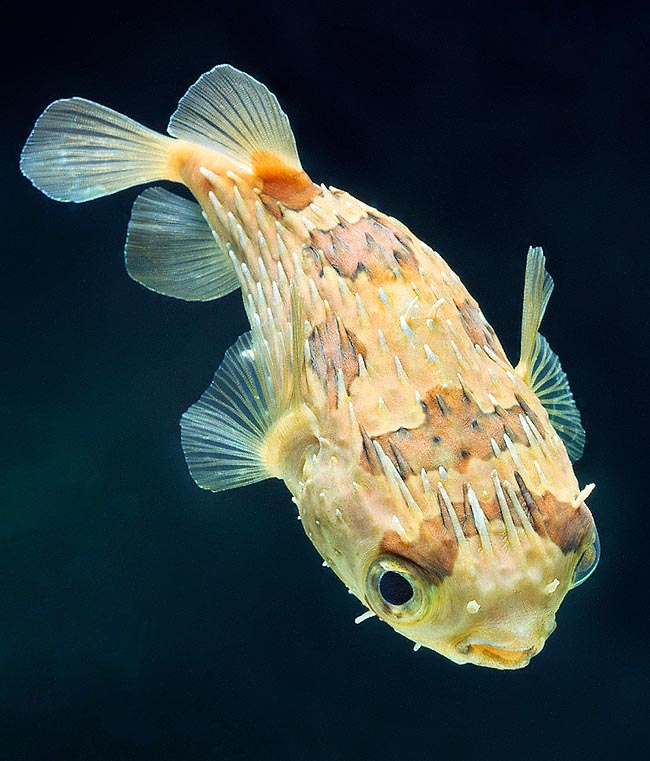 Known as Balloonfish or Long-spineporcupine fish, the Diodon holocanthus Linnaeus, 1758, belongs to the class of the Actinopterygii, the ray-finned fishes, to the order of the Tetraodontiformes, and to the family of the Diodontidae, counting presently 7-8 genera, after the various authors, and about twenty species.

The name of the genus Diodon comes from the Greek “δίς” (dis) = two and “ὀδοντο” (odonto) = tooth, with the reference to the fact the two incisors, still present in the Tetraodontidae, during the long course of the evolution have merged in one only tooth on both jaws forming a sort of beak.

The name of the species holocanthus comes always from the Greek “ὅλος, ὁλο” (holos) = all and “ἄκανθα” (akantha) = spine, with clear allusion to the spines present over all its body.

It is practically a pantropical species. As an indication, we find it from Florida, Brazil, and the Caribbean up to the African coasts and then going up from South Africa to Somalia and eastwards in India, Malaysia, Indonesia, Philippines, Japan, Australia and all Oceania to finally reach Ecuador and Chile.

The Diodon holocanthus is frequent in the coralligenous formations between 2 and 35 m of depth, but can go down up to 200 m. It swims along the rocky coasts, in the submerged grasslands, close to the estuaries and in very shallow waters among the roots of the mangroves rich of molluscs. Shy and solitary, but at times even in dense groups, flees from the sight of the divers.

With the evolution, the scales have transformed in erectile spines and like the other Diodon it can gulp down air or water, depending on the cases, transforming in a spiny vagrant ball difficult to grab.

The livery is clear, like golden sand, with irregular dark brown blotches having a mimetic function, such as the well marked one crossing, camouflaging them, the big protruding eyes, an often used trick in the world of the fishes to confuse the predators. 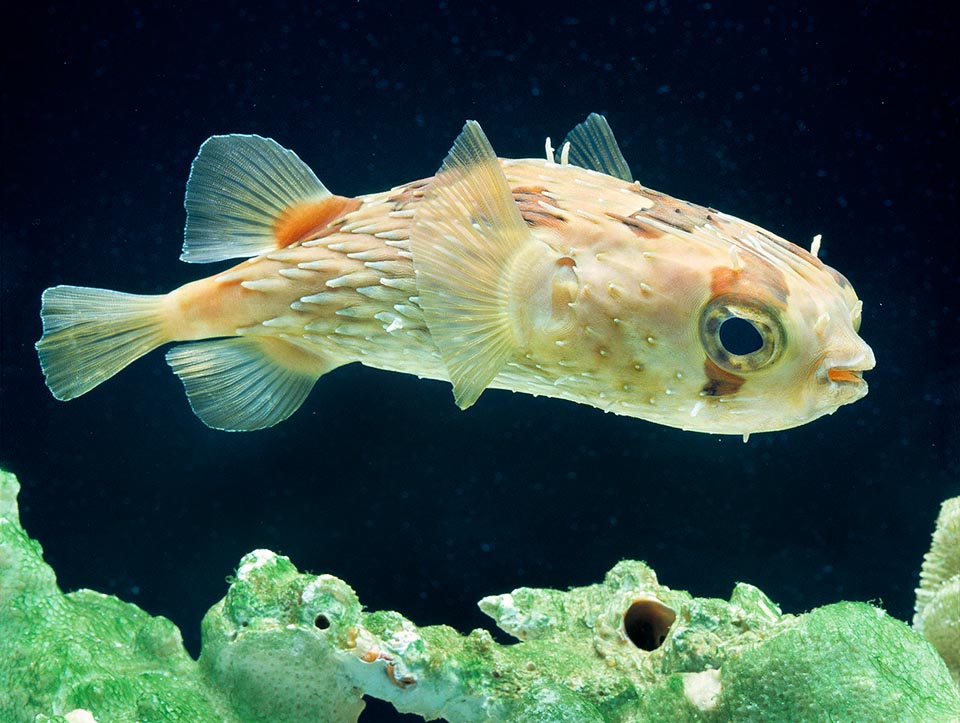 Usually 30 cm long, it has a mimetic livery and several spines scattered on the body that stand up when the fish inflates, in case of danger, gulping water or air © G. Mazza

It distinguishes from the analogous Diodon hystrix, having no black band on the eye, also for the absence of dark blotches on the fins.

Like the other membres of the family it is offered in the fugu, typical Japanese dish, by skilled surgeon cooks, though imbued, especially in the ovaries and various internal organs, of tetrodotoxin, a very poisonous and lethal substance even for the man because it blocks the breathing. There are no antidotes and the only remedy, apart causing the patient to vomit, if he still has some food in the stomach, is the mechanical ventilation.

Besides the crustaceans it sights on the bottom and the bivalves it finds in the sand, crushed with the two teeth solid beak, the Diodon holocanthus nourishes of sea urchins, polyps of madrepores and other benthic invertebrates.

Once they have reached the adult size necessary for the reproduction, usually around the 30 cm, the females hatch floating spherical eggs, immediately fecundated by the male on duty. They abandoned to the oceanic currents and may cover even big distances during the 4 days of incubation, like the larvae carried by the waves and protected, for about ten days, by a thin shell that disappears as soon as the first spines show up. And it is thanks to this pelagic reproduction that a little a time the species has colonized the whole world. 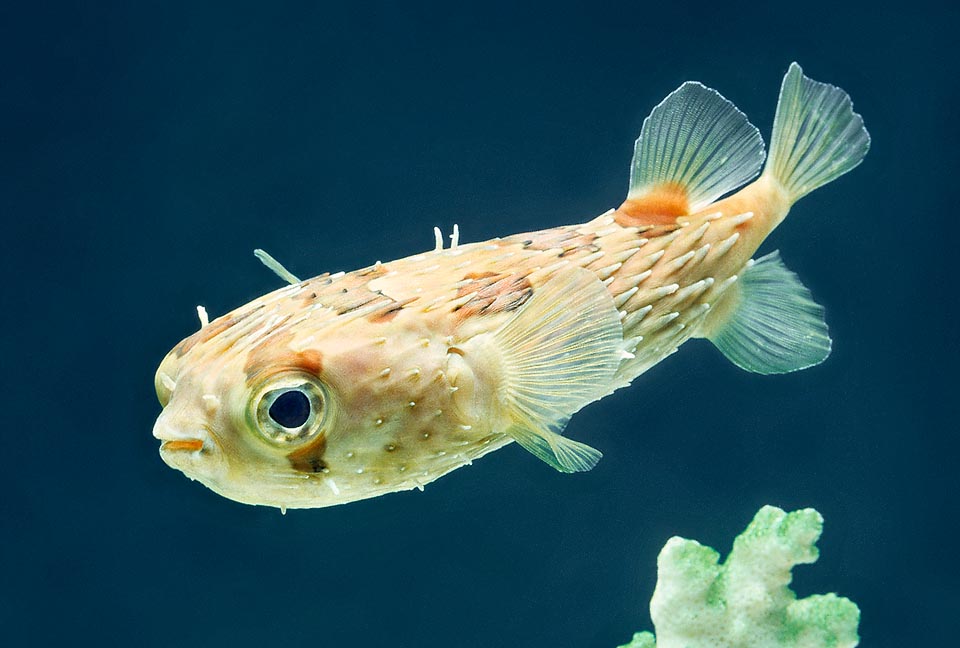 It has a powerful poison, the tetrodotoxin, that blocks the breathing. Cause of death also for the man, if badly prepared in the fugu, typical Japanese dish © Giuseppe Mazza

The larval livery, yellow with red small dots, disappears by the end of the first month of life, when the small fishes begin to get the colours of the adults. The teeth form and the fins come but the young remain pelagic for a long time growing hidden among the drifting sargassos that offer them food and shelter. Then, when they reach the 7 cm, they approach the coasts and go down towards the bottom looking for a more substantial food.

When young this species is predated, apart the birds, by tunas and dolphins, whilst the adults are attacked by the sharks.

Apart from few catches for the aquarium market or for the fugu, see, its capacity of doubling the populations decimated by the events in less than 15 months and the vast distribution of the species the vulnerability index of the Diodon holocanthus is presently (2019) moderate, marking just 27 on a scale of 100.