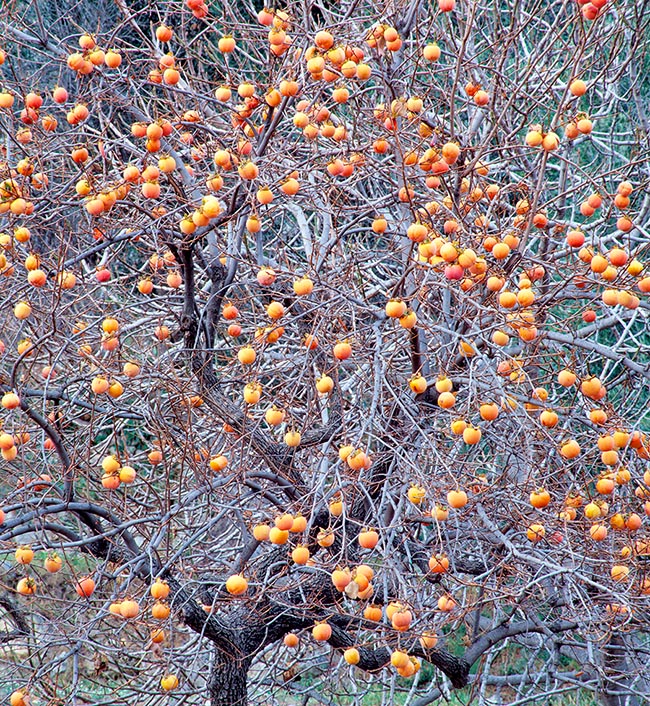 To the botanic family of the Ebenaceae belong deciduous trees which can reach a size of up to more than 12 meters.

The wood, very valuable, is utilized in joinery and in particular precision sports equipments, such as the golf clubs.

The green-grey colour predominates in the barks, either glabrous or velvety.

The gemmae are isolated. Some of them have leaves, others, called mixed originate at the same time flowers and leaves.

These are simple, oval, and get showily coloured in autumn, with a vast range of reddish, yellow and orange tones.

The flowers, green at the base, have yellow petals united on the bottom, forming a bell which reaches the 16 mm of length in the female corollas. The male ones are smaller, often grouped in groups of three at the node of insertion.

But more remarkable due to their important organoleptic value are the fruits of the genus Diospyros , which counts the various species with berries, among which the Kakis (Diospyros kaki Thunb., 1780).

“Diospyros” in Greek means “food of Jupiter”, a delicacy, in a word, kept for the gods, or, if we prefer, in the current language, a fruit with a special taste.

But the precious properties of this species render it even more interesting. First of all, we find fruits with high contents of tannins.

That pungent taste which pastes our mouth when we bite an unripe kaki is due to the tannins adhering to the glands of the tongue and of the palate, and it is thanks to this that the tissues of the fruit are firm and resistant during its growth stages. Only when they degrade, ripening, the fruit is ready to be eaten.

But apart this type of kakis, there are others, crisp, which can be picked from the tree and eaten like an apple, which, incidentally, remind for several characteristics and the type of thin peel. They belong to the group of the non astringent, and have, rightly, the name of apple-kakis, with reference to their look and by sure not to the genetics of one or the other species.

In both groups of kakis, astringent and non, we find fruits of different shape, elliptic, round, flattened, pointed, etc. At a parity of form we have many variants of colour, from the yellow, through several tonalities of pink, to the intense red.

The development of these fruits needs the warmth, as on the other hand suggests the family of the Ebenaceae which includes only tropical species, and therefore in our places the edible kaki must be grafted on the Diospyros lotus , for getting a more resistant tree, formed by two components, distinct, even if genetically close. 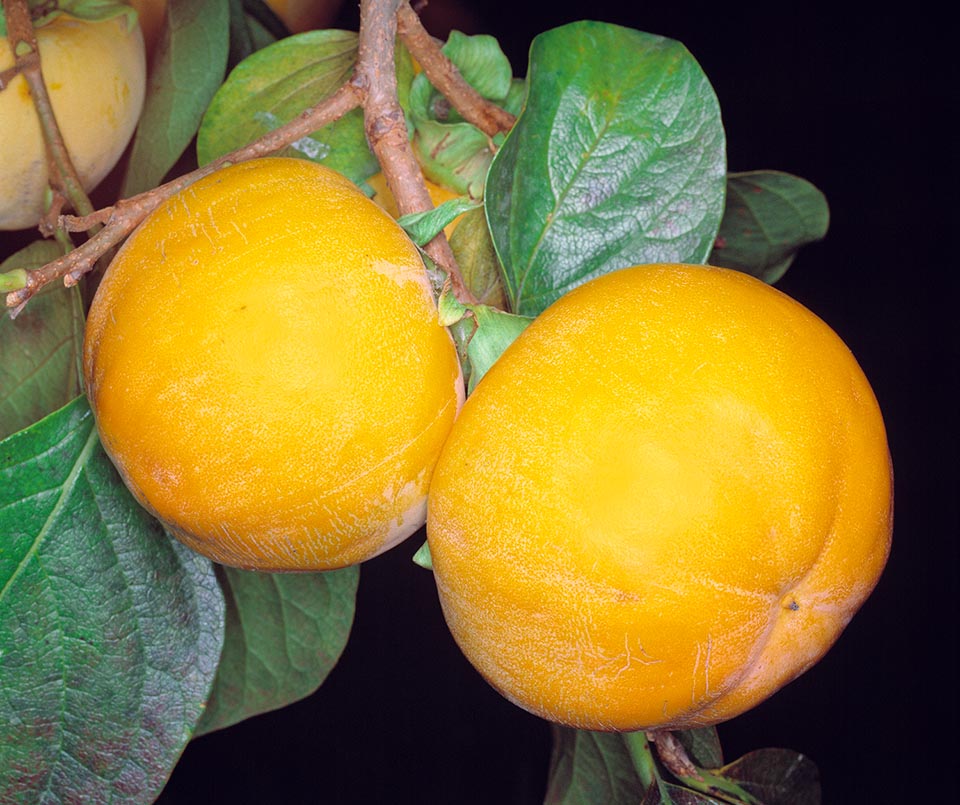 “Diospyros” in Greek means “food of Jupiter”, a delicacy, in a word, kept for the gods © Giuseppe Mazza

In the state of Virginia (USA), we find several native specimens of Diospyros virginiana producing fruits of a certain size, greater than th Diospyros lotus , but smaller than the Diospyros kaki , which, however, meet some difficulty in being consumed due to their high astringent powers.

Referring to the astringent characteristics, we classify therefore the kakis in the groups CFNA and CFA, and, with reference to the colour of the ripen fruits, which depends in the seeds, in the groups VFNA and VFA. Each one of these four groups contains many names of fruits cultivated all over the world.

The following list shows the characteristics of some varieties of fruits with constant expiration in the colouration of the endocarp and the two different options for what the astringency is concerned, for different ripening periods and natural harvest. Besides being, as we have seen, astringent and due to their size, little suitable for the alimentary utilization, the fruits of the Diospyros virginiana have shown also a certain toxicity. When, due to their great abundance in Virginia, the animals eat them excessively, they have often digestive problems with stomach pains. Due to its big rusticity, therefore, this species is utilized only as graft carrier for the cultivation of the Diospyros kaki .

In order to find the origin of this vegetable species, we have to look towards Asia and China, which, with Japan and Korea, has been the cradle of many fruit trees. And it is in Japan that we find the origin of the non astringent kaki, easily digestible without the unpleasant consequences present in the other group. 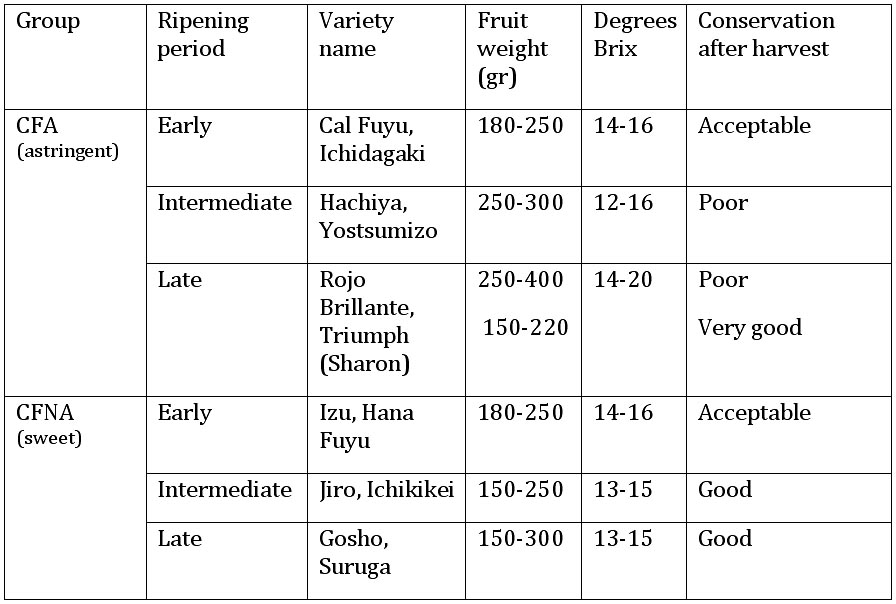 The introduction of the kakis in Europe has followed a way which differs from that of many other known fruits. It is not an old phenomenon, but it’s recent, and the provenance is not Asiatic, but American, from the USA, where they had come before for then, later on, to reach Portugal, Spain, France and Italy, during the XIX century.

With the time, have prevailed in Europe the astringent forms with a high contents of sugar (the kaki is the fruit with greatest contents of sugars in degrees Brix) and the possibility to preserve longer, without changing and losing their organoleptic characteristics.

We can also find fruits with the seeds, usually of big size, which come from the fecundation of a hermaphrodite flower or of female flowers with the pollen coming from a male flower. All these options of monogamy and dichogamy, along with the possibility of developing parthenocarpic flowers, increase the botanic richness of this species.

In the case of fruits with seeds, there can be several options of development in the ripening. At times, the colouration of the endocarp remains does not change in the zone around the seeds, at times the tissue wrapping them gets a colour completely different from the rest of the fruit. And some varieties have the pulp so dark, that they got the name of “Chocolate”.

The diffusion and the success of the kakis all over the world have adapted its cultivation to various temperate climates and to various soils, utilizing as rootstock the Diosporys lotus , in the draining and sandy grounds, and the Diospyros virginiana in the clayey ones, which keep the humidity. 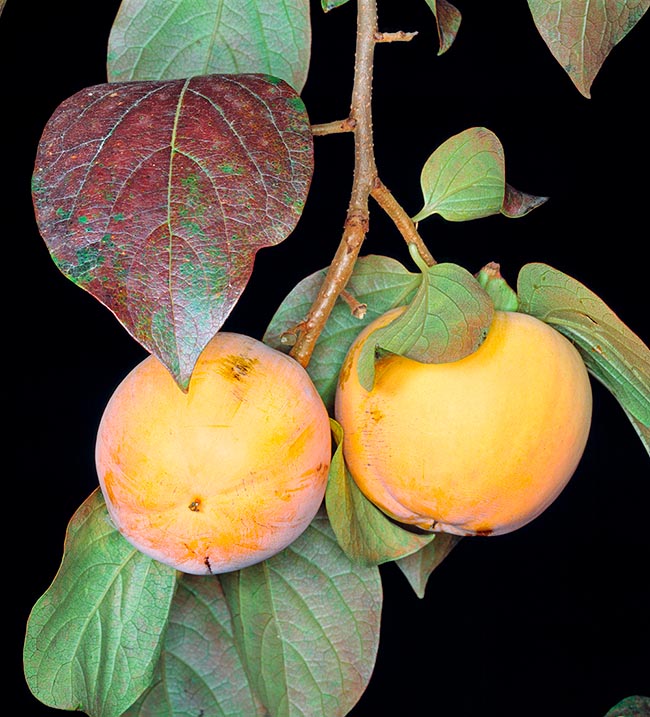 The wood, very valuable, is utilized in joinery © Giuseppe Mazza

The cultivated varieties adapt to both graft carriers, keeping in mind that anomalies can originate when non astringent varieties as grafted on the Diospyros lotus , the others are to be preferred.

In the cultivation of the trees, it is important to prevent the breakage of branches due to the high weight of the big fruits varieties, such as the “Bright Red”. In these cases it is necessary, during the arborescence, to avoid the formation of too wide angles of the branches in respect to an imaginary central axis of the trunk.

For getting a good production of fruits, the cultivation of these trees requires a good knowledge of the techniques of pruning, fertilization, irrigation and preventive treatment against parasites such as the Medfly (Ceratitis capitata) and some fungal diseases which may develop during the rainy springs or with the flooding of the cultivated parcels.

When these circumstances happen, it is important to fight timely the development of these enemies of the kakis.

In China and Japan, the production and consumption of non astringent fruits prevail, in Korea the astringent ones, like also in Brazil, where a research centre is located in Sao Paulo.

We have to make some distinctions for what the Mediterranean countries are concerned. In Italy, the variety of ‘Kakis type’ is the most common. They may have an astringent character when the fruits come from a parthenocarpic development, or they can be immediately edible, as non astringent, when the flowers are pollinated or the plants originate from seeds. Every year 60.000 tons are produced for domestic consumption and exportation.

In Israel, the late variety ‘Sharon’ is preferred, with its flattened shape, which is well conserved in the refrigerators. It is one of the sweetest varieties, and each year 13.000 tons are produced, meant for central Europe.

In Spain, the ‘Bright Red’ is triumphant; it is a variety with protected designation of origin, which is immediately remarked for the intense red colour. There is a very sweet form (classic) and another one with a firmer and more astringent pulp (persimon).

Due to the unusual size and the pleasant look, this big fruit is drawing more and more the attention of the European consumers. Every ear there are 55.000 tons produced and exported for the 60% in the form persimon.

→ To appreciate the biodiversity within the EBENACEAE family please click here.