The Disocactus flagelliformis (L.) Barthlott (1991) is native to central Mexico (mainly, states of Hidalgo, Puebla and Veracruz), where it prevailingly lives in the oak forests at around 2.000 m of altitude on trees and shrubs, to which it adheres with its aerial roots, or on steep rocks where its long stems which can freely hang down.

Epiphyte or lithophyte with thin stems with green-grey epidermis, mostly ramified at the base and up to 2 m long, with a diameter of about 2 cm, which can be climbing in presence of a support, thanks to its aerial roots, or hanging. 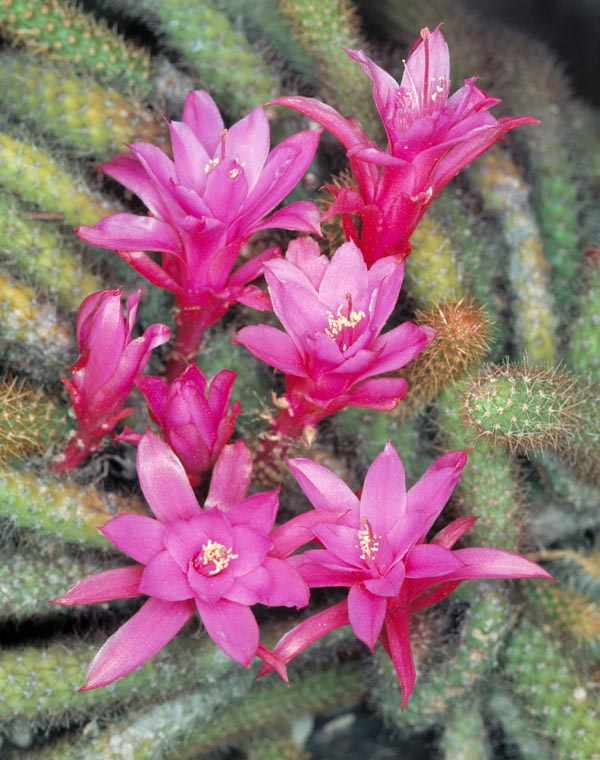 Disocactus flagelliformis is native to Mexico. The climbing or drooping stems may be 2 m long with a crowd of waxy flowers opening during the day for 4-5 consecutive days. Very easy species to grow © G. Mazza

It has 8-12 rectilinear ribs, not much evident with tubercles and areoles, spaced of 6-8 mm, provided with rather soft thorns; the 8-12 radial ones, are of brown-red colour and 4-7 mm long, whilst the 3-4 central thorns are a little longer and of a brown colour with yellow extremity; all the thorns, initially, are fully red.

In spring-summer, it produces lot of waxy flowers which open by day time for 4-5 consecutive days, 7-8 cm long and 4 cm broad, curved, usually of magenta colour, with outer lanceolate, bent backwards tepals, about 3 cm long and 0,6 cm broad, and oblong and straight inner tepals, about 1 cm broad; the pollination in the origin countries is done by the hummingbirds.

The fruits are globose, thorny, of red colour, of about 1-2 centimetres of diameter, with greenish yellow pulp, theoretically edible, containing some brownish ovoid seeds. It reproduces in spring by seed, just covered in sandy topsoil, or cutting to be placed, after having well dried up the cut for some days, on a sandy substratum; the new plant will begin to bloom after two or three years. The plant has originated several hybrids.

It is the most appreciated plant of the genus and the most utilized for hanging and raised pots; cultivated in Europe already by the beginning of the ‘700, it has had a rapid diffusion thanks to its particular characteristics and its facility of cultivation.

It is to be placed in full sun, or however at the most possible luminosity, on perfectly draining and well aerated topsoil, as its roots are very much sensitive to rottenness for humidity stagnation, which can be formed by common garden earth, leaves topsoils, or, missing these, by coarse peat and siliceous sand in equal parts, eventually some crushed stone can be added, in order to improve the draining. Its collocation in open air is limited to the climates where the temperatures around 0° c, are a short lasting exception, taking in any case care to shelter the plant from the winter rains, elsewhere, it is to be cultivated in pot. In summer, it is to be regularly watered; in winter is to be kept dry, with some rare watering if the stems tend to become wrinkled, and at temperatures between +5° and +10° C, this period of cold and dry rest is indispensable for the blooming.

As soon as the buds appear, it is better to effect some light fertilizations. In order to avoid the risk of rottenness, it is often grafted, for instance on Selenicereus grandiflorus. Being easily subject to the attack of parasites, like the “red spider mite” and scale insects, it is to be kept under control for being be able to effect a prompt action.

Disocactus flagelliformis was last modified: May 7th, 2018 by Giuseppe Mazza