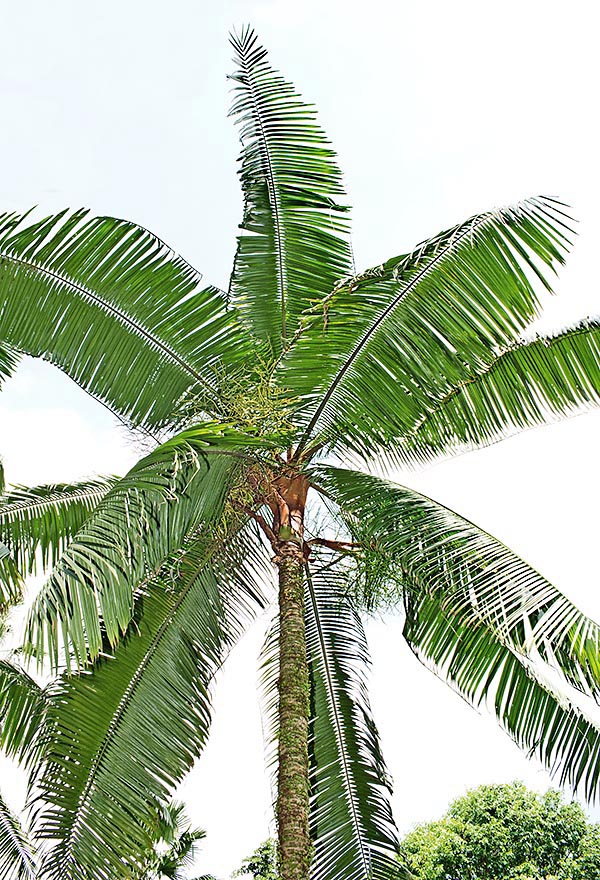 The species is native to north-western Madagascar, where it is present with few individuals in the gallery forests in the area north of Maevatanana.

The Dypsis leptocheilos (Hodel) Beentje & J.Dransf. (1995) is an unarmed monoecious species with solitary stem, up to 10 m tall and of about 25 cm of diameter, with slightly widened base, where are visible the rings trace of the junction of the fallen leaves, with about 12 cm long internodes which, in the youngest part are of green colour and covered by white pruina.

The leaves, on an up to about 17 cm long petiole, are pinnate, up to about 4 m long, with linear pinnules with pointed apex, slightly drooping, close to each other and regularly arranged along the rachis, long in the central part up to more than 80 cm and 4 cm broad, of glossy intense green colour. The foliar base, about 60 cm long, is covered by a thick brown reddish tomentum and envelopes only partially the stem in the outer leaves.

The inflorescences, up to 1,7 m long, generate among the leaves (interfoliar) enclosed in the initial phase of growth in a woody spathe, deciduous, covered by reddish tomentum, with three orders of ramifications and unisexual flowers of pale yellow colour merged in groups of three (a female flower amidst two male ones).

The fruits are globose of dark brown colour, of 1-1,2 cm of diameter, containing only one globose seed, pointed at the base. It reproduces by seed, previously kept in water for 24 hours, in draining loam kept humid at the temperature of 22-26 °C, with germination times of 2-4 months; the first leaflet is pinnate. Species of great ornamental and landscaping effect, as isolated specimen as well as in group, due to the long and elegant leaves, the slender stem and the foliar sheath of particular colour, cultivable in full sun or slight shade in the tropical and subtropical zones, its cultivation may be tried, marginally, in the temperate-warm zones as it is able to bear values of temperature around the 0 °C only if rare and of very short duration.

Fast growing, it is not particular about the soil, even alkaline, but grows better in the fertile, neutral or slightly acidic ones, provided draining and abundantly watered during the warmest months. Young specimens can be utilized in pot for the decoration of verandas, patios and very luminous spacious interiors.

Due to the reduced number of specimens, five, found in nature, in 2012 it has been inserted by the International Union for Conservation of Nature (IUCN) in the red list of the species threatened of extinction as “Critically Endangered”.