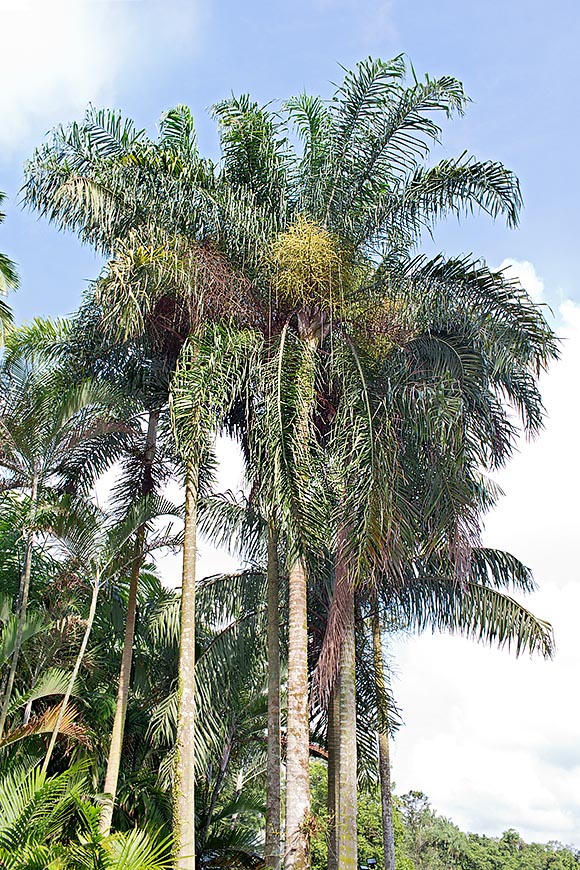 The species is native to north-western Madagascar where is rather diffused in the pluvial forests as well as in the dry semi-deciduous ones, at times close to the beaches, from the sea level up to about 600 m of altitude.

The Dypsis madagascariensis (Becc.) Beentje & J.Dransf. (1995)) is an unarmed monoecious species, solitary or in groups of 2-4, with stems up to 18 m tall and 10-22 cm of diameter of green colour in the youngest part, greyish in the more aged one, on which are visible the rings trace of the junction of the fallen leaves, with 5-12 cm long internodes.

The pinnate leaves, on a 12-40 cm long petiole, are arranged on three rows (tristichous), up to 3 m long with pinnules irregularly arranged on the rachis in groups of 2-3, inserted at different angulations, lanceolate with pointed and hanging apex, at the base 60-120 cm long and up to 1,5 cm broad, in the median part 50-95 cm long and up to about 2 cm broad, of green colour on the upper page, green grey below.

The 40-60 cm long foliar base, of green colour and covered by a whitish waxy patina, wraps only partially the stem in the innermost leaves and is completely open in the outer ones. The inflorescences, 1-1,5 m long, generate between the leaves (interfoliar) enclosed during the initial phase of growth in a deciduous bract, with peduncle initially covered by reddish tomentum and 3 (rarely 4) orders of ramifications carrying unisexual flowers of greenish yellow colour united in groups of three (one female flower between two male ones).

The obovoid to ellipsoid fruits, are about 1,5 cm long and about 0,8 cm broad, of green colour tending to purple when ripe and covered by a waxy patina, containing only one seed almost ellipsoid of about 1 cm of length. It reproduces by seed, previously kept in water for three days, in aerated and draining loam kept humid at the temperature of 22-24 °C, which germinates in 1-2 months; the first leaflet is bifid. Fast growing species diffused since time due to its ornamental characteristics out from its origin zone, cultivable in the tropical and subtropical climate zones, its cultivation may be tried in the milder warm-temperate ones, where values of temperature close to 0 °C are exceptional events and of very short duration.

It requires an exposition in full sun and is not particular about the soil, provided the same is well drained, and can bear, when adult, periods of dryness even if it grows at the best in soils kept humid; palm of great effect as isolated specimen as well as in groups of in line on the sides of road and alleys, furthermore, it resists to the saline aerosols, and therefore it can be employed close to the sea.

The stem is used in the buildings and the “hearts of palm” (the vegetative apex and the most tender and innermost part of the sheathed leaves), of excellent taste, are used locally, fact that has contributed in reducing its population.